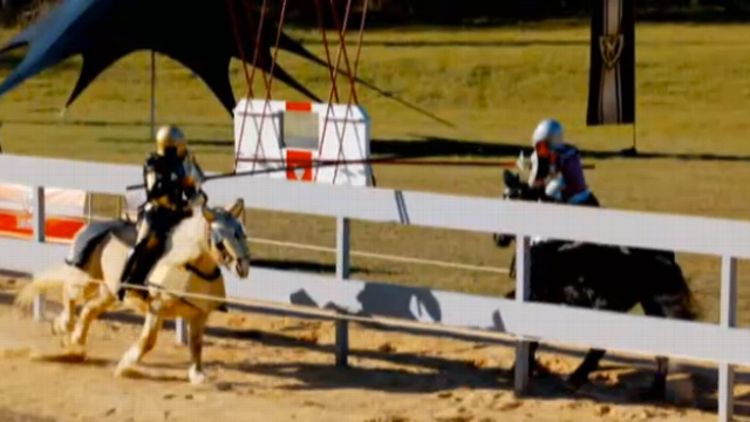 When “Sunday” and “television” are mentioned in the same sentence, attention immediately goes to Mad Men, Game of Thrones, and NBA basketball. While there’s nothing inherently wrong with this, I propose expanding that three-part lineup to four. That fourth piece of television programming:

The show, which airs on Sunday nights on The History Channel, is a reality competition centering on head-to-head, full-contact jousts, with players eliminated each week until a champion is crowned. Through eight weeks (of a 10-week season), I can honestly say this is one of the more realistic-seeming reality shows I’ve ever watched, because there’s not much in the way of cooked-up storylines that make you feel like you’re watching a loosely scripted dramedy with a grand prize at the end. It’s simply a show about a bunch of dudes who really want to be the best jouster on Earth. Plain and simple.

I would say top that, but I know you can’t.

Anyway, when word got out that Matt was slated to be on a jousting reality show, I immediately knew we had to catch up and chat. We talked early in the series, but I was initially hesitant to run a portion of our 45-minute conversation because, to put it plainly, I needed Matt to SHOW ME SOMETHING. Well, after last night’s stressful but victorious performance, Mr. Chumbawamba himself made it to the semifinals of Full Metal Jousting. The real Final Four. I know some of you are currently quite proud to be Jayhawks or Wildcats, but that really has nothing on watching someone you know compete in “the most dangerous sport in history.” And win. Repeatedly.

An excerpt from our conversation:

So, Matt, how did this happen? We graduated high school together, but only one of us is on Full Metal Jousting. Please explain.

About fourth grade, I started reading the Redwall series by Brian Jacques and I was immediately fascinated by medieval lifestyle and, in particular, the warfare and weapons that they used, so I’d say that’s where the passion began for me. It lasted all throughout school, with my most common reading experiences involving fantasy, which involved medieval themes, combat, and warriors. After high school, I’d say that’s when we took pretty different paths. I took two years off from school and did some traveling, and then got a job at a Medieval Times castle as a theatrical jouster in Atlanta, and that really prepared me for the show more than anything else, because I learned about the horsemanship. You know, it’s very difficult going from a civilian, standard-school student to being a full-contact jouster.

Outside of the mainstream sports, your basketball, baseball, football, hockey, etc., there’s often a discussion about what constitutes something being a “sport.” Would you call jousting a “sport”?

That’s an interesting question. The definition of what makes something a sport is always under contention, like people are curious to know why curling is a sport. It’s almost like, what is art? I think by comparing jousting to other sports, especially to other “extreme sports,” it’s clear jousting is, in fact, a sport. It requires a lot of physicality typical of a sport and a high level of skill. Actually, a level of skill you don’t see often in many sports. I don’t know if you’ve ridden a horse before, but that in itself is difficult, and then being in the armor makes in more difficult, and then having to do something in the armor makes it even more difficult. Yeah, it’s very complicated.

Thinking about the show, I never even considered the horse as part of the equation. Like, the horse as a variable. How important is the relationship between the rider and the horse?

Anyone who’s ridden a horse before knows that they have different personalities and are all distinct individuals and they might play a larger part than most people think. The horses are essentially our teammates; in a joust it’s basically two individuals against two individuals. I had to learn which horses I got along with, which horses were similar in temperament to me, and which horses I felt a connection with, and honestly I think that’s a crucial and underreported aspect of the show. The connection with the horse is basically a two-man team.

So you’re on reality TV now. That’s crazy. What’s your take on the genre of reality TV?

The ones that seem to dominate the genre, the Real Housewives, they tend to be very contrived and really hard to watch for me, even though there can be some of that train-wreck captivation. I really think ours is doing a really good job of being an honest production of a real-world competition.

Responding to that requires a great deal of thought, but off the top of my head, I can agree. If you qualify dangerous as “who is injured or dies the most in a sport,” I’m sure there are people that collapse from heat exhaustion when they train, but the actual sport, the conducting of the sport, the actual joust, I would have to agree, without any research of course, that it is probably the most dangerous sport out there. Because of the impact involved. If you get injured accidentally in jousting, the consequences are far more severe than any other sport out there. If someone accidentally punches you in the wrong place in an MMA fight, you might be sore or get a broken nose, but in jousting you can get killed. You can get killed if something goes wrong.

When you say something going wrong, what do you mean?

An example of that, using a historical example, would be … I can’t remember which king it was …

[Shouted, as if I were the suck-up at the front of class] KING HENRY II!

Yeah, King Henry II. Good, you’ve done your background research. King Henry II, he was killed, with just a slither of a lance, right through the eye. That type of thing, the freak accidents, they happen. I could estimate any number of things that could go wrong, like if your armor isn’t properly situated or attached, that can make it a life-threatening situation. If you fall off the horse with all that armor on, and fall on your neck, that’s a lot of weight to end up on you. So yeah, it is definitely an extreme sport.

Have you had a really bad injury jousting?

Hiltman: I can’t tell you everything, because the show isn’t done yet, but I can say I have experienced one of the most painful events of my life while jousting.

Well, I’m glad the show has already aired because that means you’re still alive. Thanks for the chat.

The only excuse for not tuning in next Sunday is your late-night Sunday jousting league, which I know you aren’t in because you’re a coward, just like me. So watch it.

The New Kendrick Lamar/Dr. Dre Song, and Other Examples of Egregiously Obvious Ghostwriting