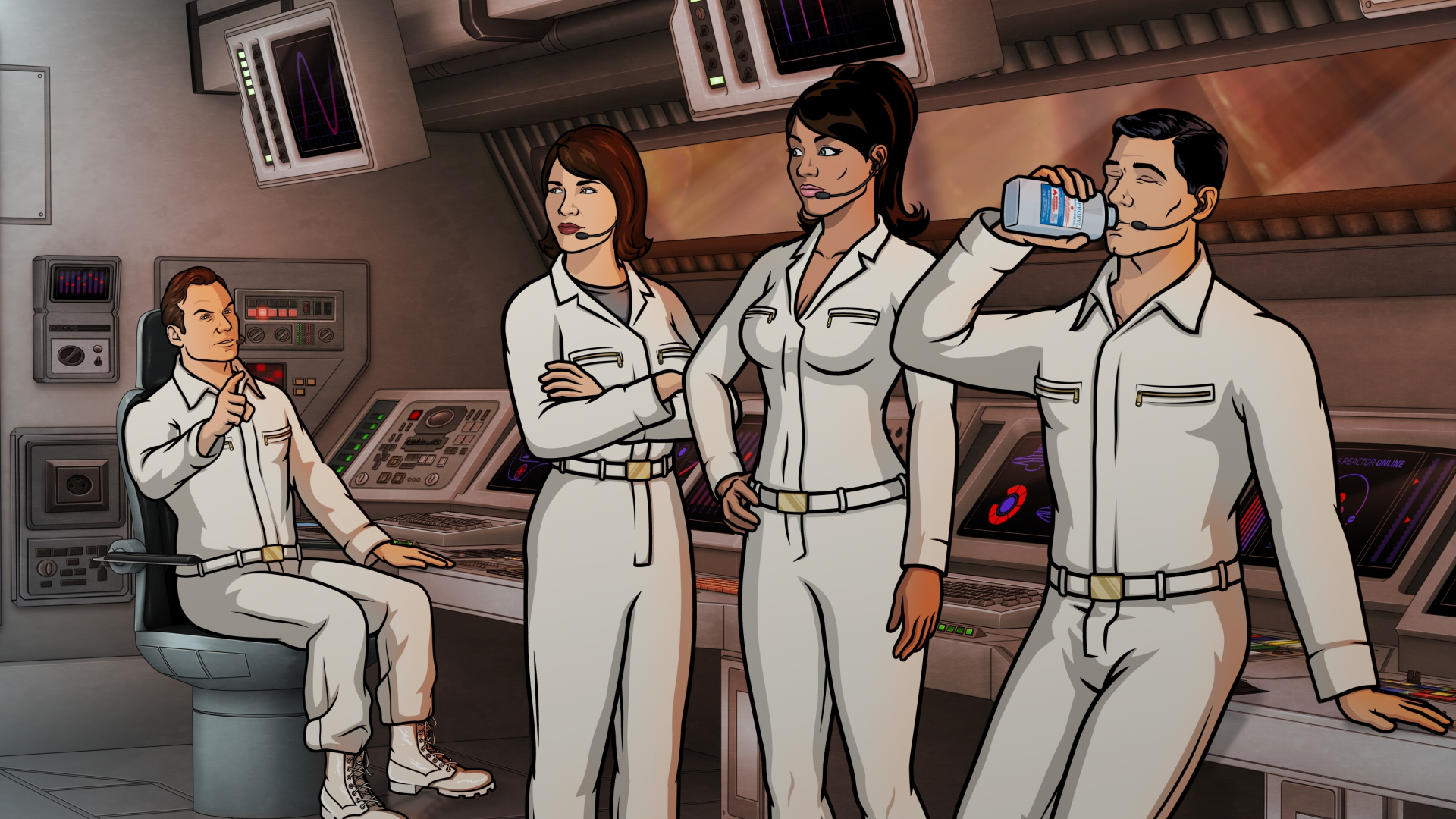 Behind an unmarked door in a mixed-use development in midtown Atlanta, deep in a warren of industrial-chic loft spaces, four heads huddle in front of a video monitor. The crew behind Archer is preparing to send the last act of the season’s final episode off to FX for approval, and the producers in the edit bay have circled back to one shot for changes.

“Does that liquid effect look too fakey?”

“I wondered about that, but you laughed at it.”

“I was laughing at the line delivery.”

On the screen, Sterling Archer and Pam Poovey bob in identical white diving suits, exchanging quips and firing a laser gun at encroaching leukocytes. They’ve been shrunk to the size of blood cells in order to enter the body of a scientist and blast apart a blood clot in his brain, and the guys in the room are worried that the sea of blood plasma their characters are floating in doesn’t look quite realistic. This is something of a unique television problem, and this is the kind of argument that comes up every day at Floyd County Productions.

With its sixth season in the books following Thursday night’s finale, Archer is well and truly into middle age, which still seems to surprise anybody having anything to do with the show itself. FX’s half-hour enfant terrible of adult-oriented animated series has blossomed from cult success to reassuring fixture, and along the way, it’s passed some kind of international date line of influence and come sneaking up on youth culture from the other direction. The day I dropped in on the show’s home studio, the teaser poster for Spectre had just been released, the one with Daniel Craig wearing a black turtleneck and staring soulfully into middle distance. Floyd County Productions employees’ Facebook pages had been bombarded with messages all day: “James Bond is ripping off Archer!” There’s a fresh swath of audience out there that wasn’t raised on Sean Connery or Steve McQueen, and takes Archer as its source material for midcentury modern office furniture and tactical cashmere machismo. The show’s creators, middle-aged themselves now, can only shake their heads and laugh.

On the day of my visit, the crew was deep in the final, frenetic stages of completing that final episode, before settling down to a relative hiatus. There’s animation cleanup work to be done here and there, DVD extras to finish, before the work on the seventh season begins in earnest in May. Creator Adam Reed has already peaced out for his regular between-seasons mental detox; when I asked about him, everyone gave me an identical answer: “Adam is walking through France right now.”1 Writing every script of every episode makes for a grueling work schedule, and every year as soon as his most pressing obligations are done, Reed takes off for France, Spain, Vietnam — anywhere he can ramble to clear his head, freeing up mental space to formulate the next season between his ears.

And once again, an Archer season finale has ended on a sort of low-octane cliffhanger. Everyone’s alive and well (well, Ray’s paralyzed again and maybe septic, but haven’t we all come to expect that?), but our intrepid heroes are facing another crossroads, having all just lost their jobs as CIA contractors. So what’s next? Archer, donning his mirrored shades, closes out the season: “I actually have some thoughts on that.” (What those might be, right now Reed only knows.) Archer is facing a kind of creative quandary that’s still new to this particular group of artists, one that’s never had to worry about staving off staleness. The creators of Sealab 2021, Frisky Dingo, Unsupervised and Chozen have never shepherded a program with this kind of staying power before. This is everybody’s first time facing this sort of challenge. Now what? 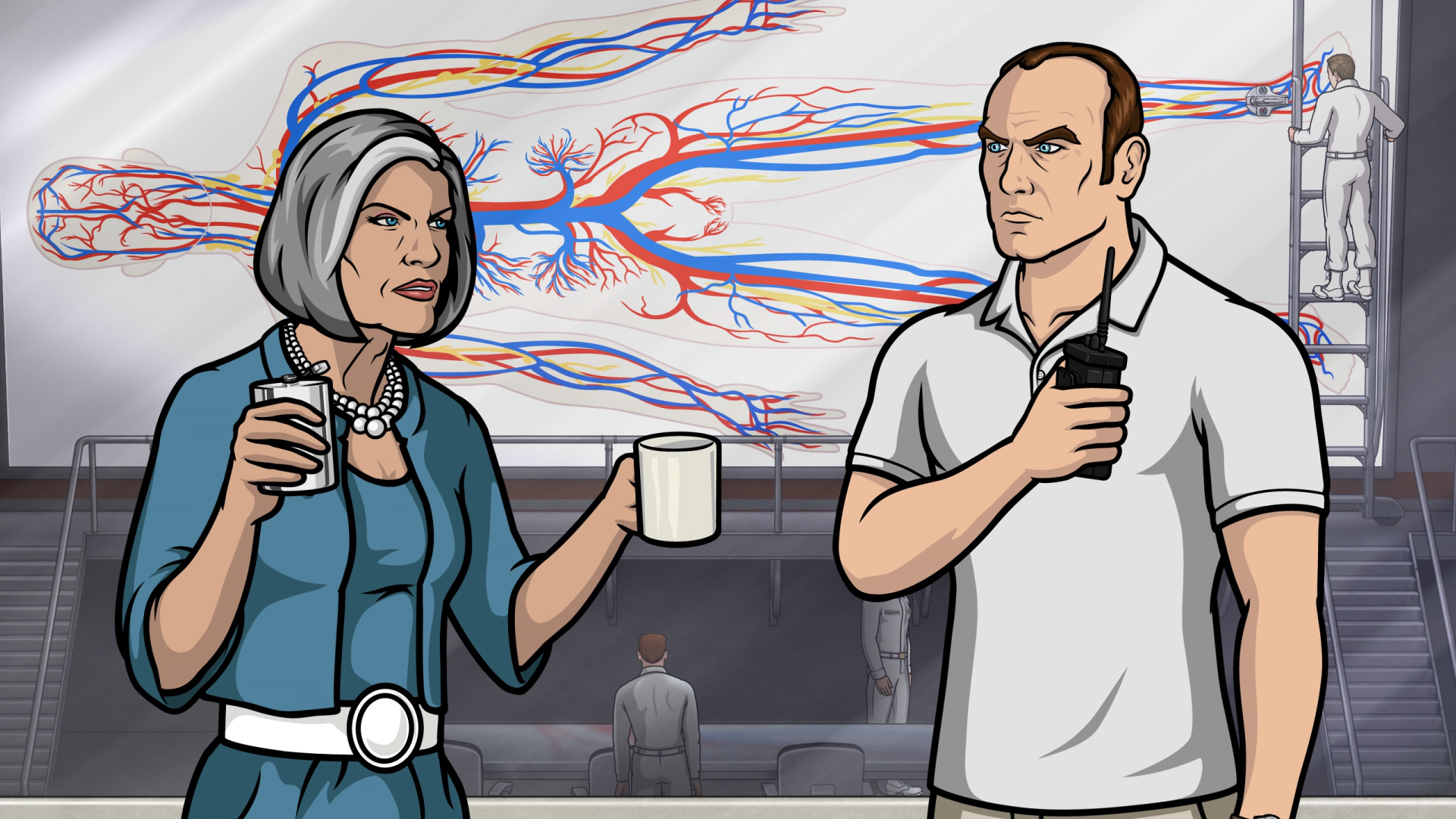 When I spoke with executive producer Matt Thompson just prior to this season’s premiere, one thing that really stuck out was his surprise at his own show’s longevity. It’s not something any of Archer’s upper management team [really] saw coming, because it was new to every one of them, as was the process of creating and running a half-hour show. It’s been almost 15 years since the premiere of Sealab on Cartoon Network, close to a decade since Frisky Dingo first dropped, and both of those shows were made with an eight-person crew running out of a one-bathroom house in East Atlanta.2 That farm system produced Archer’s top creatives: Casey Willis, who started as an intern back in the Adult Swim days, now serves as a co-executive producer for the show alongside Thompson and Reed.

“For the longest time,” said Willis, “it was just this little tiny core group. And then when we started Archer, we doubled the length of the show and had to expand very quickly. And we were all, ‘Wait, now we have to learn how to manage people?’”

From that one cramped house, what’s now Floyd County Productions has ballooned into an operation light-years more professional, if still not quite corporate. The creative team that mined Cartoon Network library footage for Sealab now pillages pop culture from a central bullpen housing over 100 artists, about 70 of whom are devoted to Archer at any given time.3 Each episode takes about nine weeks, from delivery of the script by Reed to delivery of the episode to FX, to produce. Episode material moves in shifts throughout the bullpen, from art direction and storyboards to illustration and backgrounds to the animators, with audio coming in somewhere in the middle. It’s an atypical process for an animated show,4 but it’s been Thompson and Reed’s preferred work flow since their Adult Swim days.

“I think about the show like it’s a live-action show that’s been painted over,” said animation director and producer Bryan Fordney, “rather than a cartoon in the traditional sense. We break up our scenes like you’d storyboard a live-action shoot. We have our environments made in 3-D, we place our camera where we want to put it, block our characters, just like you would on a real set, and I think that’s the essential difference.”

All the creature comforts of the studio have been supplemented with cozy relations at the network level. “They’re really good,” said Sims, “at trusting the genius person that came up with this to do genius things, and not picking stuff apart and chiming in just so they think they’re doing something. And I give them credit for being like that right out of the gate.” FX even outpaces the producers, on occasion, in its desire to push the show to the edge of cable television acceptability. The creative team still laughs about being told they could actually make the rampage scenes bloodier, but even they were shocked when a borderline-explicit sex scene between Archer and Lana in this season’s “Pocket Listing” episode sailed through Standards & Practices without comment.

“We went hardcore with the animation on it,” said Hurd, “thinking they’d go, ‘WHOA WHOA WHOA,’ and FX was totally cool with it. With what we originally had. And then we decided to bring it in a bit. It was … the first pass was a lot.”

“I think that animator was really working out some issues,” said Willis. “That was our joke in-house, that now we know how this animator has sex.”

“And he owes that lady an apology,” said Sims. 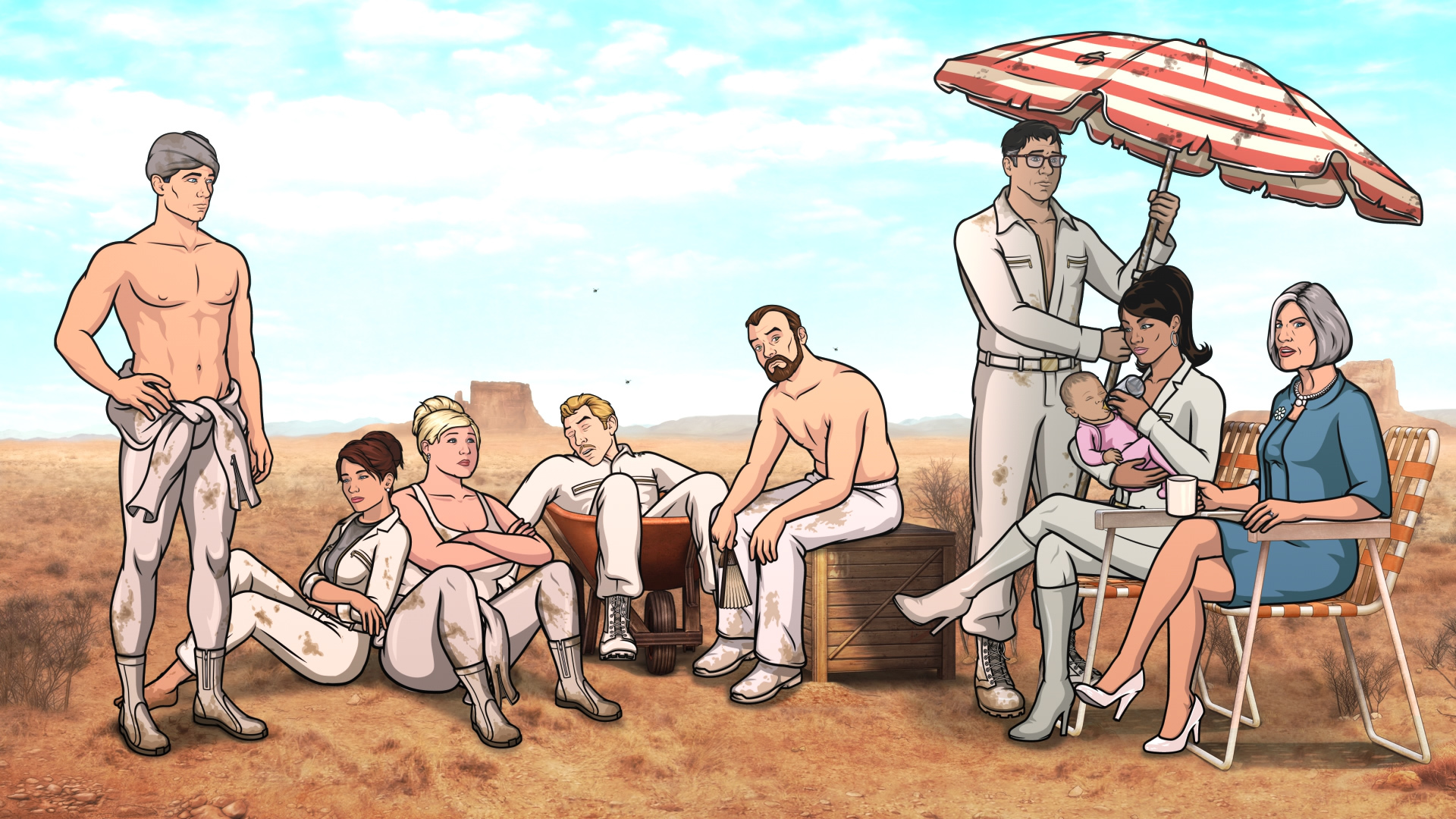 Lana: Archer, listen to me. I know you think you’re invincible.

Archer: Plus, now I have a laser backpack.

Lana: But you’re a father now —

Archer: WITH A LASER BACKPACK.

Lana: Shut up. And please, be careful.

And now there’s a really interesting push-pull dynamic shaping up here between Archer and its audience: What do you do, this far into the lifetime of a show, when you’re provided with every possible security and want to do something different? Especially if it’s your second attempt, and the first backfired? Thompson somewhat defiantly refers to the Archer Vice season, which famously divided both critics and fans, as his favorite, and as the show returned to its more Archer-ly roots this year, streaming technology has allowed its producers to be haunted by new fans of last season’s work. “So many people I talk to,” said Willis, “that’s how they watch the show. So they’re still a season behind, saying, ‘Hey, I’m watching Season 5 and it’s fantastic!’ And I’m going, ‘I wish you had been around when Season 5 was still on the air!’”

You can’t help but wonder what might have happened had the original plans for the sixth season proceeded, with the entire central cast in prison for the drug-baron antics of Vice. “That was going to be hard to do,” said Willis. “The show’s best when everyone’s together, and how was that going to work in prison? And then at the same time, Orange Is the New Black hit big, and we were like, ‘We’re not going to be able to do prison that good.’” It’s that sentiment, to me, that sets Archer apart creatively, the idea that prestige premium-cable programming can be considered a peer. That there’s a creative team working in animated television that takes the time to argue what the actual science of shrinking the human body to the size of a molecule might look like, and how that should affect their show’s visual gags. That kind of craftsmanship is something that should always be celebrated.

So with that in mind, where do they push it from here? Where do you go, when you can go anywhere? Professionally, the show’s staff is comfortable, secure in their relationship with FX and already contracted for a seventh season. Artistically, how do they punch a fist out of that cocoon, with the knowledge that whatever they try next might end up garnering the same reception as Vice? It’s not the worst problem to have. Archer exists out of time and has the entirety of recorded human entertainment to mine for laughs. With the most recent episode culminating with the gang’s ousting from the CIA, for all we know there’s another reboot germinating in Reed’s head. That head’s in France, picking a path through an option paralysis minefield. (Again.)