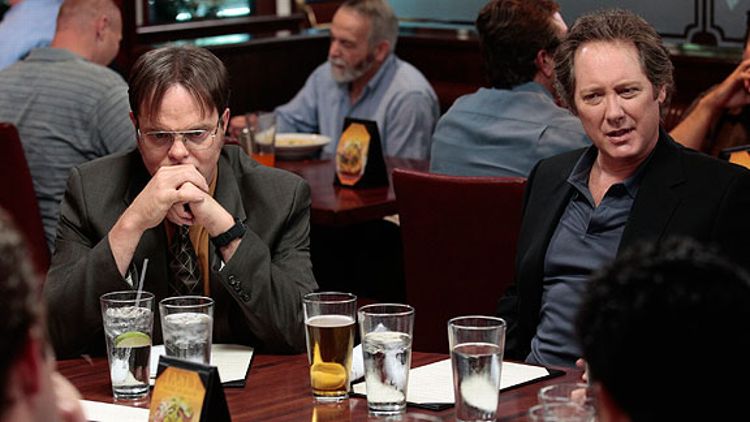 1. The Office
Early in the jam-packed opening moments of this first episode The Office’s eighth season, delightfully dotty receptionist Erin attempts to explain the Jay-Z-endorsed Internet phenomenon of planking, which has swept Dunder-Mifflin as thoroughly as the mumps have hit Pawnee. “You either get it or you don’t,” she enthuses sweetly. “And I don’t. But I’m excited to be a part of it!” One got that feeling a lot in “The List,” the first salvo of the Post-Carell era, a good-natured mish-mash of quality joke craftsmanship and stalled-out storytelling. Before the familiar credits even started up, we were inundated with plot — James Spader is the new Kathy Bates! Ed Helms is the new Steve Carell! Stanley has a sense of humor now! — but, beneath the surface, the familiar engine was puttering along. Consider it a margarita pizza in Scranton: just a fancy name for the same old pie. But, hey: pizza is pizza!

To be fair, the show is in a challenging position. It long ago settled into the doughy, dependable middle-age endemic of all long-running sitcoms, the moment when the tide shifts and the audience begins tuning in for stability rather than suspense; when there’s no more foreplay to be found amidst the various pairings and partnerships and the stories begin to tend towards resolution and mushiness: call it the cuddling period. Yet no sitcom in history has navigated these still, windless waters better than The Office. Marrying off Jim and Pam may have made storytelling more challenging, but it “felt” right; any time character interactions began to drag the producers would whistle for a subsititution from the UCB. It was a credit to the steady backstage hands on the rudder that the four episodes after Michael Scott got his happy ending last spring were actually the most satisfying. Show-runner Paul Lieberstein (who doubles as HR punching bag Toby Flenderson) managed to turn our cuddly comfort with The Office’s nine-to-fivers into the central argument for watching. The Office has the deepest bench in television, an ever-expanding ensemble in which every personality is sharply drawn and fully capable of supplying a necessary zinger. (Last night was a perfect example of the joke buffet on offer in the writer’s room. Dumb joke? Kevin. Hipster joke? Ryan. Slutty joke? Meredith. No joke? Jim. Poor Jim.) At Dunder-Mifflin it’s always the singers, not the song — especially when, after eight years, we can whistle the tune in our sleep. But can a sitcom subsist on a steady diet of role-players? Does the Ewing Theory extend to television?

The answer, for last night at least, was a definite maybe. The re-introduction of James Spader — and James Spader’s fascinating body — as charismatic crazy person (and new CEO) Robert California suggests the need for a new power dynamic in The Office. Yet Spader’s trademark scenery chewing has been softened by too many years of craft-service-table chewing; he’s reduced here to a conference-room enigma, a neutered power figure who can play mindgames (like dividing the cast into “winners” and “losers”) but nothing more: at the end of the business day, The Office is still NBC’s sole comedy hit. No real changes can be made at any level, other than, say, the occasional new baby for Pam and a well-deserved can of soda for Darryl.

The elevation of Ed Helms — the de facto next most famous person in the cast — to the manager chair was more problematic. For years, Andy Bernard has, like Meredith’s drinking, worked best in moderation, his craven need for attention pitched at a slightly higher, more Madras-y tone than Michael Scott’s. Now we get to see him fumble for respect and tie clips on a permanent basis, a decision as safe, rational and apt as Robert’s observation of the dangers of Elmo. Within the hermetic world of this forever fixed professional family there were still laughs aplenty — it really has been a medium year for women’s soccer and we’ll give a Dundie to the first person who makes a .gif of Dwight blasting Meredith off of the top of the men’s room stall. But plot-wise, it was no steps forward, no steps back — though the Nard-dog would probably try and call it a fox trot.

Of course, this idea that sitcoms have to maintain forward momentum is a relatively new one, a product of our overly-serialized, dedicatedly DVR’d age. But it’s also something that the original British Office and the first few years of the Americanized version perfected: there was a tangible, often hilarious desperation to these characters, in their need for respect, for love, for escape. Now we’re meant to celebrate their futureless fate. Yet we were once perfectly happy to while away the seasons in Cheers regardless of who Carla was married to — and by the end, they had given up trying to pair up Sam and Rebecca. It honestly didn’t matter as long as the beer was still cold and Norm was there to drink it. So there’s precedent — and some few remaining tendrils of romantic potential as Andy will inevitably woo and win his ginger prize, Erin. But the test for The Office this season will be overcoming the very problem that Seinfeld once trumpeted from the very same Thursday perch: it’s become a show about nothing.

2. Parks & Recreation
In a typically reflective pre-season interview with Alan Sepinwall, Parks showrunner (and international cricket enthusiast) Michael Schur spoke about the complicated considerations that go into the making of your weekly comedy sausage. “It’s not just a perfect, delicate, beautiful butterfly that’s slowly unfolding its wings over the course of an entire season of TV,” he said, speaking of the decision to officially won’t-they Leslie Knope and Ben Wyatt after an entire season of successfully flirtacious will-theying. The break-up — handled, in typical Parks fashion, both gracefully and outrageously thanks to mountain man Ron Swanson’s unorthodox approach to fish shooting — was, as Tom Haverford might put it, “a baller move, pun intended.” It was risky, yes, but it also felt true for a show that, unlike The Office, continues to spin story at an outrageously productive rate. In contrast to their blue-collar peers in Scranton, those that populate the Pawnee Parks department aren’t fixed in their orbits around each other. And so constantly wonderful things can happen at any time, be they Andy’s improbable promotion (spurred by April’s equally improbable competence at both advice-giving and office-managing), Joe’s surprising academic history at Sarah Lawrence (“I wanted the small college experience!”), or the revelation of Jerry’s titanic, hopefully mumps-free dong. Parks’s unprecedented, undefeated third season run seems to have survived the summer unscathed. If only the same could be said for Ron Swanson’s feet. “I have the toes I have,” he snarls, just before returning to face Patricia Clarkson as icy ex Tammy No. 1, a terrifying refugee from Bravo’s Real Housewives of Hoth, “let’s leave it at that.” Done and done.

3. Community
Enthusiastic airhead reporter Perd Hapley to Leslie Knope last night: “I don’t know what you mean but it had the cadence of a joke.” Sounds like ol’ Perd is a Community fan! The hardest show on television to love (and, judging by the ratings, to watch) returned last night with its hackles raised, spitting and sputtering with meta references, half-hearted apologies, and the sour, self-aware aroma of a show expecting to be cancelled — and that somehow it’s all our fault. “We’re gonna finally be fine!” the cast — save Chevy Chase who either can’t be bothered or no one on staff is brave enough to ask him to sing — belted in an extended opening number, declaring their intentions to be less weird. Fat chance: the season premiere sprayed us all with monkey gas from right from the jump, doubling down on over-exposition (Pierce is in the group, except he isn’t, because people change, except they don’t) and stunt-casting. (Poor Michael Kenneth Williams. We tried to warn you!) Sweetly-addled Abed spent the half-hour in a tailspin due to Cougar Town being moved to midseason (never a good sign) and was forced to suffer through YouTube clips of the dark British serial Cougarton Abbey right up to its mass-suicide conclusion. Cue Britta’s fourth-wall observation that U.K. television is superior due to its sense of “closure.” It’d be better for Community if the showrunner kept his eye on the ball instead of the game clock. (And maybe keep John Goodman out of the ham aisle while he’s at it.) A constant complainer is about as likable as the opposite of Batman. Still, if this is (almost) the end, it would be entirely fitting for Community to go out while riffing manically about going out; from nostril to rectum, nothing but a perfect Moebius strip of jokes about making jokes about jokes.

4. Whitney
Who thinks the laugh track is this good of an idea? Who makes a Dr. Quinn Medicine Woman joke in 2011? Who reduces male/female relationships to tired gags about cavemen and calf-implants? Who fits into the Thursday night line-up as well as Ted Nugent at a PETA convention? And, most of all, who sleeps in a bed surrounded by that many windows?!? Carnac out!

How are Win Butler's Basketball Skills?