The World Is a Vampire: The Pleasures of ‘A Girl Walks Home Alone at Night’ 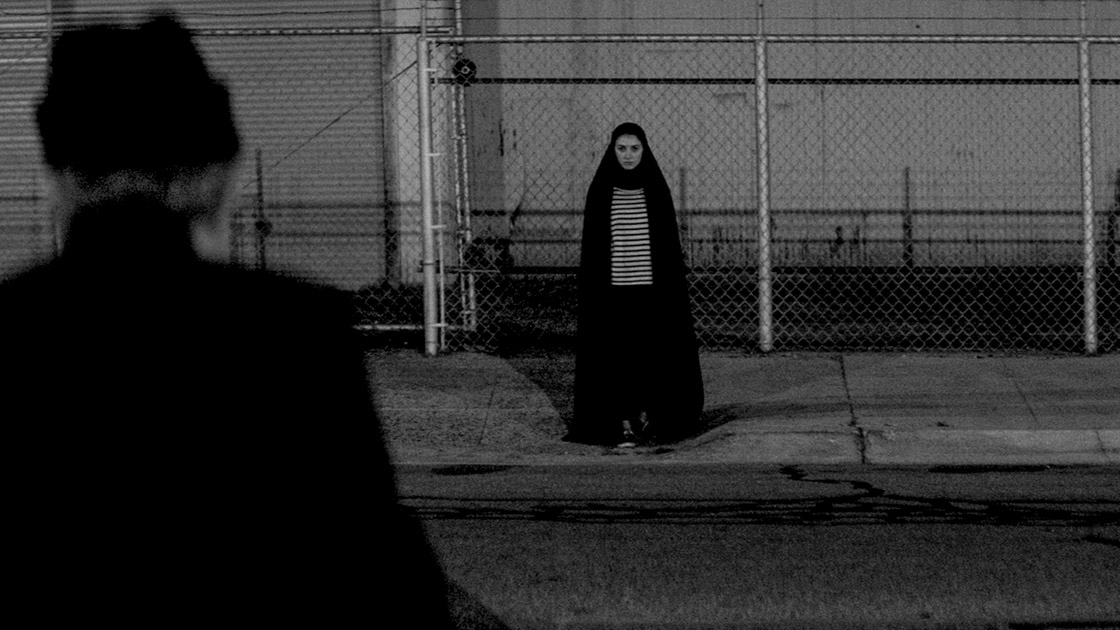 In the era of manifold information, of content nausea, and direct-to-YouTube film releases, creators and publishers go to grosser lengths than ever to distinguish their work. As a result, I’d understand if you viewed with suspicion the label that’s been attached to A Girl Walks Home Alone at Night, the supercool writer-director (and winner of the Bingham Ray Breakthrough Director Award at Monday’s Gotham Awards) Ana Lily Amirpour’s first full-length effort: “Iranian vampire-Western.”

Others have added the word “feminist” to the beginning of that long string of adjectives, because the plot — a wraith-like vampire known only as the Girl, played astoundingly by Sheila Vand, preys on misbehaving men in a fictional oil town called Bad City — can easily be read as sharp-toothed gender theory. Amirpour has resisted that last description, though, claiming, in interviews, that calling the film feminist says more about the person doing the labeling than about the director or film being labeled. As for the film being particularly Iranian, or part of a Western tradition, it goes as far as her adoration for the filmmakers she loves, including David Lynch, Sergio Leone, and Lars von Trier.

Even though I see the movie as part of a long line of female-revenge films like Ms. 45, Sympathy for Lady Vengeance, and Kill Bill, I think Amirpour’s refocusing of the conversation is fantastic. This movie is cool as shit. And to bog it down in theory and metanarrative, even ones that might feel welcome or admiring, is to miss the point.

A Girl Walks Home Alone at Night has six main characters. There’s the Girl, played by Vand, a sort of French-Persian hybrid who sashays around her room to ’80s synth-pop and is characterized by, one, her chador — the covering that gave Amirpour the idea of an Iranian vampire in the first place — and two, her fishing shirt and bob haircut. Everything about the Girl is seductive and iconic; she appears to be free of men, to transcend men entirely, but even more than that, she is a perfect aesthetic creation — she fills the frame like an idol or a dream. Partly, this comes from Vand’s portrayal, which is equal parts cool and unhinged. When the Girl does contend with emotions, she doesn’t change; instead, she flirts with the idea of being human like a normal heroine might with a man.

Unlikely as it might seem, this is a love story. Her counterpart in romance is Arash, played by Arash Marandi, a comically pretty spiritual descendant of James Dean. Arash is a goofy greaser, glistening and stupid, and his innocence, or innocence relative to everyone else, becomes his defining quality. Rounding out the cast is a prostitute, a gangster, an opiate-addicted father, and a little boy; there’s no narrative fat here.

There can be cinematic fat: Amirpour’s style is one of excess and exploration. She’ll often stay in scenes for as much as a minute longer than seems necessary, until the image she’s trying to convey has been screenprinted onto your brain. Sometimes, this can drag, and the movie is overlong, but I’m sympathetic to the intention, because when Amirpour hits, it’s ecstatic. One outstanding scene, in which Arash and the Girl orbit each other sluggishly while a disco ball spins above them, might be the most beautiful shot of the year.

And here we circle back to that point: Amirpour is an aesthetic director, attracted to sight, sound, touch, and feel. Watching A Girl Walks Home Alone at Night is a sensual experience. I think Amirpour is getting at something important by resisting the tendency to consider every book and movie and TV show in terms of how many points it scores politically, socially, and morally. There are reasons we do that, and often they’re good reasons, especially when the art in question courts this kind of thinking. But if I’d made a film as gorgeous and alluring as this one, I’d resist it being reduced to a talking point, too. A Girl Walks Home Alone at Night is the coolest movie of the year. All other adjectives might have to get in line.

Of Balls and Short Australian Men: A Nuanced Guide to AC/DC