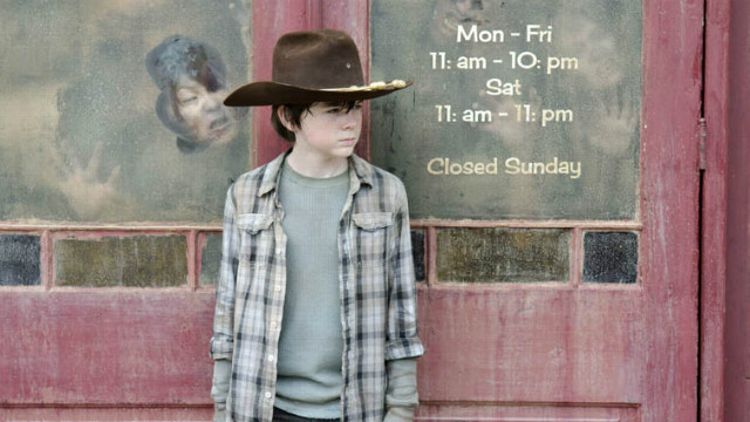 [Note: Finally, my time to shine. A chance to write about the television phenomenon The Walking Dead. It’s truly an honor. Let’s do this.]

We first see our heroes, White Guy, Young White Kid With Cowboy Hat, and Black Lady With Nice Shoulders, cruising down the street in a very fuel-efficient car. They must be headed somewhere in a hurry, because a hitchhiker is begging to be picked up, and they do have an extra seat in the car, but they just blow past him. Pretty rude if you ask me.

I completely understand not picking up this dude. Southern hospitality is one thing, but if someone is carless in suburban Atlanta, they are most certainly up to trouble. Smart move, heroes.

Spotting a pretty bad multi-car pileup in the distance, Black Lady With Nice Shoulders pulls over and, of course, gets stuck in the mud (classic Walking Dead).

WAIT, WHY ARE ALL THESE PEOPLE DEAD?

This isn’t good. Also, there’s a dead-looking, still-living person-zombie under an overturned tractor-trailer. This most certainly can’t be good.

After a few minutes on the road’s shoulder, with a scene revolving around a conversation between White Guy and Young White Kid With Cowboy Hat (who from here on out will be referred to as “Carl”) discussing whether or not they trust Black Lady With Nice Shoulders, they get the car unstuck. And as the hitchhiker from earlier finds them and pleads for a ride, they hop in the car and prepare to leave.

Guy’s probably harmless and simply trying to get to the airport, but again, I respect their decision to ignore him.

Before they take off, however, zombies attack the car. Interestingly enough, no one in the car is screaming, an instinct I clearly do not understand, because I was screaming and I wasn’t even in the car.

White Guy (Rick, but from here on out he will be referred to as “Carl’s White Dad”) calmly rolls down his window and shoots a zombie in the head.

[Note: When the only television show you watch is Pretty Little Liars, this is very unsettling.]

They finally take off, post zombie massacre, and one can’t help but notice the sexual tension between Carl’s White Dad and Black Lady With Nice Shoulders. I’m into it, but they’re doing it in front of the boy. And I think the boy knows something’s up, too. Seems like a wise kid.

[Note: Isn’t there someone named Tyrese on this show? I hope to learn more about him soon.]

After driving for a while, they park at Carl’s White Dad’s old police station, in the hopes of acquiring weaponry.

Carl’s White Dad, familiar with the streets of his town, suggests they visit old bars and liquor stores, because he knew the owners hid guns behind their counters. So they leave. Before making it to their first zombie bar, however, they stumble on a zombie obstacle course.

This place does not look inviting. Graffiti messages like “Turn Around and Live” fill the place, but for some reason they continue walking. Before making it too far, however:

SNIPER ON THE ROOF. AND I DON’T THINK THIS IS PART OF THE OBSTACLE COURSE.

A shootout begins, with the roof sniper seemingly having the upper hand. When he makes his way down to the ground level, only seconds away from killing Carl’s White Dad, the sniper is shot.

The kid is growing up too fast. First he has to watch his dad be a lovebird in the passenger seat with a woman he doesn’t really care for, and now he’s shooting men who are trying to kill his dad. And I thought my sixth-grade slow dance–turned–“my body’s changing” debacle was traumatic.

With the crisis seemingly averted, Carl’s White Dad takes off the sniper’s mask and uncovers a man from his past.

You remember Morgan, our old friend who had to kill his zombie wife because she bit their non-zombie son. Well, here he is, potentially dead, after trying to kill our entire protagonist triumvirate.

They take his body into his house, with Carl’s White Dad telling the other two to “keep an eye out for booby traps.”

You have to respect a good booby trap, even if you are in the middle of being victimized by them. And these most certainly are good booby traps. One is a welcome mat that sits over a hole in the ground, and another is a trip wire that, if touched, releases an ax pendulum that most certainly would result in your body being sliced in half. Actually, the only thing more impressive than a good booby trap is the act of setting up a good booby trap and living to tell your story. There’s no way I could set up that ax death trap without it going poorly for me. And I’m a 6.0 on the NTRP Booby Trap Scale.

Necessary digressions aside, after putting Morgan on a cot, Black Lady With Nice Shoulders (to whom we will refer as “Michonne” from here on out) wants to collect as many supplies as possible and leave, but Carl’s White Dad wants to stay until Morgan wakes up. He states that Morgan saved his life and he feels as if he owes it to him, even though Morgan tried to kill him about 10 minutes earlier.

While Carl’s White Dad waits, Carl gets all “I hate you, dad, I’m a teenager, you’re not the boss of me” and goes outside to explore. Dad gives in to the son’s newfound hormones and allows it, as long as Michonne goes with. Carl isn’t happy about this. They walk outside, but before they leave the obstacle course area, Michonne kills a zombie with her katana.

It’s mind-blowing how they are barely fazed by zombies anymore. You throw one zombie at me, I’m crying. If I make it to a 750th zombie, guess what? I’m still crying.

Carl, in full rebellion mode, tries to ditch Michonne, but she doesn’t fall for it. He thinks he’s a man and all because he has that surprisingly deep voice and a gun, but Michonne’s not having it. She takes her role as zombie -apocalypse chaperone seriously.

Back at Morgan’s house, and while Carl’s White Dad snoops around, Morgan’s hand begins to move and he reaches for a knife under the bed. Carl’s White Dad may be excited for Morgan to wake up so they can reminisce, but Morgan’s intent on less chat, more murder. After a few moments, a scuffle begins, with Carl’s White Dad pleading “You saved my life, Morgan. You know me.”

“I don’t know anyone anymore.”

Morgan’s officially gone crazy. One of his reasons for wanting to kill Carl’s White Dad: He might be “WEARING A DEAD MAN’S FACE.”

I can’t live in a world where people I interact with are wearing dead people’s faces. That’s just not something I need rattling around in my paranoid brain as a possibility. Another reason Morgan’s angry: Carl’s White Dad (from here on out referred to as “Rick”) didn’t respond on the walkie-talkie like they agreed.

Rick screened Morgan’s calls, and now Morgan’s out for blood. If this was grounds for murder, I’d get shot 17 times a day. For me, this might be a bigger deal than zombies and booby traps. Call screening. I wouldn’t do well in this world.

[Note: What are these commercials for Talking Dead? And why is Aisha Tyler involved? Also, did they really show this same episode a few days later, but in black-and-white? Really? Also, there’s a real-life Tough Mudder–like Walking Dead obstacle course event? What is this show? Who are you people?]

Back to Carl, who is trying to break into a zombie-filled room with the hopes of obtaining a family picture. The plan: distract the hungry zombies by rolling rats into the room on skateboards and then grabbing the picture and leaving. The plan seems to work at first, until a rogue zombie grabs Carl’s leg, but thankfully katana chaperone Michonne is there to stab the zombie through the forehead.

After running into a crew of zombies, slicing and shooting them up, and then ACCIDENTALLY LEAVING THE PICTURE IN THE ROOM, Carl’s once-foe, now-friend Michonne goes back in and not only retrieves the picture, but grabs a hideous piece of art for herself.

Friendships are forming, which is great, considering she’s probably going to be his katana zombie stepmom one day.

Back at the house, Morgan and Rick are still having an emotional chat. Rick wants Morgan to come with, but Morgan’s lost it and warns Rick that he will die, as will his son. The dialogue:

Morgan: Is your son dead?
Rick: No.
Morgan: He will be.

While probably right, you can’t say that about this man’s kid, even if you are distraught because you lost your son. Super rude.

After one final attempt to sway Morgan, Rick leaves and takes guns with him. Back outside, Rick runs into BFFs Michonne and Carl, who return with a crib. As they leave, Carl turns to cray Morgan and apologizes for shooting him. Morgan replies by telling Carl never to apologize, and then goes back to tending to his zombie pets that have fallen victim to one of his booby traps.

Seriously, the booby traps are incredible.

They get in the car and leave the Elephant Graveyard. Upon hitting the open road, they drive past a dead body. It’s the hitchhiker. R.I.P. to him, but he should know better than to be walking around the worst urban sprawl this side of Prague. And, in an ironic twist, now that he’s dead, they finally stop for him.

To take his gear, and then keep moving.