The True Blood Finale: ‘Save Yourself’ 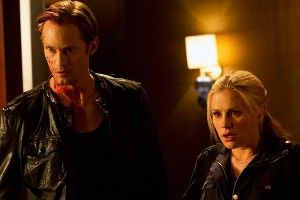 The fairy squad lays the whammy on Russell Edgington from their Pleasure Island funhouse goblin-mouth portal. He mocks their inefficacy until Eric puts him in a headlock, at which point his face melts off like the Nazi’s in Raiders of the Lost Ark. Russell bursts all over Eric’s torso, giving him a contact body high.

Nora picks up Sookie’s scent and tries to make fourthmeal out of her, but Eric intercepts her just in time to relay exposition about his deal with Sookie (minus a few key details about staircase sex). She kneels by Jason’s body, where Jason’s sudden battle-induced dementia makes him hallucinate that Sookie is their mother. Bill types on his MacBook Air in the Authority’s rumpus room. He uses the vampire Wi-Fi (Vi-Fi) as a naked and gagged Sam Merlotte is dragged in. (True Blood, as always, writes its own fanfic.) Bill is stoked for “breakfast,” but what would Sam Merlotte even taste like? If shifters can be any animal, do they taste like every animal at once? Is human even their natural state? Why would you be a human if you could turn into a bear all the time? Am I thinking about this too much?

Sam morphs into a pesky fly, because everyone knows vampires hate flies! JK, he flies into the ventilation. Why not turn into a garlic fly, or a wooden stakelope? Eric and Nora survey Fangtasia after everyone’s gone home. The clurb is eerily quiet, and Pam is nowhere to be found. They locate Tara, shovel all the money hidden in the club basement’s walls into a duffel bag, and split. At the Stackhouse house (house), Sookie and Jason are doing a tiny living room production of The Glass Menagerie in which Jason keeps seeing their parents’ ghosts. The vampires on the run try to round up the Stackhouse sibs for their cozy catastrophe. Eric guilts Sookie into risking her life for the billionth time while Tara salts her with some extra shame about Pam. Jason wants to talk sense into his sister, but she reminds him that Jessica is also captive. Jason cocks his head the way you do when you’re talking to a ghost no one else can see. He nods when his ghost dad suggests he kill all the vamps at The Authority. “What did you put in this marinade?”

Big Dick Werewolf Richie and T-1000 dance around their daddy issues with beer and a BBQ. T-1000 promises to be a decent father and B.D.W.R. makes it clear that he has heard this song a million times before. Mama Wolf pulls up with a convulsing Rikki in the backseat, the result of a V overdose, and T-1000 stabs a needle full of adrenaline into her heart.

Jason stocks up on military goods while pacifist fairy-hippie Sookie tries talking him down. He warns that blood is on the menu tonight and Sook’s vampire ex-boyfriends are certainly fair game. Rikki shivers, naked and covered in blood. This is confusing because Lilith is already the naked-and-covered-in-blood character. I guess everyone on True Blood ends up naked and covered in blood. Cajun Margaritas are made with hot sauce and go go juice

As she’s being treated, Rikki yells at B.D.W.R. for skipping town and going incommunicado right after they went all the way. Lafayette makes ‘Cajun Margaritas’ for Arlene and Holly while “Dazz” plays in the background. They dance around like Practical Magic. Frank Sobotka buzzkills the party by arriving with the fairy he knocked up, who likes her margaritas all salt.

The fairy jumps up and says that her “light broke” [groan]. Jason and Sookie carpool to The Authority with their mom and dad’s haints. Jason takes inventory of his failed relationships and decides that the Stackhouses have spent their lives acting entitled to sex and love they didn’t necessarily earn or deserve. He retrofits his philosophy with more pessimism. A head pops over the hood of the car and orders them to pull over. The fairy gives orgasmic birth on a pool table while Khloe and Kourtney Kardashian watch in horror and take notes. Holly serves as midwife for the fairy’s 73rd birth while Lafayette extols the virtues of going for “the weird shit.” The fairy whistles like a teakettle until a cute baby pops out into her hands. Everyone agrees that nobody has a clue what is up anymore as the fairy gears up to expel yet another child.

Steve Newlin leashes his person-puppy, while secretary Chelsea asks too many questions about the evolution of his brand. He makes off like a creeper with the pup, forgetting that the whole compound is on lockdown. Sharon Osbourne berates Steve for his careless frat drain sesh. Sam Merlotte stays (a) fly to observe the Authority’s administration unraveling. “Who says I only work in smaller doses?”

The regulars at Merlotte’s celebrate the arrival of human life with more Cajun Margaritas. Frank Sobotka is now stuck with four babies to take care of, in a plotline that I cannot possibly see getting more interesting in the future. T-1000 and B.D.W.R. take on their old pack during a vampire lynching and depose the crooked commander-in-chief. The pack members bow down to their new leader, B.D.W.R., as he orders them to stop doing V and adhere to a non-nihilistic moral code.

Eric and Nora try to sneak back into The Authority and override lockdown with Tara and the Stackhouse kids in the trunk seat. They get clearance from Bill, who now does all his business from bed. Steve Newlin chokes on his own blood live on TV, and then turns into Luna just long enough to tell the world about the coming vampire insurgency. Sam Merlotte winds up naked and covered in blood. “This is so very awkward.”

Tara hacks the Authority’s security cameras just as Salome is getting ready to drink the vial of Lilith’s blood herself. The Scooby Gang alternates between gun violence and vampire sneak attacks to get the job done. Now that it’s blood-spattered, I know what the set of The Authority, with its columns and hallways, reminds me of: Doom!

Tara and Sookie orchestrate a vampire women in prison film while Jason plays commando in a pair of yellow Oakleys. Pam and Tara celebrate their reunion with a full-on makeout. Sookie and Jessica choose not to lock tongues. Salome gets ready to greet Lilith in a white dress, clutching the vial of her blood like it’s a teddy bear. She questions Bill’s testimony and chugs the shot of blood. Jason stops playing vampire paintball long enough to reject Jessica’s love and swear off vampires forever. The gang rides up to the penthouse, but Sookie and Eric depart for a special ops mission to talk down the power-mad Bill. Salome vomits blood all over her beautiful Persian carpet while Bill gives a villainous speech about taking advantage of Salome’s bloodlust by spiking the blood with silver.

Bill plunges a stake into her heart, splattering Salome all over the rug. Sookie and Eric try an intervention on Bill. Bill claims his nice-guy persona was all an act, while no mention is made of Eric’s conversion to full-time good guy this season. He tactlessly tells Sookie that her fairy pussy may be good, but it’s not that good.

“I knew I shouldn’t have worn white pants.”

Way down in the hole, Bill licks the shot and throws up everywhere, melting into goo. Eric comforts Sookie, but hark, what light is breaking now? It is Bill, forming Alex Mack–like out of the red blood cells. He roars and Eric grabs Sookie to make a break. We leave this season without a clear take on Warlow, the fairy-slaughtering presumed future big bad, or a final chase scene through the Authority’s labyrinth.

Jason is a ghost whisperer. Sookie is single. Tara and Pam share a sense of humor and now swap spit. Eric is toothless. Jessica seems lost. Frank Sobotka will have to juggle quadruplets and crime. Steve Newlin’s still bopping around someplace, so fresh-faced frat boys ought to beware. The werewolf father-son plot seems the most promising, but it barely relates to True Blood‘s principals. How will Bill’s war games play out now that he’s a god? Will Sookie start racking up suitors again next year, or has she lost her touch? Was Luna’s death a cat scare or did she really bite the dust? Is Jason going crazy? Will the werewolves take on the vampires with the help of the fairies? Can you believe I keep this information in my brain? Until next season, trampires. Be the world you want to see in the change.

NBC's The New Normal Already Getting Banned in Utah