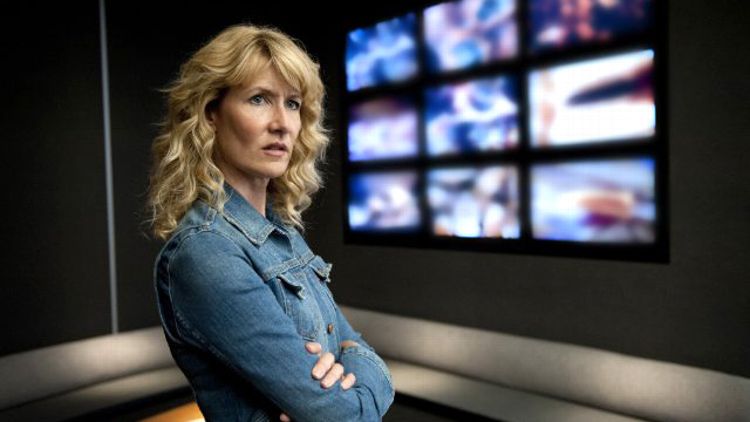 [Edited to add: Spoilers of last night’s season finale ahead — proceed with caution.]

Here are some reasons you might not have watched Enlightened:

1. The word “Enlightened,” which brings to mind health food store bulletin boards and white Buddhists, and we all know that nothing’s less funny than yogis trying to be funny.

2. Laura Dern’s mantra-like voice-overs, which bookend nearly every episode and would not necessarily win you over if you were already suspicious of the word “Enlightened.”

3. No indication that said voice-overs are supposed to be ironic.

It’s a shame, now that the show’s second-season (and likely series) finale has aired, that a huge majority of the viewing public may never realize that Enlightened never really believed in enlightenment — at least not as some kind of strict plane of consciousness that seems so at odds with the Sunday-night couch-and-beer routine. After all, we don’t like to be taught to during prime time, and that’s what it seemed like Amy Jellicoe (Dern) — and by extension, show creator and costar Mike White — were out to do from the first moment she marched into Abaddon in that manic yellow sundress. Of course we’d bristle at her indefatigably cheery disposition in the time slot where we expect to wind down among sex vampires and killer smoke babies.

Maybe it seemed like that was supposed to be the joke at first. Enlightened was officially billed as a comedy, and the initial comic conceit was a sort of fish-back-in-water tale, about how Amy’s new Hawaiian-rehab-inspired values clash with her old, toxic environment. She’s a busybody with delusions of grandeur, like David Brent with a yoga mat. But Enlightened isn’t cynical like The Office, and never ruled out the possibility that there may be something to Amy’s crusading, as poorly executed as it often was. That lack of cynicism threw a lot of newcomers — comedy generally doesn’t allow for the starry-eyed idealist to be right all along; drama generally doesn’t allow for the starry-eyed idealist to be only halfway right. No wonder this show was so hard to describe.

4. Nobody but TV critics talks about it on Twitter, which may seem to indicate that it has nothing relevant to say to anyone with a Twitter account.

5. Your mom, who probably doesn’t have Twitter, likes it.

The uncertainty of Enlightened‘s future is worrisome not only for fans of the show, but for any citizen of the Internet who likes to believe that advancements in social technology mean that their collective voices are being used for a greater good. Enlightened is a show that could only ever have existed on HBO (more of a pacing and lack-of-genre issue than a boobs-and-swears one), but might have flourished more on HBO before the critical reaction to pop culture started to take on the tempo of social media. This is not to say that Enlightened wouldn’t still be the same weird little half-hour in 2001, or that it would be any easier to get used to its alternately awkward and contemplative tone — it’s very likely that its ratings would be just as terrible if it was time slot neighbors with Sex and the City (just imagining the whiplash makes my neck hurt). But maybe viewers wouldn’t feel like something was missing from the show just because they couldn’t encapsulate how they felt about it within five minutes of its closing credits.

Enlightened isn’t built to be buzzed about, particularly not in the way we buzz about things in 2013 — that much is clear from its opening title card each week, as Mark Mothersbaugh’s tranquil score floats in over a clean white screen. Though it is/was among the most smartly plotted shows on TV, its storytelling rhythm worked in waves rather than peaks and valleys — even at Amy’s lowest points, like her meltdown this season after the man she thought was her boyfriend decides to pump the brakes, the show watches her from a place of serenity, understanding her pain but also subtly telling us that this is all happening for a reason. By resisting traditional dramatic indicators, the show works the brain before it works the heart (though when it does work the heart, look out). It deals in complexities of character and motivation that defy a quick, succinct reaction; when an episode ends you don’t necessarily want to talk about it with your friends, because the show has already said everything there is to say so gracefully — be it about mother-daughter relationships, loneliness, or Amy’s (and inevitably our own) often misplaced vigilantism. Even its most surprising plot twists would be both under- and over-served by an “OMG.”

8. People spend more time getting sober than getting fucked up.

This is a show that deals with some deeply tangled moral ambiguity, but not the kind that manifests in excessive vice. Rather, it’s the opposite: While many current shows focus on morally corrupt heroes who show flickers of humanity (i.e., virtue) at key moments, Enlightened is about a woman whose central goal is to do good, and who shows flickers of humanity (i.e., flaws) at key moments. This isn’t the only recent show that has worked with characters like this (Friday Night Lights comes to mind, and Arrested Development’s well-intentioned Michael Bluth is probably the closest thing to a forebear that Amy has), but it’s one of the only ones that has used those traits as its main through line. The culture clash I imagined from a SATC–Enlightened double bill really isn’t that much more severe than this season’s Girls–Enlightened double bill; after a half-hour in Brooklyn it can be jarring to be plopped down in sunny Riverside with a woman who is striving toward altruism and thinking about a world beyond her own social circle (even if it often stems from the same anxiety about status and self-identity that Hannah Horvath & Co. wrestle with).

So we kind of already knew Amy’s final showdown with Abaddon CEO Charles Szidon was coming, because even though it never shies away from exposing her shortcomings, Enlightened was never out to cut her down. It was deeply satisfying to see her in that boardroom, articulating herself calmly and perfectly for once, at the final boss fight with a full health bar and all the ammo she needed. The scene was a cathartic reward for those of us who have followed Amy’s struggles these two seasons and have just wanted her ideals and her methods to sync up correctly. Perhaps it would have taken us longer to arrive at that scene if Enlightened’s third season was a lock, but we would have gotten there eventually, and it was nice to know that White had had that lovely gift up his sleeve all along, that he never stopped believing in Amy.

We don’t see the fallout from Amy’s exposé of Abaddon, but we see the look on her mother’s face when she opens up the L.A. Times, and that’s all we really need. She may be out of a job, and she may not have Dermot Mulroney and his charity dinners and exposed brick walls and record collection, but she did what she thought was right and earned back the faith of people she’d disappointed. That’s a pretty damn happy ending, and if you didn’t happen to see it last night, there’s probably a good reason why.

10. We don’t ultimately feel like we deserve to see good people win.

The Kardashiad, Week 6: Dying Is No Bueno