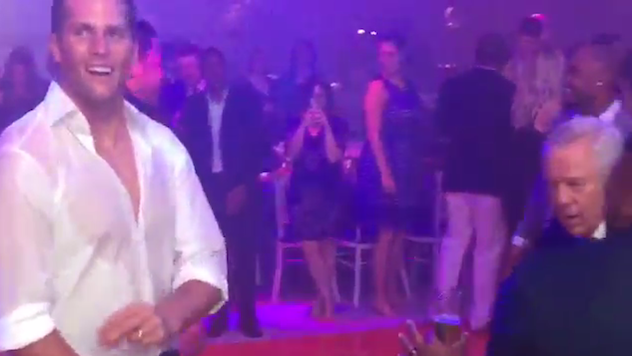 Before I fell asleep last night, a link made its way onto my phone, as links so often do. It was allegedly a video of Tom Brady dancing. It was accompanied by a blog post from the island of Great Britain’s Daily Mail, with the following lines:

“But one place Tom Brady seemingly doesn’t succeed is the dance floor.”

” … the American football player embarrassingly moved and grooved with his teammates to some of today’s biggest hip-hop hits.”

It didn’t look good for Tom, so I fell asleep. Two hours later, I woke up in a panic. Cold sweat. What did Tom do? I had to see. So I reopened the link and actually watched the video.

I have never been so proud of Tom Brady in my life. These cruel attacks on Touchdown Tom — a man who up until this point I haven’t had a single reason to defend — could not be more off base. They’re slanderous — and, frankly, fueled by jealousy. Because Tom was GETTING IT, in a way most people ACTIVELY ARE NOT GETTING IT. As in, that’s not Tom’s first time listening to Migos and Fetty Wap at a party. As in, everybody hating, we just call them fans though, xoxo love Brady Wap.

Here’s what the Daily Mail should have said, were it written by someone who has ever been invited to a social event that specializes in goonery:

“But one place Tom Brady seemingly cannot fail is the dance floor #GIMMETHELOOT.”

“The American football player embarrassed anyone else who has ever been in the middle of a dance circle and got lit with his teammates to some of today’s biggest hip-hop hits.”

“Tom bounced on the dance floor, telling people, ‘Now I run the game got the whole world talkin’, King Kunta, everybody wanna cut the legs off him, Kunta. Brady Wap taking no losses, oh yeah.’“

If you listen closely, there’s one point during Migos’ hymn “Handsome and Wealthy” when someone excitedly yells “fucking Tom.” And it’s not “Ugh, Tom is here.” It’s “GET IT TOMMMMMMMMM.” That’s exactly my take — Tom is out here living his best life, like DiCaprio at Coachella or Diddy at Burning Man. His bop is phenomenal. He knows what to do with his hands, and more specifically, what to do with a few of his fingers. He’s behaving the way any competent human does when Migos blares in a public place. 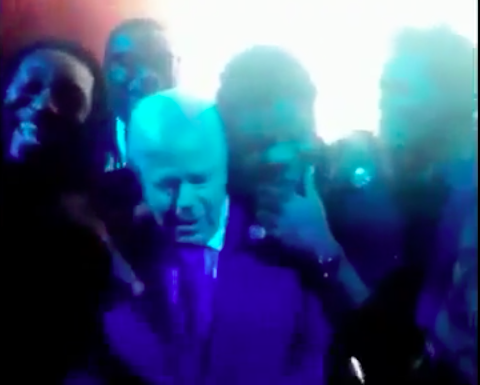 The scientific term for what Kraft is doing, as Drake’s “6 Man” plays at the gala event, is “mobbing.” And if you can’t recognize and respect that, maybe you need to reevaluate the way you historically behave at Super Bowl ring ceremonies.

This time yesterday, I couldn’t imagine a world in which Fetty Wap would be the soundtrack to a dance floor containing Brady, Gronk, and Kraft. But, as we know from that book about that kid Colton Burpo, who maybe made up all this stuff about going to heaven but they still made a movie about it starring Greg Kinnear, heaven is for real.