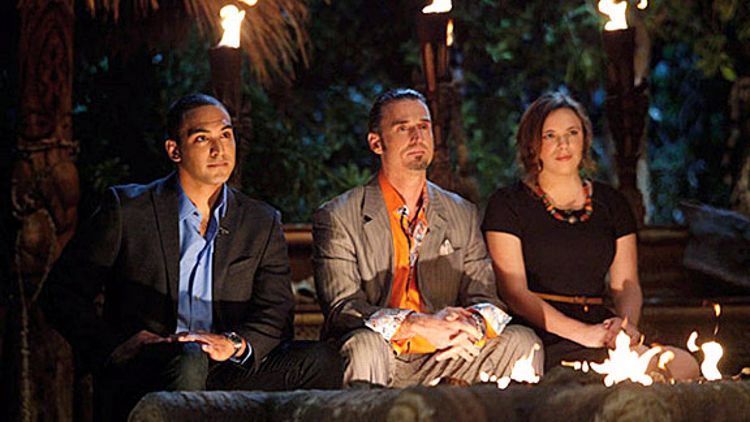 Survivor: South Pacific, the 23rd season of a show that never seems to get less interesting, was one of my favorites. Not only because of allegiance-switching John Cochran, the Harvard Law superfan and relative indoor kid on a ropes course. And not only because of the weird veterans, Oscar “Ozzy” Lusth and Benjamin “Coach” Wade, and their (respectively) oddly commanding yoga routines and mystical ability to breathe underwater. This season was good in an East of Eden kind of way: Brandon Hantz, nephew of Season 19 villain Russell, roamed the beaches during each episode in the clutches of moral desperation and internal struggle, his “Loco” neck tattoo at odds with his heavenly ordained responsibility to be a kind of Survivor holy man. People banded together in prayer and then sat on fallen tree trunks strategizing against each other. As is generally the case, there was an emphasis placed on playing the game sincerely, even emotionally, but the winner was not the person who played the best. It usually isn’t.

As Ozzy defeated Brandon in the final Redemption Island challenge for reentry into the game — like all of the other contestants he’d slain to remain in his tree — it became clear that the only worthy winner would be Ozzy, and so it also became clear that that outcome would be extremely unlikely.

Last night’s first immunity challenge consisted of keeping a seesaw, weighted on one end, balanced while at the same time building a house of cards on the other end. Medical student Sophie Clarke — who had done her best to blend in with the sand, cleverly doing as little as possible to call attention to herself around camp while frequently dominating in challenges — slipped up in her card-stacking concentrated frenzy and tried to boss dating coach Albert Destrade into picking up her cards for her because he was so behind and she had a lot to prove. (Probst congratulated her on an early lead, and she responded, “I have a book” on building houses of cards. That jinxed her but good.) That exposed a crack to Ozzy, who later tried to sway Albert in his favor by recalling the whole thing. Reminding someone of a time when they got bossed is a great strategy, and I think it almost worked, but the Upolu allegiance was too strong a force, and “cowboy” Rick was sent a-packing at tribal council.

For the billionth time this season, the place where Coach sat on the contestant bench was lit on fire with a pair of betrayed eyeballs and angry Wario eyebrows: How could you? Coach had been so skilled at winning the trust of others, what with his dragon-slaying martial arts moves and hand-holding circles. As Savaii used to jaw, he was serving some powerful Kool-Aid. It was Kool-Aid often accompanied by the sugar of the phrase, “I promise you, as a Christian man.” It seems weird that Coach wouldn’t have anticipated the fact that this would backfire once he was Judas to the jury, but hey. It’s hard to scheme that well in a tight ponytail.

Survivor is probably the most physically and mentally grueling game show to ever last more than one season. It’s not a show that gives you any sense that you could do what the contestants are doing: Catching fish and starting fires in the rain seems pretty tricky, but then there are all of those obstacle courses with bags of puzzle pieces at the end, not to mention the biting bugs and constant interpersonal evaluation. It’s not uncommon to see contestants crumble, and at various points this season, Mormon mom Dawn and Brandon and even Sophie — with her warrior’s shoulders and un-stumpable mind — seemed horribly undone by the experience of living on a competitive island and a diet of mushy fruit flesh.

Coach and Ozzy, both on Survivor for the third time, held up much better than the newcomers. Their beards seemed preplanned and they spent a lot of time working on their physiques, which proved to be smart (up to a point). Ozzy’s undoing was his failure to get immunity in the final challenge, the million-dollar psychedelic flower puzzle, following an obstacle course lead that caused his handsome mind too much strain. Sophie gained immunity, and despite Ozzie’s last-ditch scramble to win Coach’s loyalty, he went home skipping and hollering as he took the good-bye steps into darkness. There was applause from the jury, the members of which later said that they would have given Ozzy the win if he’d been in the final three. But of course he wasn’t in the final three. He was too honest, too confident in his physical ability, too obvious a threat, and the last remaining member of Savaii among the original Upolu alliance of Sophie, Coach, and Albert. He won the at-home prize (a hundred thousand bones; Endless Summer, here he comes!), and unlike Cochran (despite Probst’s predictions: still single), probably a million dates.

(Does that motivate people to participate in Survivor? It must: Another pair of contestants from this season are in a relationship, as revealed on the reunion show — Keith and Whitney. “Who are Keith and Whitney?” It doesn’t matter, they’re gone now. The tall one and the blonde one who called Sophie names during the juror confrontation. They spent most of their time on the island in a hammock together, schnookling and thinking about money and being young on a beach. That’s cool.)

Before Ozzy was voted out, he — uncharacteristically, unless you count the time he said Cochran played the game “like a wiener” — attacked Sophie on a number of levels, most cruelly calling her spoiled and a brat. She cried (with hiccups) and I wondered if Ozzy had attempted to tear her down just to make her look weak in front of the jury in order to secure Coach’s position as winner. When you consider Sophie’s game play over the course of the season, she actually had “outlast” and “outplay” on lock, floating just under the radar and never trumpeting her own agility, which was pretty impressive. She always held her own in challenges, but her failure to “outwit” in the traditional sense (by forming friendships that could later be deftly manipulated) actually seemed to work in her favor. Albert never seemed threatening, probably because his desperation often saturated his political moves and made him appear “sleazy” (via blonde Whitney); Coach had outwit down too well, and earned too many cranky enemies. Sophie wasn’t the obvious choice for the winner — she was sometimes uncharming, rarely smiled, and occasionally looked like a Berserker — but something in her defense of her personality after it had been shredded by Ozzy struck a chord. She explained that she had been a Girl Scout and had learned to be confident in herself, and that perhaps that had deterred people from connecting with her. She said that she knew that the most loyal alliance on Survivor was often between a man and two young women, who would support him until the end, and that she had wished she were a man so that she could adopt that strategy. She compared Coach to a little girl whose loyalty would carry her to the finals, and clearly there was something to that: Coach had underestimated her, and she meticulously adapted to situations while never trumpeting the power she knew she contained.

Ozzy and Coach were the stars of the season, the athlete and the guru, but it’s always best to be the guy behind the guy. Sophie was smart, and she wanted the glory more than the fame: She was content to be the chameleon, never really revealing much of herself, and certainly not after remodeling her character, as the veterans did. She was focused, confident, wily, and great at puzzles. I don’t think her win is such a surprise, though it’s not glamorous. That’s the fun of Survivor, anyway: It’s an intricate social structure that even 11-season-student Cochran or iron-bodied warhorse Ozzy can’t crack. It’s always anyone’s game. Sophie won with five votes, Coach having only three.

Previously: The American Cooking Show Boom: Why We Watch
After the Suicide: Understanding The Real Housewives of Beverly Hills
The X Factor: Chris Rene Steps In It

The Dark Knight Rises Trailer: Anne Hathaway is the 99%