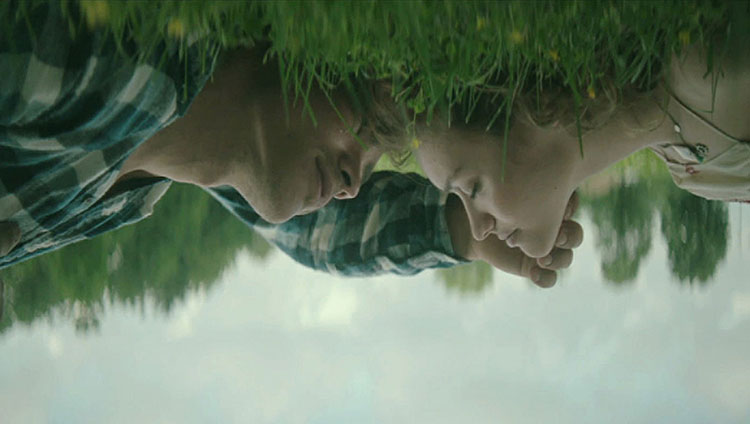 There’s a scene in The Signal in which a scientist for an unnamed government agency places three shapes in front of a young man: a yellow pyramid, a blue square, and a green sphere. The scientist wants the subject to match the shapes to numbers and words written on tiles. It’s some kind of intelligence test, or maybe some kind of psychological profile. The young man doesn’t want to do it.

So he changes the subject. There’s a broken clock a few hallways back from the interrogation room. The scientist asks which hallway, and the young man responds with a flurry of directions. Seven windows back, left turn, four windows, right turn, two windows down next to the bathroom next to the sign that’s upside down. The scientist assures him that he’ll look into it. Now, the test.

The young man refuses again. “Screw this. This is stupid.” The scientist needles the kid’s pride. Maybe the test is too difficult. The kid assures the scientist that he merely chooses not take the test. But then it begins to spill out. The tile that says zero corresponds to the cube; five goes with the pyramid. Before you can even wonder what the connections are, he’s on to the objectivity of the spectral quality of light and the subjectivity of written words. It’s Good Will Hunting but in a top-secret government facility.

The Signal is a movie that never quite transcends its influences. And that’s OK — it’s partly what’s interesting about it.

How many flawed sci-fi movies are worth your attention? I can’t think of many, but this is one. It’s a movie that thrills with its ambition despite not hitting the target. The Signal’s influences are so cool that you appreciate the nod instead of decrying the theft. And the hybrid of genres, while imperfect, is exciting for what it says about the future of sci-fi and about the talents of writer/director William Eubank.

The Signal (which is available to buy on iTunes now and will be available to rent on September 23) opens with three friends from MIT on a road trip to California. Nic (Brenton Thwaites) and Haley (Olivia Cooke) are a couple, though perhaps not for much longer, as Haley is about to spend a year at Caltech. Nic, once an athlete, has recently been diagnosed with muscular dystrophy and now needs crutches to walk. Jonah (Beau Knapp) is Nic’s best friend, smirking and cocky where Nic is withdrawn and unsure.

All three are smart — of course, they go to MIT — but Nic edges into uncommonly brilliant. While overnighting at a roadside motel, Nic gets a taunting text from Nomad, a mysterious hacker who managed to penetrate MIT’s server network. It was a prodigious hack that the MIT administration blamed on Nic and Jonah, resulting in their near expulsion. Nic wakes Jonah and the two begin an email conversation with the hacker.

Though respectful of Nomad’s abilities, the interaction quickly devolves into bluster and threats of exposure. “You better watch your back,” types Nic. Nomad responds by hacking into a laptop on the bed in the other room, streaming the video from its camera to Nic’s computer. The video shows Nic and Jonah with their back to the camera, typing away. While Haley sleeps, the two set up their gear in the bathroom and begin trying to track Nomad’s location. They find him, or his IP address, anyway. Goodsprings, Nevada, conveniently on the way to California.

The opening road-trip scenes plays out like a David Gordon Green coming-of-age movie. Sunlight filtered through a dusty windshield, Haley’s hair fluttering on the air from the open window, bored faces, a wide-open landscape floating past. The monotony and the melancholy of a cross-country journey set to sparse, Album Leaf–sounding piano. The motel counter hack is like a three-minute techno-thriller. Close-ups of cables being clicked into place, fingers on keyboards, lines of code reflected in Jonah’s eyeglasses, Nic’s face lit by the glow of the screen, technical these-dudes-know-what-they’re-doing jargon served and returned with Sorkin-esque pace.

The acting is wonderful throughout. So much so that I was left wishing the three main actors had more screen time together. Thwaites imbues Nic with a core of goodness tinged with sadness, providing the film with its through line. Knapp’s Jonah and Cooke’s Haley just want their friend to feel whole again; their friendship, and especially the relationship between Nic and Haley, established in that wonderfully drawn first 20 minutes, is the engine that propels the movie. So when Jonah and Haley disappear for large stretches, it feels — despite the plot twists and action — like something’s missing.

Eubank moves The Signal deftly, if not entirely cohesively, from genre fragment to genre fragment. Picking out the influences is part of the fun of watching the movie. Stanley Kubrick and David Lynch are two of the obvious, and freely admitted, ones, along with Alex Proyas’s alien-noir Dark City. There are nods to District 9, The Blair Witch Project, Chronicle, Good Will Hunting, and, I would swear, even some Metal Gear Solid and Half-Life. Only 31, (is there a word in German for when a young dude does something really cool, causing you to feel empty and worthless inside?) Eubanks started his career working for Panavision, giving him access to multimillion-dollar film equipment and sending him out to film sets to deliver and set up gear. Prepping cameras gave him an invaluable nuts-and-bolts view of how movies are shot. He made the most of it. “I’d be there secretly drawing where all their lights were,” Eubank told the Los Angeles Times. “I’d see where the actor would stand. The film would come out and I’d compare the shots to my little journals and be like, ‘That’s why that works like that!’”

For his first feature as a writer/director, Love, Eubank built a set depicting the interior of the International Space Station in his parents’ driveway. That film follows an astronaut orbiting Earth after all of humanity has died, and features flashbacks to the Civil War and documentary-style testimonial scenes. Eubank used friends, family, and even his elementary school teacher as actors. He was 26 years old.

With a price tag of only $4 million, The Signal is of a piece with the recent spate of indie sci-fi films like Under the Skin, Upstream Color, and Coherence that largely jettison the Big Ideas of conventional science fiction for creativity, sharp writing, and character-driven points of view.

The Signal differs from those by adding credible summer-movie-style action set pieces to the mix. Gunfights, explosions, superpowers: all on a budget that’s less than the sale price for a three-bedroom apartment in Manhattan.

What’s wonderful about The Signal, then, is less in the movie itself, but in what it represents. Superheroes run the show right now — practically the only bankable property in a steadily shrinking box office. And while I’m not complaining — I over-the-moon loved Guardians of the Galaxy — one would have to be stoned to not wonder what’s next, and what happens if the much-talked-over spandex fatigue eventually does settle in. Maybe Interstellar can answer that question, along with the more complex space-time queries it’s tackling.

What’s next, hopefully, is people like Eubanks. The Signal is flawed, but it’s also a declaration. It’s Eubank’s Pablo Honey,1 an OK film that leaves you feeling that the next one, or perhaps the one after that, is going to be an absolute monster.

‘The Jennie Garth Project’ Is Like All the Other HGTV Shows You Love, But With Less Fun and More Kelly Taylor