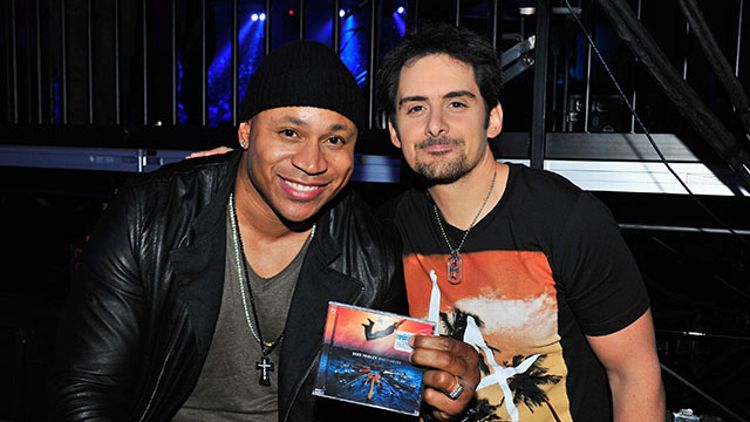 During my stay in Austin for South by Southwest, one of my more random encounters was a 10-minute interview with LL Cool J. I had no real reason to talk to him, but the opportunity seemed too interesting to pass up. So we chatted before he hit the stage for his music showcase, sponsored by Doritos. The interview never ran because, quite frankly, I’ve historically had a great deal of love for Cool James. And what transpired in that interview, and the way he tackled questions, just wasn’t the man I was expecting. And, at the end of the day, I simply didn’t feel like clowning him.

I didn’t delete the interview, however. Even though I felt as if I was doing him a favor, I still wanted some of his answers for my own personal enjoyment. Because they were from another planet.

And then this morning, news broke of a collaboration between LL and country singer Brad Paisley. I was not surprised to find out that Brad Paisley was on LL’s new album, Authentic, because when we spoke, the rapper gave me a taste of what type of project this would be:

The catch: The song that was released today was a different Brad Paisley–LL collaboration. Much like Kendrick Lamar’s and Drake’s mutual guest appearances on Take Care and Good Kid, M.A.A.D City respectively, divided by 0, it was now LL’s turn to hop on a Paisley track. While this seems like a strange but wonderfully symbiotic relationship that has developed between the two artists, the end product is the greatest Chappelle’s Show skit that never happened. The problem is that they’re not joking.

While talking to LL, I asked him if he wanted to take the artists he worked with out of their comfort zones. His reply:

“Absolutely. I did that. You know what, it’s just coming from the heart. And with no fear. And being courageous.”

It’s appropriate that the above audio YouTube clip is a lyric video, because this song really is about only one thing. You know, words. And how they have power and stuff.

This almost-six-minute song, while a doozy for the entire ride, only really gets noteworthy at three minutes and 40 seconds. That’s when the post-racial baton is passed from Paisley to Cool J and things get really fantastic.

Dammit, LL. Did you really have to start off with “Dear Mr. White Man”? His name is Brad. He’s right there. Just call him Brad. You’re allowed to. It’s 2013.

“What the world is really like when you’re livin’ in the hood
Just because my pants are saggin’ doesn’t mean I’m up to no good
You should try to get to know me, I really wish you would
Now my chains are gold but I’m still misunderstood”

I’ll let you use this “chains” imagery once, LL, but no more. I beg of you no more.

Just so you’re clear, LL is saying that he wants white people to make money, but would appreciate it if it didn’t come at the expense of his freedom from slavery. It seemed necessary to spell that out, in case it went over your head.

“Feel like a newfangled Django, dodgin’ invisible white hoods
So when I see that white cowboy hat, I’m thinkin’ it’s not all good
I guess we’re both guilty of judgin’ the cover not the book
I’d love to buy you a beer, conversate and clear the air”

I KNOW THAT YOU KNOW IT’S “CONVERSE,” BUT THIS BLATANT GRAMMATICAL MISTAKE ISN’T HELPING YOUR CASE.

So that was LL’s verse. As you can tell from the words, and the song as a whole, the message comes from a good place. A place of understanding. A place of a better tomorrow. It’s the story of a black man and a white man trying to meet in the middle, learn each other’s cultures, and put the past behind them. If anyone appreciates what they’re trying to do, it’s me. Unfortunately for them, and only them, this is the funniest thing I’ve ever heard in a long time. And it gets better.

Paisley: “I’m just a white man”
LL: “If you don’t judge my do rag”
Paisley: “Comin’ to you from the southland”
LL: “I won’t judge your red flag”

I, on the other hand, will judge a 45-year-old, do-rag wearing LL Cool J, without hesitation. Also, while I know this “red flag” LL speaks of is the Confederate Stars and Bars, there’s a small part of me that wishes this whole thing were about the Turkish flag.

Paisley: “Tryin’ to understand what it’s like not to be / I’m proud of where I’m from”
LL: “If you don’t judge my gold chains”

Paisley: “But not everything we’ve done”
LL: “I’ll forget the iron chains”

I told you not to go there. Why don’t you listen?

They’re in full Eddie Murphy–Joe Piscopo, “side by side, you are my amigo, Negro, let’s not fight” mode right now, and they can’t be stopped.

Paisley: “Oh, Dixieland”
LL: “The relationship between the Mason-Dixon needs some fixin'”

LL is one ad lib away from making me racist against black people.

Paisley: “I hope you understand what this is all about”
LL: “Quite frankly I’m a black Yankee but I’ve been thinkin’ about this lately”

Paisley: “I’m a son of the new South”
LL: “The past is the past, you feel me”
Paisley: “And I just want to make things right”
LL: “Let bygones be bygones”

OK, that wasn’t too bad, James.

Paisley: “Where all that’s left is Southern pride” How does the song end? With LL, taking us to the fadeout, in the only way he knows how:

As my interview with LL ended, he had one more, very long thing to tell me:

This song will have its intended purpose, bringing people together, only if people of all races band together to make fun of Brad Paisley and LL Cool J.

That’s how we get to a better tomorrow.

April Book Recommendations: Life After Life, You, and x