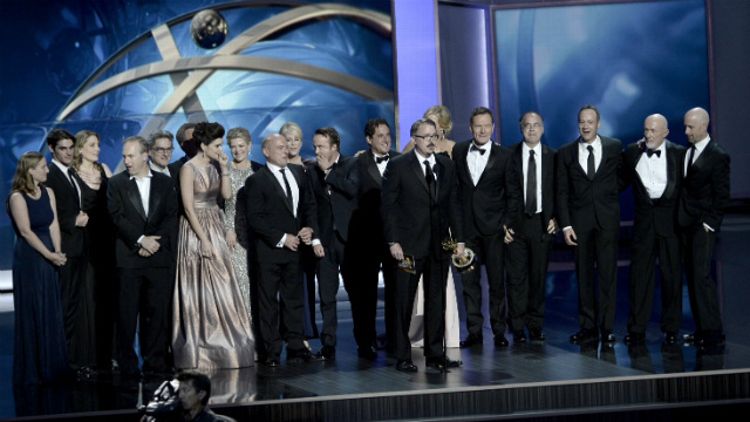 So it happened. It really happened. The Academy of Television Arts and Sciences called AMC’s bluff and went through with its awards ceremony last night despite running against the first, Twitter-spoiler-rife airing of Breaking Bad‘s supersize, penultimate episode, blithely handing out every last one of its statuettes like nothing more important was happening down the programming grid. They did not, as we humbly suggested in a very polite letter addressed to the President of Television, divert the hundreds of limousines carrying the presenters and nominees into the Nokia Theatre parking structure and hold everybody there until Monday night, with full in-car food and beverage service by always-accommodating host Neil Patrick Harris, so that we could have the necessary time to digest the more important show before dealing with the unnecessary distraction of their awards presentation.

But they never answered that letter. And so we, either because we are insane or because we made a cold, hard calculation about how to get through four hours and 15 minutes of total viewing as efficiently as possible, actually watched the Emmys first. Well played, TV Academy. We were weak. We blinked. We hope you feel good about the fact that we waited around to discover who took home your biggest prize before we allowed ourselves to actually watch that very same series demonstrate its current creative dominance. You’re the winners today.

Oh, right: winners. We’re here to talk about the winners. If you require the list of all the Emmy winners, you can find that right here, from your Outstanding Directing for a Comedy Series to your Outstanding Costume Design in a Two-Time Variety Special (if that was a category — maybe it was. It’s hard to be sure; they’re handing stuff out for three hours). Right now we’re more interested in the big winners, the totally unexpected winners. The winners we’re still thinking about this morning, in the moments when we’re able to catch our breath between the post-traumatic heart palpitations Breaking Bad gave us.

Let’s run through them before the shortness of breath kicks in again.

It all seems perfectly sane and logical that Breaking Bad would finally get the Outstanding Drama Series Emmy it deserved; it feels like the only thing that anyone with a television and Internet connection has been talking about for the last five weeks. Any other result would have seemed sacrilegious, with the possible exception of Game of Thrones, which held us in the same stab-happy thrall earlier this year. So when a beshorted Will Ferrell, flanked by his Angry Birdsing kids who seemed only slightly less engaged with the ceremony than the exhausted viewers who’d made it all the way to the end, read the name Breaking Bad, everyone could exhale and get on with their lives. (I.e., dummies like us diving right into their DVR’d copies of last night’s “Granite State” episode.)

The only trick was that we — just like Gilligan admitted up on the podium, trophy in hand — half-expected House of Cards to benefit from the same Academy shiny-new-thing-ism that delivered a Homeland upset last year. Right in the middle of the opening number, there was Kevin Spacey, doing his patented plotting-directly-into-the-camera bit, a snide harbinger of the upsets to come. “It looks like that fool Vince is playing right into my hands,” Spacey might as well have sneered. “David Fincher said we sent Already Evil Mr. Smith to Washington and turned him into puppy-strangling Vice-President Scarface. We can’t lose to that hayseed simp now!”

The lesson is clear: Bet against Vince Gilligan at your own peril. He could win another one of these next year.

How do you like Skyler now, people-who-spent-years-saying-truly-awful-things-about-Skyler-on-the-Internet? Is she still bugging you? Speak a little louder. She can’t hear you, her quote just went up, she’s the Outstanding Supporting Actress in a Drama Series.

That’s four straight Outstanding Comedy Emmys for Family, a third Outstanding Lead Actor in a Comedy Series victory for Parsons, and an infinite amount of wins for the twin forces that eventually come for us all.

For a minute there you thought 30 Rock or Veep might sneak in and take it, right? That’s exactly when Modern Family gets you. And the next thing you know Steve Levitan is up on the podium musing about whether he might need to add an Emmy wing to his house. (He does need that. He has all the Emmys now.)

It’s not often that a first-time winner drops the mic. Actually, what Nurse Jackie‘s Wever did after winning Outstanding Supporting Actress in a Comedy Series was give perhaps the greatest acceptance speech in Emmy history, then hurl the lifeless mic into the audience after she murdered it with her nonchalance. Winner.

… And a thousand “and the student surpasses the master” ledes were written. (Hey, just like that one!) If you wanted true history to be made this year, this was it: Colbert snapped pal/mentor/lead-in Jon Stewart’s 10-year winning streak for Outstanding Variety Series. One could perhaps point to Stewart’s summer hiatus from the Daily Show desk as the reason Emmy voters decided it was time to make a change, but (1) fill-in host John Oliver was excellent throughout his pinch-hitting stint, demonstrating the franchise is viable in the event of Stewart’s departure, and (2) The Colbert Report is great. It was due. Maybe they’ll trade off winning years for a while, just to keep things fresh for everybody.

Also: Colbert’s custom-designed Americone Dream Ben & Jerry’s flavor made a cameo on Breaking Bad last night. Everything’s coming up Stephen Colbert, even when we’re talking about the frozen-dessert options of an enslaved meth cook living in a cold cement hole inside a neo-Nazi compound.

You could go all of Veep here, with Julia Louis-Dreyfus getting the Outstanding Lead Actress in a Comedy statue (her fourth Emmy) to match the Supporting Actor one Hale nabbed moments earlier. But Hale’s the first-timer who wrapped up his own heartfelt litany of thank-yous, got about five minutes to savor it, then immediately wound up back onstage, in character and clutching JLD’s purse while she delivered her own speech. Had he been called upon to support Arrested Development costar Jason Bateman in the event of a win, he would have dutifully chewed off his own hand.

“This was a two-hander,” said Michael Douglas, America’s most prominent survivor of lady-pleasuring cancer, as the camera cut to costar Matt Damon during Douglas’s Outstanding Actor in a Miniseries or Movie acceptance speech for Behind the Candelabra. “You’re only as good as your other hand.”

Aaron Sorkin’s been trying to tell us this for a couple of seasons now: In the end, the news always wins. That’s why he waits two years before he dares confront it; approach it too quickly and without the healthy sense of fear it has earned and the news will gut you, leaving you for dead atop a rundown-strewn anchor desk with your abdomen turned inside out, like it does to Wolf Blitzer three or four times per week.

Sorkin, who lived undetected inside a newsroom for an entire year while developing the show, has seen the carnage firsthand and plotted accordingly. And so Jeff Daniels, his news-whispering mouthpiece, his machine-tooled soliloquy-cannon loaded with enough Truth to knock Rupert Murdoch off the deck of The Left-Wing Conspiracy at a range of 10 nautical miles, disappeared into the night with the Outstanding Lead Actor in a Drama trophy. Meanwhile, Bryan Cranston, Jon Hamm, Kevin Spacey, and Hugh Bonneville were all trying to get the license plate number of the satellite-dish-festooned ACN news van that just hit them.

They didn’t respect the news. They were wasting their time saying a bunch of made-up shit written by cowards and fools. And they went home empty-handed, every last one of them. Indeed, Jon Hamm’s beard is a lantern-cozy made of premium shag carpeting, a face-warmer so impossibly lush the lumberjack union has awarded it a full pension and front-row tickets to the overhand hatchet toss. But as magnificent as it is, it’s not going to change the conversation the way he wants it to. Nobody’s forgetting about his enormous penis just because he decided not to shave for a week.

Nice try, Jon. Try growing one on … wait. You’re not going to like where this is going; we’ll stop right there. It’s not technically a beard if it’s on your enormous penis, anyway.

Was this secretly the biggest upset of the night, eclipsing even the Daniels win? Boardwalk Empire‘s Bobby Cannavale emerged victorious from a ridiculous Best Supporting Actor in a Drama field that included Jonathan “Mike Ehrmantraut” Banks, Aaron Paul, Mandy Patinkin, and Mr. Carson the Butler. His secret: the four kinds of rubber wrenches he used to beat a guy to death on his first day of shooting. It’s a classy craftsman who thanks his tools, even if they wiggled a little bit in his hand as he pretended to turn a man’s skull into a warm fruit salad.

Sometimes all you need to be a real winner is to sneak in through an unattended door, hit the red carpet, and appoint yourself “social media reporter.”

This is how #legends are made.