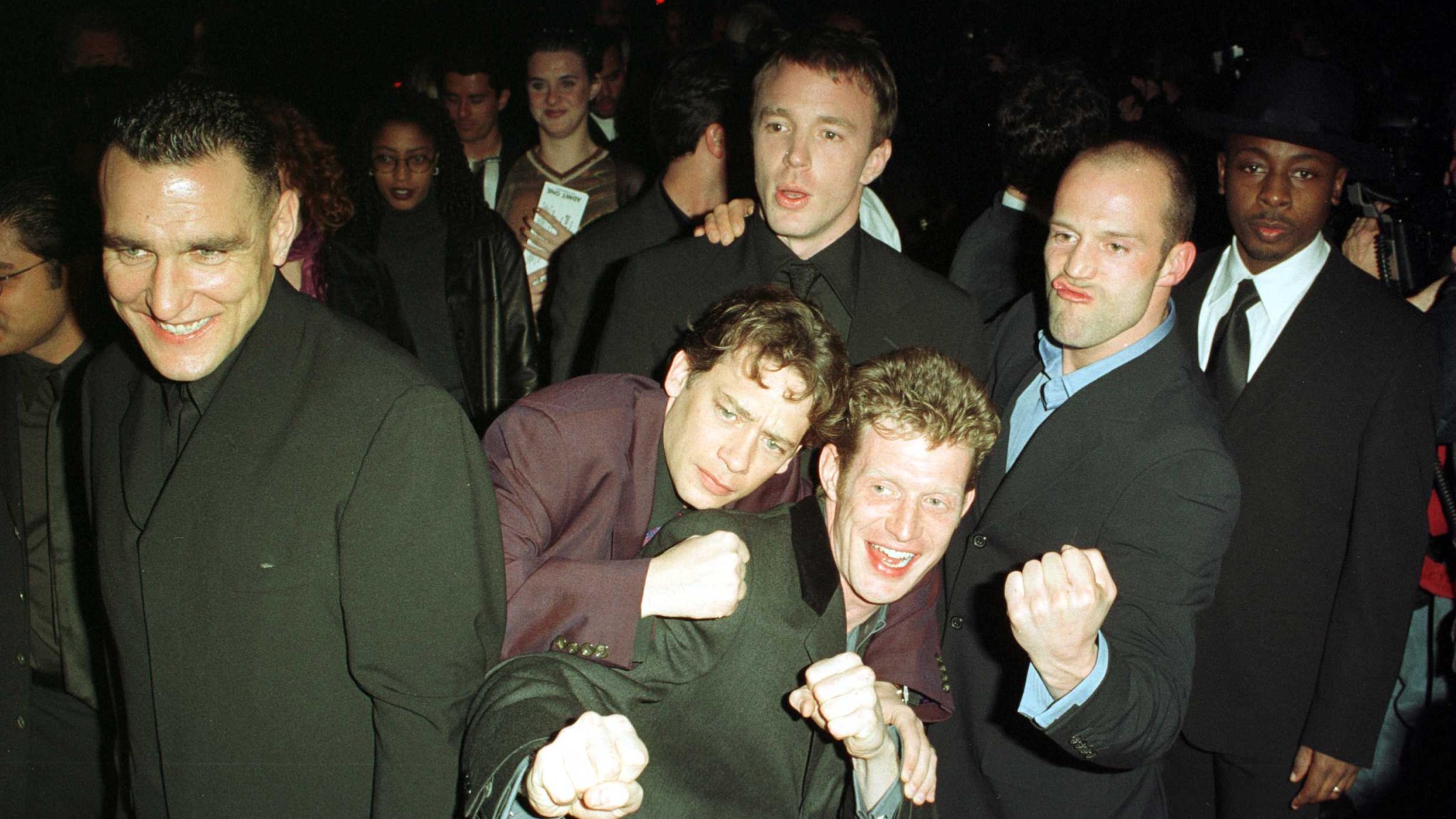 There are two ways to think about Guy Ritchie.

For fans and moviegoers, the first is appealing: It purifies Ritchie of the sins that would make up most of his career. But for Ritchie, certainly the second is preferable, because these are the movies Ritchie’s making. This weekend, The Man From U.N.C.L.E., a film that seems produced for no single living human being, comes out in theaters. Its release prompts some questions: Why is Guy Ritchie making movies like this? And was it Hollywood that did this to him, or did he do it to himself?

After a decade and a half of simmering in the popular culture, it’s easy to dismiss Lock, Stock and Two Smoking Barrels and Snatch, both of which Ritchie wrote and directed. Call it “the Dorm Effect,” a phenomenon that has colored the legacy of films like Fight Club, The Big Lebowski, Scarface, and Pulp Fiction. The Dorm Effect is an equation. If x = the number of college dorm rooms with a movie’s poster on their wall, and y = the popular conception of that movie among adults who have graduated from college, then x is inversely related to y. 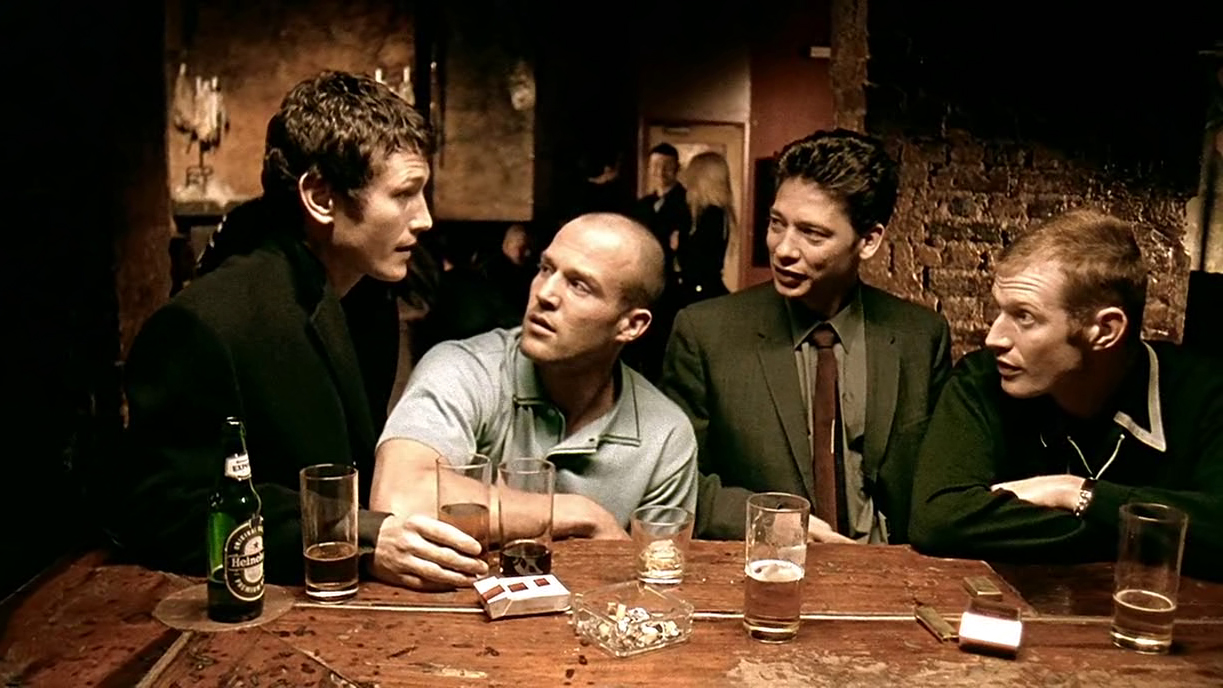 Posters for Lock, Stock and Two Smoking Barrels and Snatch are on a lot of dorm-room walls, and you can understand why. Both films are flashy, kinetic, and stylized to the point of kitsch; they feature well-known actors and video-game violence, loud music and louder gunfights. They have plots that are at once more tangled than a box of electrical cords and also, thanks to Ritchie’s penchant for voice-over and exposition, so easy to follow they could be children’s books.

Lock, Stock and Two Smoking Barrels came first. Made for just over a million bucks and released in 1998, the film is weirdly colored yellow, like it was left out too long in the sun. That fried quality seems to enhance Ritchie’s style, which he is just beginning to articulate here. Ritchie favors what you might call directorial intervention; he never lets you forget that he’s there, whether that’s through slow motion, voice-over meta-commentary, or still photographs used to accent the heightened sensations of a drunken night or a frenzied fight. He likes to twist and tweak the action so that it warps. Lock, Stock is about (in no particular order): a debt, a drug heist, two shotguns, and the fates of a handful of different individual criminal enterprises.

Make no mistake: These are not realistic movies. Ritchie’s version of crime in England is a fantasy, filled with double-crosses, coincidences, accidents, and tricks of fate. Criminals are constantly and unknowingly trying to pay debts with money they stole from the men they’re trying to pay. There are no women, and there are no cops; there are just hoods engaged in one-upping each other, climbing an invisible ladder.

Of course, success breeds ambition, or at least the desire for more success, and it’s startling to see how fast Ritchie left the rails. There are two things that happened, post-Snatch, that acted as catalysts for the way Ritchie’s career swerved. He was successful — no longer an underdog cinematic street poet. The other? He married Madonna. 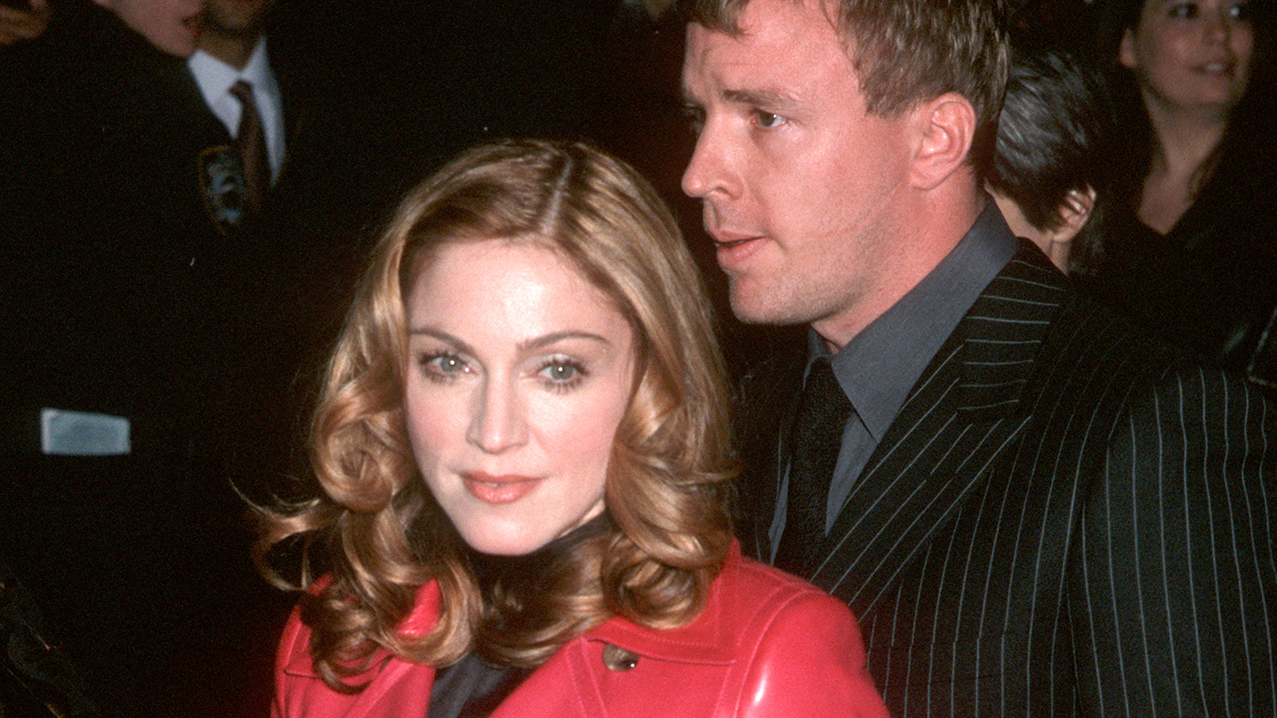 Ritchie and Madonna wed in 2000, the same year that Snatch came out, making him the only filmmaker whose career can be read in terms of how it changed after he married Madonna. Were every filmmaker to have married Madonna at some point in their careers — Orson Welles, Spike Lee, Paul Thomas Anderson — the movie industry would look very different, but unfortunately, this is a form of exegesis we can only apply to one director.

After marrying Madonna, Ritchie made a movie with her, 2002’s Swept Away. It’s a romantic comedy in which “a spoiled rich woman goes on a yachting holiday with friends in the Mediterranean and gets entangled in an unlikely romance with a communist sailor.” Madonna plays the spoiled rich woman. Does that sound appealing to you? You must be Madonna. Swept Away has a 5 percent rating on Rotten Tomatoes. I’m not going to lie to you and pretend I’ve seen Swept Away. Let’s instead turn to A.O. Scott: “Mr. Ritchie lacks both the attention span and the writerly instinct to convey this transformation. On the boat, and then on the island, the director squirms with boredom and throws in a few compensatory gimmicks, as if to remind us how much fun we had at his other pictures.”

As bad as Swept Away was, it was at least something of a deviation, genre-wise. The same excuse cannot be used for Revolver. This 2005 effort was meant to be Ritchie’s evolution into a new type of crime-movie director, one who could infuse his capers with philosophy and metaphor. Deeply influenced by Kabbalah [coughMadonnacough] at the time, he structured Revolver’s narrative to reflect the symbology and meaning of the belief system. Despite returning to the crime-film genre, Revolver abandons all that Ritchie was good at — the energy and wit and humor and dynamic storytelling — in favor of a belabored, completely incoherent attempt at significance.

Revolver marked Ritchie’s creative nadir. To pull himself out, he did the sensible thing: He went back to his roots with 2008’s RocknRolla. You can’t go home again. RocknRolla is a sterilized version of his calling-card films. Despite featuring a strong cast and adequate visuals, RocknRolla is a lifeless movie, boring and slick and glacially slow. It isn’t bad, it just isn’t anything. After watching the onslaught of plot and movement offered by Lock, Stock and Snatch, RocknRolla’s inert first half, in which almost literally nothing happens — people talk; a painting is stolen; Tom Hardy has sex with Gerard Butler — is mind-boggling. It’s mostly notable as a harbinger of what was to come: two Sherlock Holmes movies in which Robert Downey Jr. plays the Great Detective as a more articulate version of Brad Pitt’s character from Snatch. 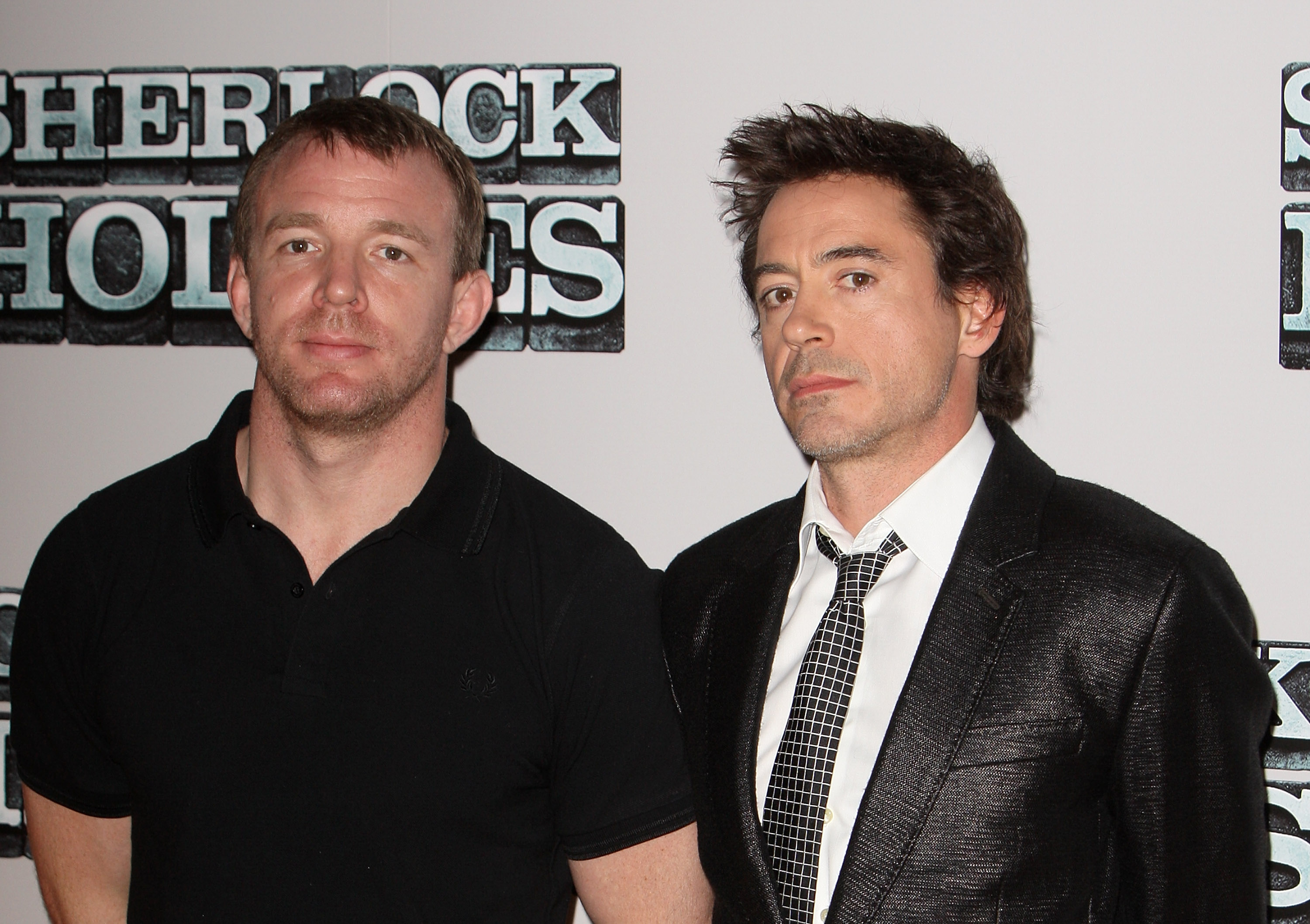 The quality of Ritchie’s movies exists in direct proportion to how British they are. Lock, Stock and Snatch — his second-best and best movies, respectively — are so British that, to an American, they can verge on incomprehensibility. Sometimes, this incomprehensibility becomes literal, as with Pitt’s character in Snatch. But mostly, Ritchie’s weaving local tales, imbued with the kind of color and personality that makes the local special. In Snatch, Dennis Farina’s character calls direct attention to it, insisting that Vinnie Jones’s Bullet-Tooth Tony speak English to him, American English. For the viewer, though, this patois is transportive and convincing. You can accuse early Ritchie of many sins, but you cannot suggest that he’s insincere about a certain type of British parochialism. He’s the cinema bard of the English streets.

And at the time he was making these movies, that type of U.K. revivalism was very much in vogue. From Oasis to Blur to magazines like Dazed and Confused and NME, lad culture and British culture were hegemonic, superior. Let’s reiterate here: Madonna married Guy Ritchie. Pitt got it, too, which is why, right after Fight Club and Se7en, he ends up in Snatch doing character work.

The farther Ritchie got from London, the less his work felt like anything original or interesting. His writing literally sounds worse — less charming and funny and creative and energetic — coming out of American mouths; just check out Ray Liotta in Revolver, or the agonizing combination of Jeremy Piven and Ludacris in Rocknrolla. (The only exception, Farina, is a unique case: He’s on British territory, and he gets to play along, and he’s a terrific actor.) It makes sense, then, that the delocalization of his work matches his play for the mainstream.

With this idea of cultural geography in mind, it makes sense that the best part of Ritchie’s Sherlock Holmes franchise is Robert Downey Jr. playing the British version of an American playing a Brit. The Sherlock Holmes movies marked Ritchie’s formal entry into the kind of blockbuster filmmaking that defines Hollywood right now. They’re action-adventure tentpoles that, like the Marvel superhero movies, mostly offer the opportunity to watch movie stars operate at their most polished and fantastical. In Sherlock Holmes, 99 percent of the pleasure comes from seeing Downey and Jude Law, two of the most charismatic human beings on the planet, play verbal ping-pong; the rest of the films are an afterthought, window dressing. That’s fine, but what’s left of the man who made Lock, Stock and Snatch is a penchant for slo-mo action and voice-over; these movies could’ve been made by any of the directors in the major-studio franchise pool.

After Sexy Beast, Jonathan Glazer made Birth and Under the Skin, two twisted and lovely movies that turned him into one of our most interesting experimentalists. After Layer Cake, Matthew Vaughn — who, it should be noted, produced Lock, Stock and Snatch — made three of the more noteworthy and original action movies in comic-book land. Starting British, they didn’t stay British, or stay constrained by their Britishness: They found other qualities that defined them. Ritchie seems stuck in the same feedback loop. Post-U.N.C.L.E., he’s making a King Arthur film, in which Charlie Hunnam will play Arthur as a medieval spin on Ritchie’s early-career hustlers. As long as Ritchie keeps making these nine-figure films, he can’t just go back to the streets of London. Instead, he has to Trojan-horse the things that make him unique into these movies that can play in China.

Guy Ritchie was a famous director before he’d even turned 30. At 46, he’s been funneled by Hollywood into a position as a middle manager, getting major properties to the screen in functional form with the tiniest bit of panache — not so much that they look distinctive, but just enough that they can be distinguished. Unless Ritchie’s willing to shrink way down in scale, it appears this will be his fate. That’s not the worst thing in the world. But even for folks who’ve never liked Guy Ritchie: Would the movies be better off with another Snatch, or another King Arthur?

‘The Right Reasons’ Podcast: 'Bachelor in Paradise' and 'Dating Naked'