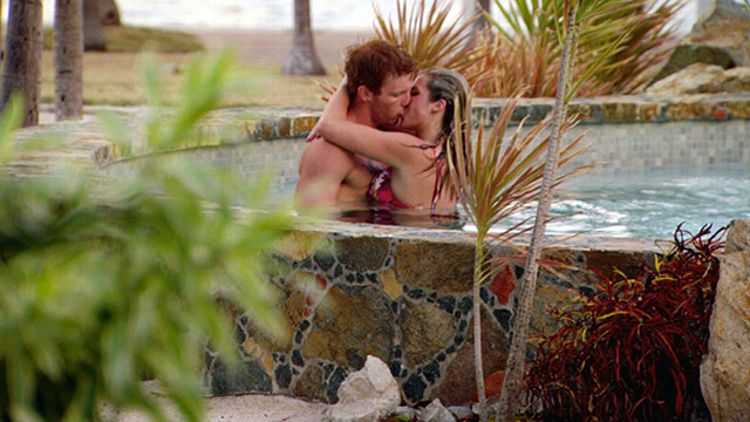 Of all the reality television dinosaurs, The Real World is maybe my third favorite, behind the friendly brontosaurus Survivor and the reliably mean T. rex American Idol. At its best, the flexible format and the world’s endless supply of virgins with weird backstories make for an interesting social experiment (see: Hollywood’s Greg Halstead with his “peasants” and “associates”; New Orleans’s Ryan Leslie with his homophobia and inventive new uses for hair dryers). The compulsory employment, introduced in Season 5 (this season, everybody’s working at an aquarium called Coral World — the aquarium has been used as a metaphor for the show for like 20 seasons; remember that crappy poem from Real World: San Francisco?), provides the only real structure for the show. Its watchability hinges almost entirely on its cast: You don’t have to have any vested interest in housewife culture or assimilated Gypsies to enjoy it, because there’s usually someone to identify with no matter what your bag happens to be. I ran into Puck at the Studio City farmers market two years ago and remembered how influential he was on my junior high school’s loogie-hawking scene, and I can’t hear “Goodnight, Irene” without my brain reflexively playing the words “because you’re a homosexual, Stephen” over it, with a slapping noise.

Real World can get in there, it really can. It can also be a bag of dust and hair that makes you curse the day you ever decided to invest valuable DVR space in its completely worthless, prank-riddled, immense vapidity. Real World: St. Thomas is that bag of dust and hair.

Why does RW:ST suck so bad? There are a lot of reasons for this. First: It takes place on an island, which means not only that the main source of activity is pranks (like placing a dead, stinking barracuda in a housemate’s bed), but also that to get to and from the bars that attempt to breathe life and activity into the cold, blue corpse of the season, they have to take a boat. This truncates the angry shuttle/van-argument shots that add so much to the show, and also gives the viewer seasickness by proxy. Second: There is a cast member whose name is Trey and who wears a ridiculous pirate hat frequently, but most frequently when he’s angrily ranting about something that appears to be of enormous consequence to him. Third: Everyone throws around the word “intoxicated” as though they’re afraid that they will seem stupid for using the word “drunk” instead, and appears 11,000 times more stupid than if they didn’t seem as though they were giving a deposition. Fourth: Two of the cast members, Robb and Marie, happen to have tattoos that say “Hakuna Matata,” and they are in love.

There are millions more reasons why this season is unwatchable, but there is one reason that I continue to watch anyway, and that reason is one of two Brandons. (The other goes by Swift, his last name; he’s so boring that the only thing I can really remember about him, despite having never missed an episode of this draggy epic, is that he forgot his wallet when he went to the hospital because he had sea urchin needles stuck in his foot.) Brandon Kane, who formerly worked at Forever XXI and has impressive ear gauges, is the kind of Real World housemate I could dream up only if I were in a particularly cynical, world-hating mood. (This is why he’s a good addition to the cast.) He has a giant tattoo on his chest in a flamboyant font reading “Forgive Me, Father,” and keeps a diary that he leaves out on patio tables filled with scrawlings reading KILL ME PLEASE KILL ME KILL ME KILL ME. His diary is peeked at; he is livid. Who read my journal?! That was my journal! Those were some lyrics I was working out! He is six months sober from booze and heroin when he shows up at the Ikea mansion, except he, you know, still drinks on occasion (and every day at the Ikea mansion is an occasion, especially because the female Hakuna Matatan is constantly splashing around amphibiously in some mean-juice-filled solo cup). But Brandon is interesting because Brandon is Boston-pale, a little fleshy, and despite getting a job with a stipend starring on a show about socialization, he is completely and utterly alone.

Horrible Trey has cozied up to Laura, whom he casually mistreats, and who often is seen wearing basketball shorts and looking depressed, while Swift has established a flirtation with housemate LaToya (who, by virtue of being sane and never getting stinkingly “intoxicated,” is pretty forgettable), and then there are the soul mates with their worry-free philosophies. Brandon, the seventh wheel, is left scrambling for numbers at the bar so that he won’t have to shut himself off in telephone jail calling psychic hotlines over and over in a bid for scintillating airtime. When he finally snags digits, the rest of the cast administers condescending pep talks about how he should be wary of being used and discarded by attractive sirens who just want to have their reputations tinkered with by MTV editors so their blogs get more hits (I added that). Unfortunately, this advice proves sage, as Brandon is shown cleaning his room — making his bed, then his roommate’s bed, then lighting a zillion candles, presumably scented ones — tenderly and embarrassingly before being heartlessly stood up. You get the sense that that happens to Brandon a lot. He says things like, “This is gonna sound lame, but like, I just want to meet a nice girl and make her breakfast, you know?” I paraphrased, but just barely, because every day I wake up with the hangover of having heard a man with ear gauges and a “Forgive Me, Father” tattoo say this on television. It is hard to watch Brandon’s scenes on The Real World without worrying that he’ll end up like Young Werther, if Werther sat around making playlists in which every song were by Sunny Day Real Estate.

If every season of The Real World has a plot — and that’s a big if, because just look at The Real World: San Diego — the entire story of this season revolves around Brandon, and so far Brandon has received regrettably little airtime (especially for a liability as big as a newly-sober-yet-totally-unsober depressed person). The sensation of being alone among couples, of scrambling to fit in by attempting to force even just one measly Frizz-Eased barfly to understand you enough to stick around for breakfast in front of cameras, is relatable and intriguing. To feel isolated and like a loser is hard enough when you’re not aware that being a sunburn magnet who wears embarrassing chest ink and is given to fits of throwing beer bottles into the pool is the legacy you’re leaving the people who have tuned in early for WakeBrothers. Calculating a persona to broadcast on The Real World often fails; former participants say that you grow accustomed to the presence of cameras and wind up just being yourself.

But it’s hard to imagine that Brandon knew he’d be the guy wearing an orange vest while he impotently tried to paddle a kayak as the people cast as his friends cheered him on as though he were eight years their junior: “Look at Brandon; go, Brandon, go!” Without a Brandon-centric episode every week, you’ve got just another Jersey Shore sequel minus the clashing cultural embarrassment and forced mozzarella-heavy “family dinners”: a televised matchmaking service for the kinds of people who look like reality-show stars, a new physicality that usually entails man-tanks on short, jacked guys and women who, for whatever reason, appear to shop at Bebe. Brandon seems like he could be cross-cast from True Life, a holdover from the days when at least one of the seven strangers picked to live in a house was just straight-up weird-looking and mysteriously unmagnetic, even vaguely repellant. He is the only betta fish in the bunch, accustomed to and maybe intended for a life spent in a bowl all alone, floating above the colored gravel and making sad eyes at the pet-store patrons who decide to go with a turtle instead.

His predicament is almost poignant, but constructing an ensemble show around the only outlier is difficult; maybe we’ll see a lot more of Brandon, maybe we won’t. Unfortunately, if we do, it will probably be because he’s reached critical meltdown mass, and that will just be a shame. There’s already enough there without page 400 of Brandon’s diary becoming some sort of bleak prophecy. It makes you nostalgic for the good old days, for the Trishelles of Las Vegas and the Davids of Los Angeles, when the casts had less polish and little knowledge, it seemed, of exactly what they were getting into. Maybe The Real World should start broadcasting live (while it’s live, there’s hope — loosely translated), or cloaking their castings in some dense language that obscures the potential to appear in multiple offshoots of Challenge: Rivals and the ability to make a living off drinking rum on a pool table until you’re 38. It was never particularly polite, but this season is even less real than previous installments. No man is an island; he’s just on an island, surrounded by idiots.