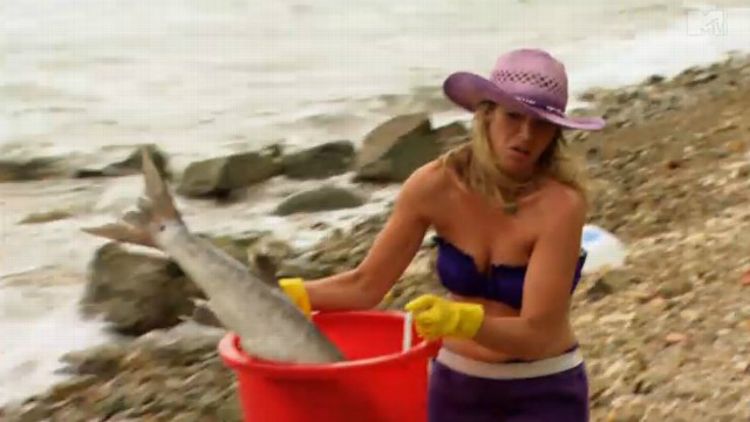 I’m not going to lie to you: This was a shitty week in reality TV. First, there is the fact that Big Ang, the “classy” ladies of Mama Drama, and Joseline of Love & Hip Hop Atlanta are all not in my living room because the suits from Viacom and DirecTV can’t make a deal. Suits, get something done soon; I need these people in my life. Second, it seemed like every show in the GRTFL decided to mail it in this week. The Bachelorette was the let’s-squeeze-another-episode-out-of-this-franchise “Men Tell All” snoozefest; the most exciting event on Real Housewives of New York City was a woman putting her face in a bidet; and the Real World cast is so boring that the producers centered this entire episode around a dead fish. There is good news, though: I have just as much fun making fun of boring reality television as I do compelling reality TV, so you’re in for a treat. Let’s hit up the top scorers:

Chris (The Bachelorette, House), 35 points: Whatever the opposite of the “It” factor is, Chris has it in spades. He isn’t handsome, he isn’t funny, he isn’t a good hang (3 x 5 = 15 verbal-fighting points), and his dancing makes Dieter from Sprockets look like Fred Astaire. So imagine my surprise to see, while watching The Bachelorette, an extended Bachelor Pad teaser clip that featured Chris hooking up with not one, not two, but three of his housemates on the show. Forget the fact that he has the personality of a dish towel, cries all the time (20 points), and has Tommy Chong eyelids. How could three women hook up with a dude who dances like this? (Go to 2:40 in the clip.) I’m so fired up for this season of the Bachelor Pad. I can’t wait to see how Blakeley’s romantic desperation will manifest, how Kalon the über-douche hooks up with Lindzi Who Wears Too Much Makeup, and how Chris the Seizure Dancer turns into Bishop Don Magic Juan.

Doug (The Bachelorette, Connor), 20 points: In this week’s “blooper” montage, we saw Doug naked (20 points) and learned that Emily “always likes the guys that are tattooed or maybe a little homeless-looking.” I give it six months before she is on the cover of US Weekly making out with Russell Brand.

Alessandro (The Bachelorette, Kang), 20 points: GRTFL super-scorer Caitlin Mangum sent me the scores this week, and under Alessandro it said, “20 points: intentional nudity (running through the woods chasing werewolves).” What the fuck? Alessandro got naked and started chasing werewolves through the woods? Huh? There are only three possible explanations for this event 1) this happened and I missed it (likely); 2) Caitlin has been watching True Blood and got confused (more likely); 3) Caitlin was tripping on mushrooms (most likely).

Heather (Real Housewives of New York City, Lisanti), 15 points: Every person’s favorite topic of conversation is themselves. At the end of the day, all anyone wants to do is run around telling everybody who will listen about how nice, rich, talented, strong, smart, etc. they are. Most adults have recognized this about themselves and have put a filter in their conscience that keeps them from constantly bragging, encourages them to ask questions about other people, and pretends to be interested in the answers to those questions. LuAnn from the Real Housewives of New York City does not possess this filter. When Carole says, “My mom had five kids in five years,” LuAnn immediately fires back, “My mom had seven kids.” When someone says, “Jon has a big family, they have twins,” LuAnn blurts, “My brother has twins!” She makes Rickey Henderson look humble. When LuAnn hears a sentence that doesn’t address how amazing she is, her brain panics and does whatever it takes to bring the topic of conversation back to something she can brag about. When two of the girls head off to use the restroom at a dinner, only Heather and LuAnn are left at the table, and Heather uses this opportunity to confront LuAnn about her inconsiderate behavior. The second Heather starts to criticize LuAnn, LuAnn assumes that Heather is talking about Ramona. There’s a twisted beauty when someone’s worldview is so warped that they can simultaneously make every conversation about themselves, yet when criticized, assume that their critic is talking about someone else. Her psychological armor is an impenetrable bat-suit of denial and delusion.

Oh yeah, Heather also got into three arguments with Ramona this week (15 points), and was accosted by Ramona with such ignorance and vigor I actually wrote in my notes, “I understand why they throw so many drinks on these shows.” When you can’t reason with someone, and you can’t punch them, a flying beverage seems like a reasonable compromise. I take back everything I’ve ever said about the Basketball Wives. Oh, wait. No I don’t.

Swifty (Real World, House) 14 points: The first scene of this episode is Marie the International Beer Smuggler and LaToya discovering a dead barracuda washed up on their private island’s shore, and the last scene of the episode is the same dead barracuda washed up on their private island’s shore. This Real World cast is so boring A DEAD BARRACUDA STOLE THE SHOW. As a matter of fact, this week’s GRTFL Top Five is the Top Five Reasons That the Dead Barracuda Is More Interesting Than the Cast of the Real World, listed from “that seems like a stretch” to “he has a point there, that dead barracuda should probably have a spin-off”:

5) The dead barracuda never misrepresented what neighborhood it came from.

4) You can’t turn the current cast into “barracuda nuggets.”

3) The current cast doesn’t have a kick-ass, American-flag-themed bumper sticker.

2) The dead barracuda is less likely to have communicable diseases.

1) Unlike, 29 percent of the cast, the dead barracuda doesn’t have a tattoo that says “hakuna matata.”

Since not a single thing happened in this episode that wasn’t dead-barracuda-related, I guess I’ll tell you the Saga of the Dead Barracuda. Marie and LaToya found the thing on the beach and put it in the Rob With Two Bs and Swifty’s shower, because having dead bodies where you bathe is hilarious. Then, fearing dead-barracuda-related retaliation, they decided to put it back in the sea. Swifty attempted to retrieve the dead barracuda; LaToya tried to stop him with a kayak paddle; Swifty stepped on a sea urchin and then yelled at LaToya (5 points) like a crazy person. Just to give you an idea of the caliber of human beings that we are dealing with here, remedies that were suggested for Swifty’s sea urchin ailments were “drink a bottle of rum” and “have someone piss on it.” I swear when they recommended pissing on his foot the dead barracuda giggled, rolled its eyes, and said, “This is the dumbest, worst-looking cast they’ve ever had.” No one pissed on Swifty’s foot, but he totally drank the entire bottle of rum anyway (9 points). Now inslopsicated, Swifty heads to the hospital, where the doctor tells him to “walk it off.” On the way out of the hospital, they hit him up for $170, he realizes that he forgot his insurance card, and he does the drunken “I got this, dog” thing that drunken people love to do, explaining,  “Can I say something? I studied this. I actually studied this. I specialized this. Let me handle my business like a man. I handle my business.”

There are few things in life more fun than the “let me handle this” drunken guy. In his defense, though, why is medical care the only industry in modern society where they provide the service or good before telling you how much it costs? Can someone explain this to me? When you go to a clothing store, a barbershop, a restaurant, anywhere where goods and services are sold, they list the prices right alongside what they provide. Why is that not the case at the hospital? How many times have you gone to the hospital, left, and then been mailed some insane bill two weeks later? I hope the president reads this column, says to himself, “This guy has a point,” and calls me for advice on how to change the medical care industry. Without hesitating, I will exclaim, “I studied this. I actually studied this. I specialized in this. Let me handle my business like a man. I handle my business.”

Sonja (Real Housewives of New York City, Kang), 10 points: Sonja plugged in her toaster oven (10 points), filled the bidet of her hotel bathroom with ice, and stuck her face in it. While carrying the ice, she walked right past the sink and stuck her face in the bidet. I hate it when the people on these shows do something so ridiculous I can’t even make fun of them for it.

Ryan (The Bachelorette, House), 5 points: Can you name four naturally blond men that you cosign on? Seriously, getting up to four will take you at least two hours. I have nothing against blond bros, I’m just shocked that there are so few of them who got an extra helping of awesome sauce at the baby factory. There are tons of blonde women who are universally loved and tons of ginger bros you would love to hang with, but what is it about blond dudes that doesn’t resonate? How is Robert Redford the only bitchin’ blond guy that anyone can think of? After asking a dozen people this week, I’ve come to the conclusion that Robert Redford, Leonardo DiCaprio, Alexander Skarsgard, and Chris Tucker’s character in The Fifth Element are the only blond dudes who are universally loved.

I bring this up because on The Bachelorette: Men Tell All this week, the in-studio crowd couldn’t get enough of Sean the Too Perfect Guy, screaming every time his name was mentioned. I imagine the ABC suits who were there took note and will soon anoint him the next Bachelor. Which is a total drag because my favorite to be the next Bachelor, Ryan, wasn’t only overshadowed by Sean, he was totally shut down by Chris Harrison when the prospect of Ryan becoming the next Bachelor was proposed. My wife agrees about Ryan, when the crowd was going all teenage-girl-at-a-Beatles-concert over Sean, she looked up from her phone and blurted, “You are a dork. All these guys are losers. I hate all these guys except that tan dude. The one that is kind of a dick.” On-brand, Ryan got into an argument with Chris (5 points). I get the feeling that we haven’t seen the last of Ryan. He may never get picked to be the Bachelor, or even to end up on Bachelor Pad, but he will totally pop up in a couple years on Amazing Race, or Celebrity Rehab, or, ya know, in a mug shot.

Ramona (Real Housewives of New York City, House), 5 points: Ramona was off to a solid start this week, scoring 15 points for three run-ins with Heather, but then ruined it all by losing 10 points for turning down an alcoholic drink. Something must be wrong, because her turning down a drink is like Jose Canseco turning down an interview.

Make sure to check the GRTFL next week, we will be adding Bachelor Pad, which is easily the best/worst show that will be on television all summer.

Jesse Pinkman Freaks Out on The Price Is Right