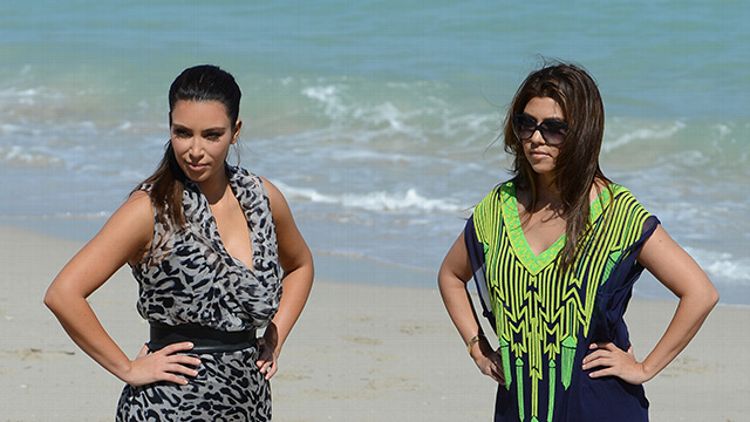 Kim, Kourtney, and Jonathan Cheban go paddle-boarding. Kim is wearing half a wetsuit, like the banana on the cover of The Velvet Underground & Nico. She never tries to stand up on her own board, she just laughs at everyone else who tries and falls. Metaphors!

From a Snap & Go in the back of an SUV, baby Penelope says her first word or whatever and then Kim asks, “What do you think of this dragon-boat thing?” There’s this race coming up where you paddle these giant boats, she needs a bunch of people, she wants all the Kardashians to fly in from L.A. — she explains all this, like it’s an idea that spontaneously occurred to her, like there’s nothing she’s wanted more in her life. Kourtney leans over in a weird way to breast-feed the baby while the car is in motion and some mouse-assembles-people-food-items-into-a-comically-large-sandwich music plays to tell us that this is funny. Weird squarish hair on Kim in the talking-head segment here, very Bene Gesserit.

Kourtney and Kim are always working, Kim says. This means they go to a furniture store and argue with Scott, who’s sunburned and has decided that not being into the whole boat-race concept will be a fun position to take, even before he finds out that Bruce Jenner will be making the trip out. “I respect that he’s competitive — obviously he won the Olympics because he’s competitive,” Scott says, but he won’t do it if Bruce is involved. Remember that time Bruce Jenner won the Olympics? The whole Olympics? It’s because he was competitive.

Speeded-up day-to-night-to-day transitional shot; somebody should edit Breaking Bad music over these, put it on the Internet. I should do that. I should make something of myself, quit this dead-end job I have now. I should be competitive. Entrances at the Eden Roc: Kris Jenner in a scarf with skulls on it, signifying the death-of-all-hope that she personifies, and Kylie Jenner, and also Bruce’s son Brandon Jenner and his wife, Leah, who have a band called Bruce & Leah. Based on “Life Happens,” I’m going to go ahead and conclude that all their music sounds like a pair of Toms Shoes half-mastedly fucking a box of all-natural dryer sheets, but I haven’t dug any deeper into their catalog; I guess it’s possible that “Showstopper” is about killing cops.

Kim talks some more about why she’s so hell-bent on making everybody do this dragon-boat thing. “Anytime there’s an opportunity to create a new memory, even if it seems so silly and stupid,” and I neglected to write down what she said after that, but it wasn’t “the producers tell us to do it and we do it,” so it’s a lie. Scott continues to hold out. Everybody goes to the gym and works out with giant inflatable balls; Kim explains that rowing is about your core, not your arms, and tries to convince Bruce to stop doing old-fangled stretches. Bruce gets angry and says, “I beat the whole world.” You’d think he’s the only person in the family who’s ever achieved success based on talent and hard work or something, the way he carries on. Mr. I Beat The Whole World. Mr. I Practiced Doing Something Until I Was Really Good At It. Blah, blah.

Everybody gets together for lunch. Kim points out to Brandon that her dad dated Priscilla Presley and Brandon’s mom (actress Linda Thompson) dated Elvis and isn’t that weird? It totally is. I go down a Linda Thompson rabbit hole on Wikipedia for five minutes. In Memphis, in the ’70s, she was Miss Okra, Miss Liberty Bowl, and the Golf Queen of Memphis State. In 1977, she joined the cast of Hee Haw, “wherein she was in the cornfields until 1992.” She did a Starsky & Hutch episode, did a Vega$, did a Fantasy Island, did a Fall Guy. She was in Three on a Meathook — a picture you won’t ever forget — and she was in RoboCop 2, and she wrote the lyrics for “I Have Nothing.” They made a movie about her time with the King, with Stephanie Zimbalist as Linda and yes, that’s Don Johnson as Elvis and you are now freaking out.

Captain Kim books a conference room at the hotel and makes everybody sit on a big table and pretend they’re rowing. At first Scott doesn’t bother to show up but eventually they shame him into participating. Kris Jenner’s not there either, but nobody goes and hassles her about it. Since it means less screen time for Kris Jenner it’s not an injustice I’m going to protest. Bruce is wearing his Transitions glasses and his transitioning-genders face. He tells Scott to “man up,” and instead of writing a joke I burst into flames and run around the room.

Scott tells Kourtney he can’t handle the full Kardashian invasion, and that he’s decided to dip out to Vegas for a personal appearance instead of doing the boat race. “I’m an only child,” he says. “My whole life, I’ve been by myself, and now I gotta live with 90 of you people,” which is exactly how I feel about my life before and after I started writing this column.

Kourtney tells the talking-head camera, “I’m assuming Leah is in her first trimester,” and makes Leah and Brandon go with her to the stroller store, because you can’t be on this show without the Pregnancy Police all up in your utes. Kim gives her mom a present in a black box — we’re never told what it is, so I’m assuming it’s a delicious human soul — and tells Kris and Bruce that she’s ditching the boat race, too, because Kanye’s stopping over in Miami en route from Hawaii to Paris and they haven’t seen each other in almost three weeks. Kris gets mad and says, “He could be in the boat race!” Take however much time you need to picture that — really enjoy it, it’s Monday and you made it all the way to work, you’ve earned it.

Kim says something about how Kanye’s motto is “Don’t f[bleep]k with me.” Drake’s motto is better. In Vegas, Scott eats from a sushi platter fit for an aquatic tyrant at Blue Ribbon and tells his brolos, “I was reading basically don’t-kill-yourself books today in Miami,” which is basically my favorite kind of self-help book also.

“You really do look like your dad in the ’70s,” Kris tells Brandon back in Miami, and then there’s a fake argument in which Kim comes in and says now she can do the boat race after all but Bruce won’t let her. Pretty sure Tommy Wiseau guest-directed this scene.

You’re thinking the dragon-boat race has to be next, right? Psssh. First there’s some kind of dispute about T-shirts; I don’t bother rewinding to figure out what it’s about, but it ends with Kris calling Bruce “the most annoying human being I’ve ever met in my entire life, honest to God.” Bruce goes to see Kourtney; she’s holding Mason, who’s dressed as Turkish Spider-Man. It doesn’t matter what happens here; the point is that Bruce (who’s replaced Kim as captain of the dragon-boat team) has become an aquatic tyrant, and a snippy one, too. Bruce and Kris have a “No it doesn’t”/”Yes it does” fight that goes on for so long that my wife takes my daughter and leaves me and eventually my daughter comes back as an adult to tell me I’ve ruined her life, like in Synecdoche, New York, and then finally it’s the day of the dragon-boat race.

Kourtney tries to convince Leah to take it easy, which on the one hand is a decision Leah should be able to make for herself, although on the other hand Leah kind of seems like someone who might need help with the decision to take her hand off a hot stove. I’m not saying she seems not smart, but if she played Mercy in Boggle I wouldn’t bet against the cat.

And then, TWIST, Kim shows up with her own team, composed of a bunch of chiseled ringers (including celebrity trainer Harley Pasternak) and secret weapon Jonathan Cheban. Kourtney says, “Where did she recruit these whores from?” and I start to fall in love with her a little. Kris quits Bruce’s team and joins Kim’s team. You can tell Bruce is trying to come up with an ace Richard Burton–in–Who’s Afraid of Virginia Woolf?–grade snap for this situation that somehow invokes Kris’s responsibility for their sham of a marriage but the pressure gets to him and he just sputters something about how she’s a cheater and a traitor.

And then there’s a dragon-boat race, and I know I’ve had my fun with this concept so far but let me tell you, it turns out to be worth the wait. Here’s some exclusive footage:

Back at the hotel the valet asks Bruce how he’s doing and Bruce tells the valet “We won” because the valet gives a shit. And then at dinner Leah goes to take a sip of wine and Kourtney says “Leah, what are you doing? You can’t drink” and everyone freaks out and then it turns out she’s not pregnant and everyone freaks out even more. Kris demands that she say “Bible,” which is a special word for “I swear” that the Kardashians have been trying to make happen for years. Leah says “I’ve never said ‘Bible’ in my life, but, Bible, I am not pregnant.” Bruce wonders who’ll be the next Kardashian to get knocked up; Kris says “I hope it’s Khloe,” and everybody toasts, and I raise a glass to the possibility that Khloe will develop the ability to kill people with her mind and go Carrie White on this whole family.

Next week: From the looks of things, Rita Ora cheated on Rob Kardashian and all he got was sleep-apnea fat.

Drake Gets Promoted to Night Manager in His New Video