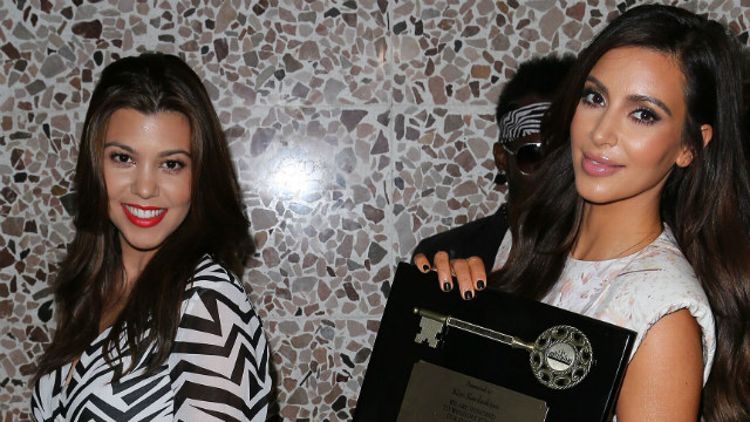 Here’s how I overprepared for what turned out to be a forgettable Kourtney & Kim Take Miami this week:

On Sunday we drove to Gelson’s, the champagne room of L.A. grocery stores, because only they have the good cat litter and the good laundry detergent and the only brand of natural peanut butter I’ve ever had that doesn’t taste like dirt-spackle. Because it’s Gelson’s, these three items cost us only $758. I also bought every magazine that had a Kardashian on the cover, because I take my responsibilities as a Kardashian Korrespondent seriously.

As discussed last week, with regard to the Kardashian wombs, there are two narratives: There’s the story about Kim Kardashian finally getting pregnant with Kanye West’s baby after between three and six long torturous months of trying, and there’s the story about how, given her sister Khloe’s years-long and so-far-unsuccessful struggle to have a child, Kim’s insistence on portraying her pregnancy as “kind of a miracle” in the press is a little obnoxious.

OK! Magazine‘s cover story “FINALLY! A BABY SHOWER FOR KIM!” advances the first narrative, straight-facedly treating this baby’s conception like it’s the first break Kim Kardashian’s ever caught in her miserable life and itemizing the various brunch-food stations her shower will allegedly feature — omelette, crépe, waffle, if you’re curious. You can tell OK! is on Team Kim because Kim gets a page of speculative baby-shower gifts (a Mischka Aoki baby-dress made with Swarovski Elements), whereas OK!‘s coverage of the equally knocked-up Jessica Simpson a few pages later consists of a story about her “CRAZY PREGGERS CRAVINGS.” She puts salt on her cantaloupe, like some kind of fucking monster.

Life & Style Weekly, meanwhile, builds a poisoned omelette-crêpe of a cover story around a picture of Khloe looking puffy and embattled. The Kim-hurts-Khloe’s-feelings controversy is discussed; there’s a cantaloupe-salt-in-the-wound recounting of how Lamar Odom gave a Minneapolis stripper named “Jasmine” (quote-marks theirs, unless the stripper’s stripper name is actually Quote-J-A-S-M-I-N-E-Unquote, in which case, wow) “her most profitable night in weeks.” The cover also promises “New evidence … about the identity of Khloe’s dad,” which turns out to be a circumstantial paragraph about the late Robert Kardashian allegedly fuming in his alleged journal about Kris Jenner and her alleged paramour Todd Waterman allegedly taking Khloe to see The Little Mermaid, which doesn’t seem to have anything to do with anything unless it turns out Khloe’s real dad is King Triton.

Anyway: I’m dwelling on off-screen reality because this week’s Khloe-less #KKTM was such a nonstarter. Two plots: Scott attends a boozy and horseplay-focused but not-otherwise-particularly-debauched-seeming pool party at the home of his new race car–driver pal Chapman Ducote and befriends a genial lesbian named Dani, and Kim starts stealing Kourtney’s breast milk after discovering that it soothes her psoriasis when topically applied. You’ll notice that another week has gone by without anybody really doing anything that qualifies as “taking Miami.” Even last week’s gripping commercial-real-estate-shopping subplot has fallen by the wayside; I think we saw Kourtney outside the confines of the Eden Roc exactly once this time.

Scott fails to return from Chapman’s house in a timely fashion, so Kourtney Skypes their couples therapist, Erica Hershey Jaffe, who suggests that Kourtney write down her angry thoughts about Scott instead of conveying them to him in “a bunch of crazy text messages.”

Kim and Jonathan Cheban — who’s apparently decided that the way he can best be of use to the universe is by helping the producers of this show sell the highly suspect notion that Kim Kardashian is a barrel of laughs — sit around Googling natural remedies for Kim’s psoriasis. “I heard tar really helps,” Kim says, and Cheban nods and says, “Tar fixes everything,” as if it’s something everyone knows. Then Kim reads something about the psoriasis-soothing properties of human breast milk, and a plan to raid Kourtney’s stash is hatched, and I blow an air-horn I keep next to the couch and yell “B-PLOT!” loud enough to wake the neighbors. “Look how fun that is, just to have her roaming around like that,” Cheban says as Mercy the cat wanders by, one day closer to death.

Kim makes fun of Scott for saying “What’s poppin’?” and Scott replies, “I’ve heard you say some pretty ghetto terms.” Scott goes to lunch with Dani, who invites a bunch of friends who self-identify as “lipstick lesbians,” having apparently just walked out of a pseudo-anthropologically prurient men’s-magazine feature from 1992 and into this restaurant. Dani talks about why the gay-marriage issue matters, in case any conservative politicians are watching Kourtney & Kim Take Miami; later, she confides in Scott that she’s dating a woman who’s never dated a woman before. Scott reacts in a supportive manner. They bro down.

Scott tells Kourtney how much he enjoys hanging out with the lesbians. “I’ve always wanted to be a water boy on a football team,” he says, because apparently being the auxiliary Kardashian who literally carries water for this show antics-wise is not enough of a water boy experience. He talks about the hilarious lesbian names the lesbians thought up for the speedboat he wants to buy — including Lez-B-Honest and the somewhat more on-the-nose LezBoat — and then mentions how easy the lesbians are to talk to, a statement Kourtney takes as an insult-by-implication. She storms out; Scott storms out. Kim is left at the table with the breakfast mess. “Thanks. Am I gonna clean this up by myself?” she says, as if there are not nine production assistants waiting just out of frame to sanitize the table the minute she walks away from it.

Kourtney is typing her Erica Hershey Jaffe–recommended vent–e-mail to Scott. She’s not supposed to actually send Scott this e-mail, but Kim grabs Kourtney’s BlackBerry to read what she’s written and accidentally hits “send” with her clumsy second-act-inciting-incident-creating monkey-fingers. Scott reads it, bursts in, yells at Kourtney, leaves. Kourtney says “Thank you so much” to Kim, so witheringly it practically comes out of her mouth as a word balloon with stalactites hanging from it, then says, “I just need to be away from every freak around here.” Exit Kourtney, to the tune of angry techno music that sounds like someone rhythmically stomping bubble-wrap.

The Scott Disick, Token Straight Guy plot-thread will be resolved by the end of the episode; Kourtney, Scott, and Mason will meet Dani for ice cream at Serendipity, and Kourtney will say to the talking-head camera that she’s “really glad” to have finally met Dani, in a tone of voice that wouldn’t move the needle on the world’s most sensitive enthusiasm-detector. It’s pretty clear that Kourtney had exactly zero desire to take Miami and/or return to television before losing the baby weight that Kim keeps pointing out she hasn’t lost, that she wouldn’t be here at all except that she’s got two kids to support, plus somebody’s gotta keep Lord Disick supplied with Rolls-Royces and sword canes. This is going to be the most desultory season of Kim Kind of Takes Miami While Kourtney Meets Her Contractual/Familial Obligations by Sulking in a Hotel ever.

The breast-milk story line has two endings, just like Skyfall, if one of Skyfall‘s endings involved James Bond’s publicist friend agreeing to be filmed with a breast pump slurping away at both his nipples. Later, Kourtney catches Kim raiding her milk-fridge and makes herself a hero to at least three different fetishist subcultures by holding Kim down and forcibly squirting her breast milk directly onto Kim’s leg. “That is so disgusting, that you can just squeeze that and have it come out,” says Kim. Nobody tell her about the part of being pregnant where a tiny poop-covered human comes out of your vagina.

Next week: Bruce Jenner comes to town and impugns Scott’s masculinity, which is like having your sentience impugned by a piece of cheese, but whatever.