The Five Craziest Things About Metallica: Through the Never 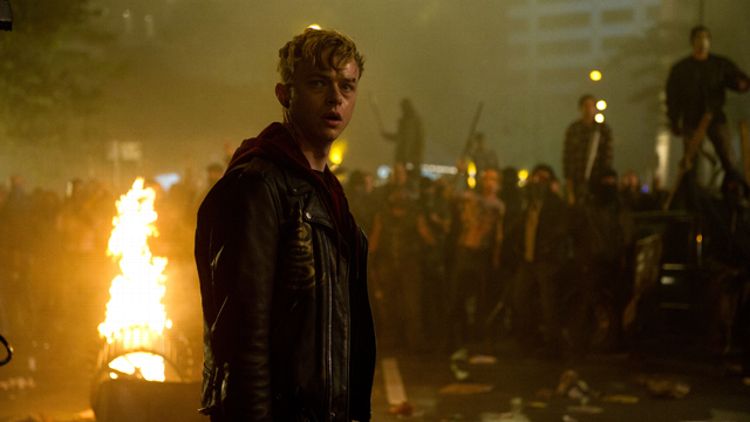 I don’t know why I expected anything else.

The last time Metallica was the subject of a movie, it was 2004’s Some Kind of Monster, an excellent documentary from the directors of Paradise Lost that was a fascinating, unflinching portrait of a band cracking at its foundation. Oh, and proof that the members of Metallica are crazy.

That probably should have been an indication that the latest bit of Metallica cinema would be equally insane, albeit in a slightly different way. This time around, it’s Metallica: Through the Never, a concert film with an added fictional subplot, all directed by the guy responsible for rebooting a franchise once starring Arnold Schwarzenegger with the guy who kissed Halle Berry. It was difficult to limit the following list to five, but I did my best. This movie is ridiculous. (And, truth be told, pretty awesome.)

[WARNING: THIS CONTAINS MAJOR SPOILERS, INSOMUCH AS THERE CAN BE SPOILERS FOR A CONCERT FILM.]

The movie starts outside of an arena in what I believe is Vancouver. Dane DeHaan (Chronicle, Place Beyond the Pines, likely many good movies from here on out) is a roadie on a skateboard on his way to the bowels of our nondescript sports complex to deliver a sketchy brown paper bag to someone important. Along the way, we meet the members of Metallica doing what each of them are presumably doing all the time: James Hetfield driving a funny car with flames shooting out the exhaust pipe; Kirk Hammett being overly kind and weird with guitar techs; Rob Trujillo prowling around in a room filled with giant amps, plucking away on his low-hanging bass; and Lars Ulrich staring people down like an asshole.

DeHaan drops off the bag, and soon after, we see the time-lapse shot of the arena filling up to “Ecstasy of Gold” before “Creeping Death” begins. This is important. “Creeping Death” is the best live Metallica song, a six-and-a-half-minute bludgeoning that requires the crowd to chant “Die! Die!” over the entire bridge. Let’s just say that starting with it sets a tone.

It’s during this chant that the unnamed, unidentified band manager comes to pull DeHaan from the crowd. There’s a problem. One of the tour’s vans is stranded without gas in the middle of the city, and there’s something very important inside. He hands DeHaan a map and a tank of gas. And that’s when shit starts getting weird.

Before hopping into his van, DeHaan pops a blue-and-red pill. Why he takes it, or whatever it might be, is never explained. Oh, and I should mention: The directions from that manager guy are the last piece of dialogue … in the entire movie. DeHaan says exactly zero words in 90 minutes.

But in a matter of about 10 minutes, DeHaan’s rickety van is T-boned at a stoplight, he starts walking the empty streets, and finally, he stumbles upon a riot. Again, the riot is never explained. There’s just a riot, and he spends the next hour running from a guy who’s wearing a gas mask, riding a horse, and wielding a giant hammer.

This movie is really violent! At times shockingly so. Shortly after our meeting him, the masked rider lassoes a fleeing man with a noose and attempts to hang him from a light pole. He’s unsuccessful, but soon, after DeHaan manages to escape his first bout with the street carnage, we see that he’s been very successful several times tonight. Hanging near a bridge are about 10 bodies. The whole scene is jarring and unnecessary.

Eventually, DeHaan finds the van, and inside is a Pulp Fiction–esque duffel bag. At one point, in fleeing his pursuers with the bag, DeHaan decides that the best course of action after being trapped in a corner is self-immolation.

In the interest of full disclosure, I probably should’ve mentioned this earlier: I love Metallica. In middle school, I had so many Metallica T-shirts that it was probably my defining characteristic. I’ve seen the video of the 1989 show in Seattle at least — at least — 25 times.

I mention this only because it would seem like it would take a lot for my opinion to be elevated in any way by a live Metallica performance from 2012, but somehow, this movie managed it. Almost every review of Through the Never has mentioned this, but purely as a concert film, this movie is incredible. The way it’s shot provides a welcome intimacy for a band this massive. You can feel Hetfield’s spittle fly onto your face.

I also mention it so you’ll excuse me nerding out for just a second. The set list as a whole is fine. “Creeping Death,” “Battery,” “Master of Puppets,” and “One” are all staples, and in this context, I’m willing to slog through songs like “Fuel” and “The Memory Remains.” (Although I actually became convinced that some of the crowd had been digitally added when I saw the enthusiasm for 2008’s “Cyanide.”) The one welcome surprise was “Ride the Lightning,” the title track off 1984’s eight-song throttling. Still, none of that was really new.

What was different, at least for me, was a rekindled appreciation for Metallica lyrics. For the most part, I’ve never really cared about them. I love Metallica for technical proficiency and pure, all-consuming power — not for “Nothing Else Matters.” But both the fictional side of the movie and the stage theatrics acted as a way to glean just how vivid Hetfield’s storytelling can actually be. For the title tracks for Metallica’s best three albums, there was an added visual element that was both egregious and sort of cool. During “Ride the Lightning,” a giant electric chair with actual bolts of electricity hung above the band. During “Master of Puppets,” small white crosses came out from beneath the stage. During “ … And Justice for All,” a 40-foot Lady Justice was assembled onstage and then (I’m assuming digitally) destroyed. As someone who has seen dozens of Metallica shows, it was something I’d never seen before.

So this isn’t a part of the actual movie, but it’s worth mentioning. The screening I saw was on Thursday night, at 10 p.m., at the Chinese Theatre in Los Angeles. As you might expect on the night before the movie actually opens, it was filled with diehards in combat boots and Metallica T-shirts. Knowing Lars Ulrich was introducing the movie might have also played a part.

Lars made his way down in front of the screen around 10 … wait, first, a quick note about the Chinese Theatre. I see movies alone all the time. And I never feel awkward. Thursday, I very much did. The Chinese Theatre is not a movie theater. It is a giant, beautiful movie palace with balcony seating, and overall, a pretty perfect place for something like this.

Anyway, Lars came down to introduce the movie, and somehow did so without the slightest bit of security. In a theater full of crazy fans of a band that has sold 50 million albums in the past 20 years, that might be a bad idea. People made their way down to the front, and as Lars explained the idea behind the movie, more than a few of them stood next to him to grab a picture. As the crowd grew, you could tell his mood was teetering between “supremely annoyed” and “genuinely scared.” At one point, in what I assume was a cry for help, he said, “All the security guys are coming later,” before asking the theater usher, “How’s your light there?” while taking the airplane runway light stick from his hand. Luckily, the tiny Danish man escaped without injury.

Following his self-immolation and the vicious beating he gets while on fire, DeHaan wakes up on a roof, where he again is face-to-face with our gas-masked, horse-riding friend. He manages to escape his hanging, and in the process, to steal the very large hammer this dude carries around. At this point, DeHaan slams the hammer on the roof, smashing all the glass of the surrounding buildings and — bringing it all back home! — causing Metallica’s entire stage setup to collapse.

In the process, a roadie gets lit on fire and then put out, all the lights go out, and Metallica is forced to plug into a set of tiny amps and play a garage-style version of the song that started their careers, fittingly titled “Hit the Lights.” It’s all hokey as hell, but typically, I wouldn’t mind that. What I do mind is that they’ve already done this. Back in 1998, when Metallica had cut their hair, and Kirk Hammett both wore eye makeup and had a chin piercing, the band put out a concert DVD called Cunning Stunts, the ending of which was a fake stage disaster followed by a dimly lit closing set of songs. I understand that the audience for Through the Never is not Metallica fans that own that DVD (this guy), but really, guys, c’mon.

In a shameless ploy to win back the big-time Metallica fans, the credits start with the opening bass plucks of “Orion,” with all four members sitting together onstage in the empty arena. (“Orion” is the best Metallica song. I will not argue about this.) The seven-minute instrumental plays as names flash across the screen, and DeHaan finally gets his seat in the arena to watch his (presumably, as he risked death to retrieve their duffel bag) favorite band operate at their highest level. The bag sits unopened onstage. We never see what’s inside.

Breaking Bad, in Memoriam: A Moving Video Tribute to the Fallen