The Bridge Season 1, Episode 9 Recap: Supervillains, Pitchforks, and Hand Grenades in 'The Beetle' 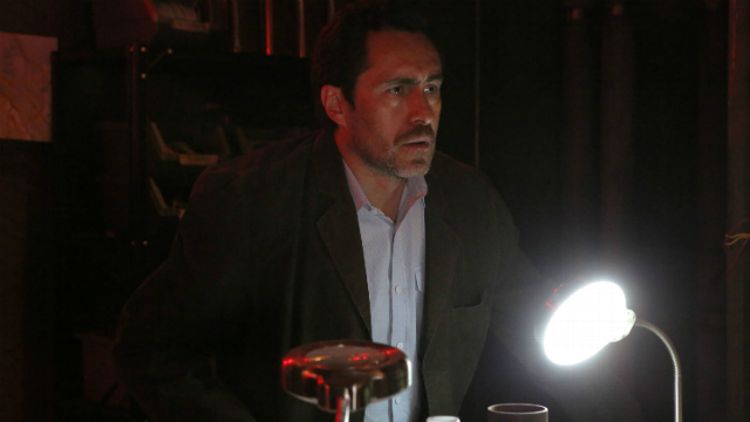 Denmark has always been a good friend to these United States. The small Nordic kingdom has given us so much. Its cuisine is influencing and upending the world. Its pastries are delightful. Its fairy tales remain second to none.

But maybe it’s time to pump the brakes on the unregulated importation of Danish television shows. For years now I’ve been told how excellent the country’s particularly dark brand of noir is, how its hour-long drama series are redefining the possibilities of mysteries on TV. And the thing is, I have no reason to doubt fans of Forbrydelson or Borgen. I’m sure the shows are worthy. But something is clearly lost in translation. The Killing, in English, was as appealing as a plate of ludfisk. And now what I can only assume to be a devotion to the plot particulars of Broen is threatening to sink the very promising The Bridge.

I don’t want to get ahead of myself — there are still four episodes to go. And I was a strong defender of last week’s hard turn toward camp. But “The Beetle” was a … let’s just say it was an aquatic overpass too far for my taste. It represented the first time this season where the parts of the show I’ve been determined to overlook crashed over everything I love in a giant wave and nearly drowned my interest in the process. And I can’t help but blame Denmark for it. Broen, you see, was set on the extremely well-maintained dividing line between Denmark and Sweden. I’ve never been, but I have to imagine the border between two Scandinavian countries, each with ridiculously high standards of living, isn’t the sort of place that can support 13 episodes of drama without a beard-twirling, grenade-giving psychovillain to spice things up. But the border between Mexico and the United States, as both the previous eight episodes and, you know, real life have proven, absolutely is. So why head down this distracting rabbit hole? Last night, watching the busy, bland machinations of Kenneth Hastings run wild over the show felt like taking a delicious taco al pastor and pouring mild Pace salsa all over it.

Before I get into the particulars, let me ask a hypothetical. What if this show weren’t based on a Danish original series? What if it were called The Tunnel instead and it were a haunted, atmospheric hour about a former Tampa hostess now living in El Paso whose rich husband dies under mysterious circumstances? The next day she discovers a dark secret: a tunnel cutting underneath their property that leads to Mexico. As people and problems begin to emerge from this mysterious entry point, she becomes embroiled with the larger world of the border, one from which she, like many wealthy Texans, had been previously shielded. She meets cops and coyotes, shady lawyers and chicharrón-crunching crime queens. An entire universe of problems is brought into the light, all due to that unregulated, un-asked-for tunnel. I know I’d watch that show. I’d want Demián Bichir and Matthew Lillard and Annabeth Gish and Emily Rios starring in it. And I’d want Meredith Stiehm and Elwood Reid running things.

But I doubt FX would have green-lit The Tunnel. Without the proven road map of The Bridge to follow, a show about immigrants and the delicate sociopolitical issues surrounding U.S.-Mexican relations would be a tough sell for a network that prides itself, quite justifiably, for being in the creativity business but is actually just in the business business. And so we’re left with hours like last night, in which nuance, vibe, and oddball possibility — all the things that have made me such a staunch fan and defender of The Bridge‘s bumpy but rewarding first season — are crushed like a bug under the thumb of a madman.

To be clear, this isn’t actor Eric Lange’s fault. Its quite a thing to so subtly shift a performance from inoffensive to homicidal; it’s something in the eyes, in a clipping of the movements. I found his primal screams in the Tangerine Nightmare of the opening flashback to be horrific and affecting. But brilliant psychopaths are fundamentally uninteresting to me. Hasting’s cat-and-hamster game of revenge is so busy, so dependent on iPhones and timing that pushes coincidence past the breaking point, that it leeches away any compelling drama. I’m interested in the emotional lives of characters and the actions that flow naturally from them — less so in the actions that take six years of bomb-wiring, Batcave-building scheming. The culmination of his anti-Marco plotting — at least before he had to improvise and turn an El Paso highway into a demolition derby — was certainly scary. Catalina Sandino Moreno sold the terror of her situation so well I was temporarily distracted by its absurdity. And, due to her status as a guest star, I was fairly certain she wasn’t going to end the hour in one piece. She and Bichir brought real feeling to their potentially suicidal clinch; I was relieved as anyone when the bomb exploded in the distance.

But the thing is, it should be Hasting himself we’re afraid of, not the grenade. I just don’t buy the Bond villain trick of setting up people to die and then walking away. (If next week reveals Gus being slowly lowered into a pit of ill-tempered sea bass, I’ll know we’re in trouble.) It was fine when the faceless Bridge Butcher was making a statement about immigration — as he appeared to be with Maria of the Desert — but here it felt like an easy trick to get us clutching our throats and to get Demián Bichir yelling “puta madre” and slamming his fist into closet doors — something he does awfully well, I must say.

Transforming The Bridge into a manhunt fueled by personal animus not only ran the cops’ story line ragged — a hope for Season 2, should we get one, would be that the line “Sonya, not everything is black-and-white!” joins “That’s not how things are done around here!” in the banned pile — it subsumed all the delicious strangeness of The Weird Bridge, my preferred series. Gone, for the time being, are the provocative politics of the first few weeks. And I greatly missed the presence of our semi-intrepid reporters, Daniel and Adriana. With Santi Jr.’s very public death, does Daniel now realize his own involvement in Hasting’s larger war? (And was he also marked to die that night?) And I’d love to see Adriana’s reaction to the story of the year happening right under her temporarily gussied-up nose. I understand why the police investigation took precedence over the reportorial one — the cops move faster, for one thing; they pack heat, for another — but the absence of the show’s secondary cross-border partnership was palpable.

I was also very sorry to see Graciela dispatched so quickly, gutted on the business end of a prop leftover from Charlotte and Ray’s “American Gothic”–themed sex play. The sudden dispatching of one of the characters I was excited to see grow in future seasons was a cause for concern, though I did appreciate the heroic, shotgun-wielding stand of our old friend Cesar. Charlotte’s behavior worried me, though. One of the appealing things about the character is the way such a cunning social climber has all of a sudden found herself in way over her striving, self-made head. Maybe it was all a front, but didn’t she seem a little too chill with the way things went with Graciela? I’m sure things got rough on the Gulf Coast, but would Charlotte really be so unfazed by taking another human life? No matter how tough Tampa may be, stabbing a human isn’t the same as gutting a grouper. I hope the consequences of this act last longer than it took for Charlotte to kick her rival’s corpse into a shallow, improvised grave.

At least we still had Steven Linder for comfort. Uncomfortable, sweaty, bearded comfort. While the rest of “The Beetle” was chasing predictable beats of tension and release — moments that, I must say, were quite well-directed by Keith Gordon — Steven wandered off into some hazy, Malick-ian dustland fantasy. How nice was it to see Bob again! Bizarre, Bible-quoting, cheeseburger-scarfing farmer/murderer Bob. Maybe it’s the presence of Thomas M. Wright, but these Linder digressions are increasingly reminding me of my favorite TV show of the year, Top of the Lake. In both, predictable binaries of love/hate, good/evil, and religious/despicable are left out to dry in the sun, leaving something gnarled and unpredictable behind, something best enjoyed with a healthy forkful of ham salad. Why does Steven want to hug Eva so badly? What about Fausto’s girlfriend from a week ago? (Oh, and what about Fausto? I missed you and your malicious stogies, mi amigo. Come back soon!) And is a hug from the pungent Steven better or worse than a trip back to Juárez with the human-skin collecting Calaca? All of these questions haunt me more than those surrounding the nefarious intentions of one Kenneth Hasting.

The hour ended with well-done, if disturbing, mirroring of the initial hit-and-run car accident: another bloody woman, another grievously injured son. (Not that the victims were mother and child. Sonya is not a MILF, thank you very much.) The Bridge is clearly more than capable of pulling off a competent story line devoted to serial-killing and super-villainous trickery. I just wish it didn’t have to prove it. It’s a losing game for a critic to start wishing for a different version of a show than the one we’re getting, but in this case I think it’s warranted. Reid and Stiehm have already established their ability to give us something much richer, much weirder, and much better than what we got last night. Their faithfulness to the Danish original is one connection I wish The Bridge would burn.

Robin Thicke is a Big D--- ... and Other Horror Stories From This Week's Tabloids