The Bridge Recap, Season 1, Episode 5: ‘The Beast’ in Broad Daylight 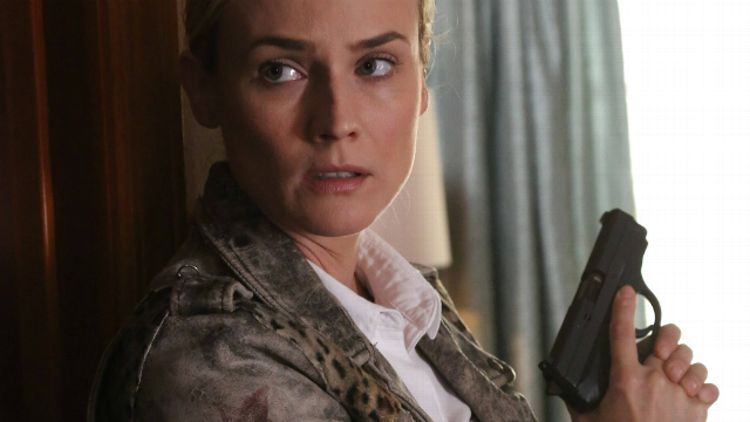 “The Beast” was filled with visceral, claustrophobic imagery: tunnels, locked doors, cages. And graves: The kind we dig for others and the ones we inadvertently prepare for ourselves. “Was it a violent death?” Marco Ruiz asks Sonya Cross about her murdered sister from the other side of a dark apartment. It’s a simple question but it runs deeper than the passageways crisscrossing the ground beneath the Millwright estate. People who don’t live in places like Juárez rarely ask questions like that because the word “death” is powerful and final enough. But death is natural. Death is unavoidable. It’s the violence that needs to be policed and contained; it’s violence that people need to be protected from. On The Bridge, the violence lurks like an animal, around corners, in dark hallways. But the violence isn’t native to Mexico; it knows no borders. As Gina Meadows, the young runaway, learned last night, violence can strike when you climb stairs you shouldn’t and it can be there waiting for you when you’ve escaped back to what should be the safest place in the world. Once violence touches your world, there’s no removing the bruise.

Everything clicked last night on The Bridge. It was an exceptional hour of TV; it felt as if the writers (in particular the credited Esta Spalding, an accomplished poet who once wrote of absence as a “province of the heart”) were no longer writing toward their characters, but rather that they had finally arrived. The tone, always so haunting and promising, finally found a match with the content as “The Beast” sprawled both outward and inward, artfully casting light on previously obscured corners of the show’s universe even as that darkness crept closer into Marco and Sonya’s lives. I don’t think it was a coincidence this was also the week that the serial killer — a.k.a. the El Paso Apple store’s no. 1 customer; how many iPhones can one sociopath possibly own? — took a backseat to non-faceless characters and motivations. (That’s not all he did, of course. Helping Sonya realize what the FBI was hiding wasn’t just a lot more sympathetic than hog-tying a woman in the desert, it was also more interesting.) I’ve been arguing for weeks in this space that the serial killer, so vital to practically every other new show of 2013, was really just a gateway drug on The Bridge. Now that he’s hooked both the protagonists and our attention, he’s more than welcome to recede back into the shadows. There’s plenty of stuff to look at it in his wake.

Besides, the killer’s rough metaphors work better in the hands of skilled writers, producers, and directors anyway. Yes, he made his point by jamming together two bisected corpses, one American, one Mexican. But The Bridge has proven itself more than capable of tracing the contours of challenging, cross-border relationships without the benefit of such stunts. Furthermore, it does so with an admirable amount of impartiality. The Mexican characters aren’t just given the chance to speak freely in their own language — it shouldn’t be noteworthy just how much of The Bridge is subtitled, but it is — they’re also allowed to have their own perspectives, their own idiosyncrasies, and their own flaws. Mexicans aren’t presented as a monolithic other; no one set of bad behaviors or honorable intentions is presented as a lazy catchall for a diverse nation. Instead, we have Marco and Alma and Adriana and Cesar and Fausto and Graciela. A mix of citizens and criminals, cheaters and strivers, all with their own experiences and opinions of their powerful, inscrutable neighbors to the north. It shouldn’t be noteworthy just how many times characters mutter something along the lines of pinches gringos, but it is.

The first scene of the episode may well have been its best, and it cut straight to the heart of the show’s interest in … well, not balance exactly, but at least in paying attention to both sides of the scale. Fausto Galvan and his sweaty associate — rumpled and terrifying, already two of my favorite TV criminals of a crime-obsessed era — are puzzling over the very American phenomenon of a “serial killer.” From their perspective, there are plenty of people who kill a lot; violence, to them, isn’t an aberration but an opportunity cost. What Fausto decides, just before shooting Calaca’s cousin in the face, is that a real monster is someone who “enjoys” killing. Fausto no lo disfruta putting bullets in people. But he does enjoy the fruits of those murders. Which, of course, provides an interesting contrast with the “Bridge Butcher,” who does seem to be having fun as he tools around the region beheading Federales and spurning Fausto’s hard-earned blood money. I’m certainly not saying one of these sickos is better than the other. I’m just enjoying the murkiness of a show that, like The Wire, takes time to play with the idea of a moral hierarchy that extends into the criminal class. There are no high horses on The Bridge; Rio, the last one we met, ended up strung up and bleeding out in Charlotte’s barn.

Last week Agent Gedman — and the FBI’s vaunted planning — went to pieces. The fallout provided space for some much-needed character work all across the cast. The biggest set piece was Steven Linder (rocking undergarments from the Walter White Collection, no less) taking out a contract killer with a humble clothes iron. The entire confrontation was brilliantly filmed by Gwyneth Horder-Payton; all suffocating tightness and the stink of terror-sweat. And I continue to enjoy Thomas M. Wright’s unflappable dedication to Steven’s brand of mumblemouth weirdness (“Oh dear”).

But, perhaps unsurprisingly, I was even more fond of the smaller beats exchanged this week between Sonya and Marco. I loved her unannounced arrival at Sunday dinner — “20 minutes and then we talk about beheadings” — and her complete lack of table manners. And I loved that it was Marco who had to explain to Sonya the very American cliché of police partners and the need to trust each other above all else. (An alternative would have been to give her this T-shirt.) I took issue with Marco and Charlotte’s fling but “The Beast” did nearly enough gap-filling to ease my mind about it. The confident and charming Marco Ruiz we see swanning around El Paso has a darker tint at home where Gus and Alma recognize all too well the signs of his infidelity. Any man who thinks of himself as being above bribes must also think of himself a lot. Action without concern for consequences is a hallmark of both heroes and narcissists.

As for Charlotte, of course she’d put the moves on a stand-up cop when the alternative is Sack Lodge’s cabana boy. The hunk she ordered up from Florida didn’t specify what drinks he wanted but you just know Cesar spent the day stocking the Millwright fridge with Bud Light Lime-A-Ritas. I have a feeling this bro will be sticking around awhile. I mean, look at the spread. He’s a cheeseburger in paradise!

Last night also proved my developing theory that no one perks up at the thought of playing a burnout quite like Matthew Lillard. He embodies Daniel Frye with the right mix of coked-up confidence and hangover-avoiding mania. The scenes he shares with Demián Bichir exhibit more chemistry than the inside of Frye’s medicine cabinet — although, to be fair, the affable Bichir would have chemistry with a traffic cone. But I like the Frye/Cross scenes even more. “You do a lot of drugs, don’t you?” she asks. “Why?” Frye’s answer — “because they’re there and they’re fun and they make you hate yourself just a little bit less” — was funny, but Sonya’s long reaction was insightful. Diane Kruger is getting hammered in some corners for her gawky intensity, but I think she’s doing something quite subtle here. Unlike most things that people explain to her, I actually think Sonya internalized Daniel’s reasoning. She’s interested in fun and maybe liking herself more; one could almost imagine her joining Daniel on a bender if only for the scientific insight it would provide into that strange and unknowable species that surrounds her, a species commonly called “other humans.”

The introduction of a sullen runaway teen, especially one with no initial connection to the overall plot, must have had many TV viewers reaching for the cougar repellent. But I found the Gina story line compelling and, ultimately, rewarding. Stuck in a situation that, to her, seemed as bad as it could possibly be, she marched across the border in search of escape. It was a reverse immigration of a sort, a forgotten person in search of a better or at least different life. And though her crossing was remarkably benign, especially compared to the desert travails of the migrantes a few weeks back, her experience was no less fraught.

In the end, the small-scale heroism of Esmé — running away from her own boyfriend (or was it husband?) to save Gina from a secuestro exprés — was remarkable, given the circumstance. And it allowed for some expert exposition on the pink crosses and the horrible, unending femicides of Juárez. The Bridge is doing something awfully smart here. It can’t use its serial killer plot to “solve” an as-yet unsolvable wave of real-life murders. But it can link them in the idea of La Bestia, the faceless, multiheaded violence monster that shuffles just outside the bounds of polite and lawful society. Cops and paranoiacs alike have long known the truth: There really is something out there; there truly are things that go bump in the night. What’s happened on The Bridge is that that awful something is now here, in broad daylight. Now everyone can see the beast.

Lamar Odom's Mistress Speaks ... and Other Depressing Tales From This Week's Tabloids