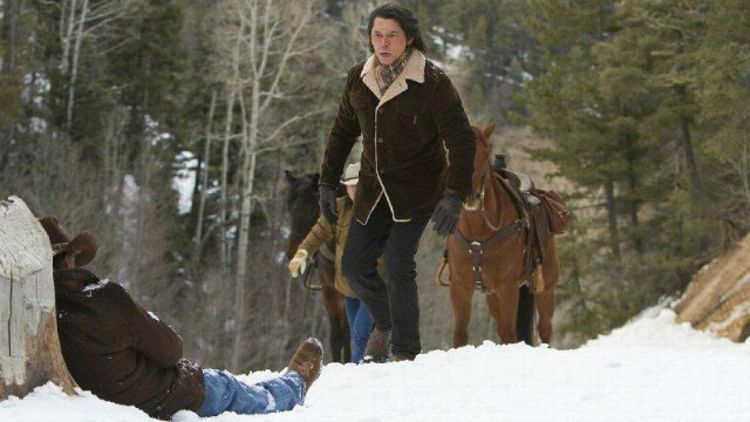 [Editor’s note: This post contains some pretty graphic and violent GIFs. But you might have guessed that from “Murder-Plagued” being in the headline.]

“What the hell is happening to my county?” —Walt Longmire

TV procedurals, as Andy Greenwald observed last month, “have long had body counts comparable to a land war in Asia.” Those body counts are what bring us together today. In short, they’re begging to be quantified. Each of us has a certain level of tolerance for implausible plotting, but there’s no sure way to know whether a show will strain our suspension of disbelief to the breaking point until we watch it. There has to be a better way.

The logical first step is to drill down and draw an additional distinction between procedurals with semi-plausible carnage and those in which it’s not clear where the mountain of corpses comes from. As implausible as the detective work on your favorite edition of CSI: Major Metropolitan Area might be, the steady stream of stiffs, at least, makes some sense in an urban environment. It’s when the procedural migrates to a more peaceful setting but keeps the same crime rate that the formula’s seams start to show.

In his piece, Andy invoked the murder rate in Cabot Cove, the outwardly sleepy setting of Murder, She Wrote, which BBC research revealed to be among the most dangerous (fictional) places on the planet. But that series has been off the air for almost two decades, so it’s high time we named a successor. Which of today’s procedurals boasts the most unrealistic rate of violent crime relative to what its setting would suggest?

Here’s a  candidate for Best in Body Count: Longmire, one of A&E’s most popular scripted shows (you know, the kind that’s not Duck Dynasty). Longmire’s second season wrapped last night, so we can close the encyclopedia-size case file on the series so far. If you scroll down, you’ll see all the spoilers. But let’s level with each other: You probably weren’t planning to watch every episode (or any episodes) of Longmire anyway. So these spoilers are, in a sense, a service.

The Absaroka we see on the screen — full of sweeping vistas, scenic sunsets, and strip clubs — isn’t real. And if it were, it wouldn’t be in Wyoming. Longmire is filmed in New Mexico, which — aside from the bodies, the protagonist’s name, a cameo by Ted Beneke, and the Mexican drug cartel connections — is all it has in common with Breaking Bad. But the origins of the idea of Absaroka are known to lie in Ucross, Wyoming, population 25, the home territory of Craig Johnson, author of the Walt Longmire mystery series. Ucross is in Sheridan County, in northern Wyoming; as one character says to Walt in the pilot, “That’s practically Montana.”

Sheridan County is considerably larger in surface area than Rhode Island, but it has only about 30,000 residents. According to the annual reports on crime in Wyoming available at the state’s Division of Criminal Investigation website — which make for riveting reading — there were five murders in Sheridan County from 1999 to 2012. Not five per year; five total, or an average of 0.36 per year. So let’s recap what we know about what Absaroka’s murder rate should look like:

“Been doin’ this as long as I have,” Walt says early on. “It gets so you know just about every face in Absaroka County.” What he doesn’t suspect is that many of those faces belong to murderers.

Walt Longmire, sheriff (Robert Taylor): Averse to even the simplest forms of technology and more rugged than the Marlboro Man, Longmire has a clear moral compass when it comes to police work but has spent most of his time smoldering with generic rage and dousing his inner demons with Rainier Beer since his wife was murdered (what else?) prior to the events of the pilot. Enjoys standing in doorways The Searchers–style.

Vic Moretti, deputy (Katee Sackhoff): Better known to all but the most hard-core Longmire fans as “Starbuck from Battlestar,” Moretti was a homicide detective in Philadelphia who made a misguided move to carve out a quieter life in rural Wyoming (note: might be redundant). “Because Wyoming is so small, crime is different,” Sackhoff said in an interview earlier this year. Yes, different. As in way, way worse.

Branch Connelly, deputy (Bailey Chase): In the span of two seasons, has slept with Walt’s daughter, opposed him in a campaign for sheriff, and flat-out fought him, physically. It’s really hard to get fired from this force.

“I remember when I could count the number of murders in this county on one hand. Two at most. Now I got a multibillion-dollar drug cartel right in my backyard.” —Walt Longmire

It’s not clear exactly how much time has elapsed between the pilot and the Season 2 finale, but a campaign for county sheriff spans almost the entire story arc. The weather goes from warm to wintry to warm again, so let’s call it a year (and that’s probably generous). There were 21 murders in all of Wyoming last year. Twenty-seven in Absaroka alone would be about 75 times the expected rate.

One more stat: Using the estimated population of Sheridan County in 2012 (30,176), 27 murders in Absaroka translates to 0.89 per 1,000 residents. The murder rate in the most murder-prone city in the country last year — Flint, Michigan — was 0.65 per 1,000, only 73 percent as high. On second thought, you might want to wait to move to Absaroka, at least until the residents realize they’re living in a postapocalyptic corner of society and real estate prices come down accordingly.

Given what we know about crime rates in Sheridan/Absaroka, murders in Longmire should be the kind of once-in-a-season, slow-motion, dramatic-music events reserved for finales.

What actually happens: Longmire’s first murder occurs 28 seconds into the pilot, when the victim discovers that sheep provide inadequate cover from snipers.

“I’ve seen this sort of thing before. The victim lost his bearings and suffocated after attempting to form snow angels upside down.”

There are bears in Wyoming, and for the right price they’re willing to do your dirty work for you. That price: a few pieces of flank steak draped over a tranquilized target. Results guaranteed to make the Ferg lose his lunch.

The Season 2 premiere features eight deaths, seven of them murders. Wayne Durrell, a serial killer being transferred between prisons, stages an escape at a roadside diner and, over the course of the episode, punches his serial killer card two or three times over by offing two FBI agents, a pair of firefighters, a cook, and one of his fellow convicts. Another con is killed while fleeing. Wayne finally meets his maker after Walt hits him in the head with a borrowed cell phone, though it’s ultimately the cold that kills him.

Catch of the day: a murdered member of a Mexican drug cartel.

“This is Wyoming. Everybody hears gunshots.” —Branch Connelly

How It Can All Make Sense, If You Want It To

We know why there are really so many murders in Longmire: because the crimes that would occur in a more realistic version of Absaroka County would be boring (although there might be something to that cartel connection). But if you want an explanation that’s consistent within the universe of the show, consider the inadequacy of the department tasked with protecting the county from cultists, cartels, and serial killers (not to mention members of organized crime).

Walt — as the script for every other episode takes great pains to point out — does not own a cell phone, so he’s hard to contact unless he happens to be with someone who does. The department is understaffed, with only four officers (that we know of) available to cover an enormous area. And the only computer in the office is operated by Matt Saracen’s grandmother. 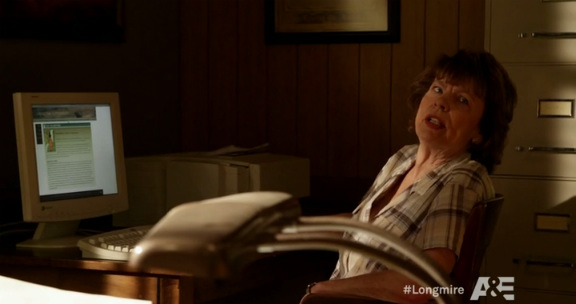 (Who keeps a typewriter around, just in case.) 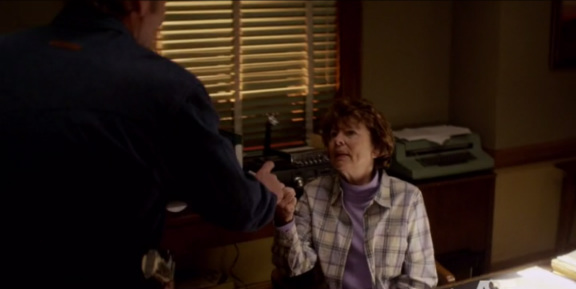 All of which is to say: If I had to attempt a murder, I’d want to attempt it in Absaroka County. It’s not surprising that every other criminal in the Northern Hemisphere has come to the same conclusion.

Not convinced that Absaroka County is the rightful successor to Cabot Cove? Suggest another candidate for the Body Count treatment in the comments below.