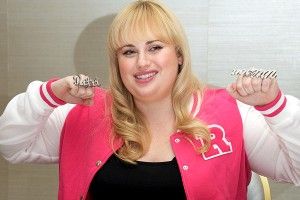 Australia’s Rebel Wilson first broke into American consciousness in Bridsemaids — via one fell “cascade of frozen peas on festering back tattoo” swoop — and, a scant year and a half later, she’s hosting the MTV Movie Awards. Boy, that certainly escalated quickly.

Not that I’m complaining — Rebel Wilson is hilarious, and hats off to MTV for rolling the dice with her perhaps a touch earlier than would traditionally make sense on the Arc of Fame and Celebrity and Having People Know Who You Are. She’s spent the time since Bridesmaids doing work in Bachelorette and What to Expect When You’re Expecting, but her showiest role to date was in Pitch Perfect, which Grantland already told you is the best movie of the year (more or less). She’s also booked a promising-sounding ABC series called Super Fun Night, a single-camera comedy that originally went to pilot as a multi-camera show at CBS (what a world!). As Deadline explains, it’s about three nerdy friends as they go about “their ‘funcomfortable’ quest to have ‘super fun’ every Friday night,” and it has already booked 30 Rock veteran John Riggi as showrunner/director/producer/guy who gets the whole wheat bagels.

Wilson, who’ll be hosting the show on April 14, joins surprisingly elite, unsurprisingly odd company. This thing has been hosted by Eddie Murphy and Will Smith and Samuel L. Jackson; it’s also been hosted by Jon Lovitz and Lindsay Lohan and Stifler. It’s a savvy move either way: If it works out and she’s hilarious, Wilson gets to accelerate the whole “worldwide fame” process. If she totally bombs, well, who cares, because no one really expects much from MTV award shows anyway.

We should be aware, though, that if the current trajectory holds, Rebel Wilson is set to eventually become Australia’s fourth most famous entertainer, right behind Natalie Imbruglia and right ahead of the guy from Men at Work.

Reality TV Podcast: The End of Jersey Shore, and the Finales of Survivor and The Challenge