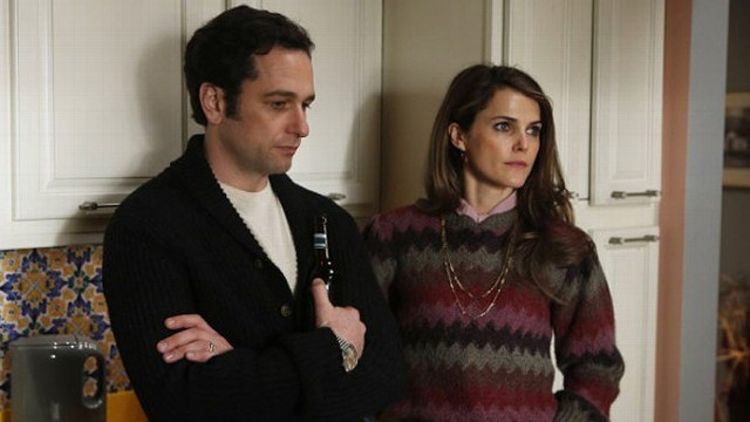 Everyone takes their work home with them. How could we not? Especially these days, when the demands of a high-maintenance boss can buzz in your pocket from miles away. But cell phones have only taken something universal and made it immediate. There’s never been an emotional car wash to run through on the commute home, no way to scrub the dozen little frustrations and indignities from your memory, no possibility of corralling the accrued stress and locking it in your cubicle overnight. The borders we try to construct in our daily lives to keep our families safe and our selves sane are ultimately as futile as the wire mesh and concrete the Soviets once used to divide a city. You can’t build a barrier big enough. Things have a tendency of spilling over.

The Americans grabs this conceit and flips it on its wig-wearing head. The Jenningses can’t help but take their home to work. How could they not? The slow thaw of their bedroom cold war has determined every action they’ve taken this season, for good or ill. We don’t know much about the couple’s first 15 years in America, but it’s hard not to get the sense that everything worked just fine: He loved her, she loved Gregory, and they both did what had to be done. But now the chipped samovar of their relationship is listing and leaking over everything they touch. We saw it in the pilot, when Philip’s unrequited passion caused him to strangle an asset they were meant to be protecting and again three weeks ago when Elizabeth’s suddenly kindled feelings for her husband ignited into pure, murderous rage at the handler who had so nearly ripped them apart. It wasn’t all bad, the professional effects of these domestic emotions. When President Reagan was shot and Al Haig was posturing, Elizabeth ultimately chose to listen to her heart, not propaganda, and ignore the thrum of expat paranoia. It was an unexpected flash of softness that allowed her to look at Philip with new eyes and, you know, in the process avert a nuclear holocaust.

But now all the sad dominoes of resentment, misplaced anger, and even worse-placed passion have tipped over, leaving nothing but chaos and death in their wake. “Safe House,” written by veteran Joshua Brand (co-creator of St. Elsewhere, I’ll Fly Away, and Northern Exposure), was the most brutal and surprising episode of The Americans to date, ripping up lives both figuratively and literally. I’m starting to sound like Pravda here, but it’s true: It’s remarkable the way every installment of this outstanding freshman season has built and improved on what’s come before. Strands that have been present from the beginning, lying pliant like Clark’s unmussable hairpiece, suddenly twisted and curled into each other in ways too natural to be anything other than intelligent design.

As the consequences of Philip and Elizabeth’s dissolution played out across the hour, I couldn’t help but think they were once again being manipulated by Grannie, their malevolent (mis)handler. But I was absolutely confident that we the audience were also being controlled by a master. The real-life CIA experience of Americans creator Joe Weisberg is getting a lot of credit for the show’s authenticity, but its real payoff is in the artful architecture of this season long op. A good spy plans ahead. But an exceptional one can make even improvisation feel expert.

But the focus on Weisberg’s CV also obscures the show’s most covert strength: that the family scenes are every bit as good as the espionage. The sad fried-chicken dinner where Philip and Elizabeth announced their separation to their unbelieving kids was heartbreaking. “You don’t just stop loving someone,” Paige yells. But what if you’ve only just started? Yet it was Henry who suffered the worst blow. At his age, everything is a zero-sum game: The Revolutionary War was about America winning; parents live together because they love each other and they love you. Keidrich Sellati is a strong young actor, able to communicate the burning confusion and resentment. (I didn’t even mind the inevitable appearance of a Rubik’s Cube! It wasn’t used as shorthand for the era but rather for the impossibility of lining things up they way you want them to be.) Henry’s done everything right — even when Paige almost got them in serious trouble the other week by doing something very wrong. And this is the thanks he gets? Dad in a motel and mom impulse-shopping in the ethnic-food aisle? It doesn’t seem fair because it’s not.

Once separated, the Jenningses almost immediately do something novel: They go undercover as themselves. The Beemans’ party — full of chips and dips wearing their worst Sunday sweaters — was The Americans at its Updike-ian best. The FBI agents plot an unsanctioned revenge killing while Stan’s wife swans around holding a wine goblet bigger than the cupola on St. Basil’s Cathedral. “I wasn’t spying,” she says to Elizabeth when confronting her about Philip’s living situation. And, sure, neighbors gossip, no matter if they’re yuppies or countries. But I couldn’t help but think Sandra was secretly pleased; only two weeks ago, she was the one whose crumbling marriage was publicly exposed. It’s no coincidence that power seems to shift as abruptly in this residential neighborhood as it does in the Rezidentura. The Jenningses manage to leave the party unscathed, but keeping up appearances can take a heavy toll. If Philip hadn’t been suffering, would Clark have taken the risk of spending the night with Martha? “Is this real?” she asks him, and if he squints, maybe he can pretend it’s his wife that wants him, not his source.

But it doesn’t much matter. The one night spent in character leaves everyone ill-prepared for the very real events that follow. Agent Amador, as we learned last week, has been doing some off-the-clock spying, as well, keeping tabs on his former girlfriend. But to see him confront Philip-as-Clark was still a shock, a sensation that quickly melted into horror as Amador’s knife slipped into his own gut. (Not the subtlest metaphor but an apt one for the way all these characters keep sabotaging themselves.) I wonder if some will take Amador’s snooping as proof that he was suspicious of Martha professionally. But I’m fairly certain it was just good, old-fashioned American jealousy that led to him bleeding out in one of suburban D.C.’s apparently endless supply of abandoned warehouses. All the bluster to Stan — about being “el lobo,” as “unencumbered as bedbugs in a flophouse” — was just projection, an image of the X-rated G-man Amador was desperate to be. But in off hours, he was someone else: a lonely guy, afraid of rejection, cruising the bars and drinking alone whether there was someone with him or not. It turns out, not all disguises require wigs.

He wasn’t lying about one thing, though: Shame was never an option. Amador doesn’t talk, not when Philip threatens him and not when Elizabeth flirts. When he does spill the beans, it’s too late — both to stop the aborted hit on Arkady and to save his own life. Maximiliano Hernandez did some wonderful work through the series, making a fringe character both memorable and strangely noble in his limited screen time. Still, as much as I enjoyed his presence from a story perspective — someone had to play hound dog to Stan’s terrier — I think I’m even more enthused about his absence. Amador was a suicidal sleeper agent in Joe Weisberg’s grand scheme; destined to die from the beginning, he was, in his bald and profane way, a sort of honeypot designed to capture the audience’s attention and leave us softened and ill-prepared for the body blows yet to come.

These past few weeks, as Stan has swum further and further out into the morally murky ocean of covert ops, Amador had served not only as his work pal but as his control: Stan will have one drink, Chris will have five; Beeman only sleeps with his source, Amador spreads it around. I’m not sure it was a friendship, exactly (although the smiley photo in Amador’s apartment suggested otherwise), but both men got something out of their partnership just the same: a chance to consider themselves through the eyes of a radically different peer. Without Amador to serve as a counterweight, the “bad” one to his straight-shooter, Stan sank straight to the bottom: hurting Nina, snatching not Arkady but his ineffectual jogging buddy, and then, at episode’s close, doing something far worse.

Eventually, “Safe House” seemed to suggest that who we are at home and who we are at work are both unsustainable fictions. We inevitably lose out to the truth. It’s, as Gaad put it, “biology.” Philip and Elizabeth considered marriage to be a convenient cover, but it defines them no matter where they live or who they screw. They’re permanently bound together, till death does them part. And Stan tried ferociously to live the way he always imagined himself: the loyal dog with the “soft mouth,” merely doing what he’s told in service of others. (This episode will inevitably be Noah Emmerich’s Emmy submission reel. His stillness has never been more terrifying.) But his time undercover with the neo-Nazis changed him, and his time with Amador changed him even more. As Amador himself told his now grieving partner in a flashback, there’s no “pause button” on any of this — no matter what Stan might think or what Elizabeth tells her kids about mom and dad’s struggles. “I didn’t want this to happen, but it happened,” Philip stammers at one point, knowing that all the people he thought of as pawns now have a very real chance of taking him off the board. “Things just got a little crazy, you know?” As the poor, burger-scarfing boychik learned when Stan went to get him a soda, lurking inside every soft mouth is a pair of deadly sharp teeth.

Five Questions on American Idol: Between a Rock Week and a Hard Place