The Americans, Season 1, Episode 8: The ‘Mutually Assured Destruction’ of an Arranged Spy Marriage 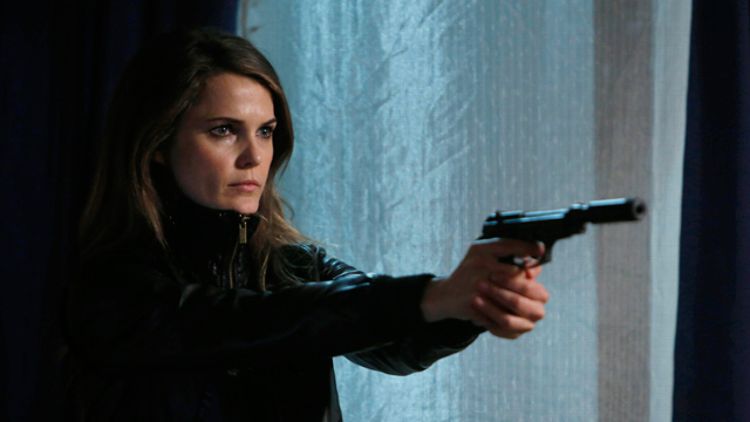 “The ’80s” as they exist in contemporary pop culture are a lot different from the ’80s as they were actually lived. This is one of the many things that The Americans has gotten right in its increasingly exceptional freshman season. There are no gratuitous shots of Rubik’s Cubes or Atari joysticks, no New Wave hair or yuppie handbooks. The pastels are kept to a minimum. The mom jeans are correctly worn only by moms. Instead what creator Joe Weisberg has given us is a damp and drab decade only just beginning. The colors are muted, the mood tense. In many ways it’s still the ’70s — the wide lapels, the wider sedans — but in many ways it could be any time at all. People of any era rarely notice the changes coming to disrupt them. We’re often too busy looking backward wondering how we got here to give a second thought to where it is we might be headed.

Over the course of its eight episodes, The Americans has been very clever in considering the Jenningses marriage in much the same way. It turns out the multiple flashbacks to the moment Philip and Elizabeth first met — in many ways, the moment the two actually became Philip and Elizabeth — weren’t merely there to help with the pilot’s rushed exposition. Rather, they helped establish one of this rich show’s many themes: Who we are at the beginning of a relationship, even one as intimate as marriage, is invariably very different from who we are at the middle or even the end. No, let me rephrase that: This is true especially in a relationship as intimate as marriage. Philip and Elizabeth have attempted multiple reboots: first under the glowering gaze of General Zhukov and then, 15 years later, under the watchful eyes of a slowly growing television audience. But the changes of the last few weeks, an unusually affecting, deeply romantic Glasnost in suburbia, are proving to be no match for the original sin of their pairing.

I found last night’s episode, “Mutually Assured Destruction,” to be desperately, almost painfully sad. Even though Philip and Elizabeth lie, cheat, and manipulate for a living, they can never forgive each other for forgetting where the office ends and home begins. It’s unfair, like blaming a child of divorce for commitment issues, but inevitable. And though the walls are closing in on all sides, a toxic cocktail of pride, stubbornness, and resentment continue to push them further apart. The title of the episode referred to the Jenningses, of course, not warring superpowers. If Philip or Elizabeth goes down — and not in the usual, information-pumping way — the other is doomed as well. They’ll die together, even if they insist on pretending to be apart.

Ironically, it’s this grim downward spiral that makes The Americans the most romantic show on television. I want Philip and Elizabeth to succeed so badly because, like some sort of couchbound couples therapist, I can see what they can’t, that a natural, deeply felt desire to commit is constantly overruled by the prime directive nurtured in each of them by the KGB: Never blow your emotional cover. This is especially true of Elizabeth. A sexual assault victim and, at many times in her life, a professional prop — not just sexually; it was her body that actually had to carry those two babies that helped establish their fake identities — she’s much more comfortable with her hackles up. Her punny banter with Philip the morning before Grannie got her revenge with an expertly detonated truth grenade was delightful, but also more than a little stagey. More so than Philip, Elizabeth sounded like an actress running lines, trying them out in her mouth to see how they felt. The truth is, every moment of a marriage, even a good one, is a miniature ballet of negotiation and performance. As with espionage, someone is always jerking the other around.

When Grannie feigned friendship while at the same time yanking on Elizabeth’s leash, it was absolutely a trap, but one that had the extra benefit of being true. Keri Russell was brilliant through the episode but never more so than when in the car, reacting to the news about Philip and Irina. Her eyes never watered, her jaw set. She reminded me of a boxer who only comes alive after taking the first punch. She’s one of those stubborn people who finds the hard stuff easier to handle, who thinks assuming the worst all the time makes it easier when it actually comes true. A few weeks ago she spoke of waking up every morning filled with intolerable dread, but when the bomb dropped last night she almost looked relieved.

But boy did I feel terrible for Philip. He’s always been in love with Elizabeth, but how exactly did she expect him to plié through the emotional minefield of being reunited with Irina? She was the last person he slept with free of any professional obligation — and last week, if my suspicions are correct, even that was no longer the case. He lied to Elizabeth about it because, as he confessed, he “didn’t want to lose” her. But I also think that both of them have gotten so good at pulling things off with little more than a few untruths, a little spirit gum, and some old-fashioned gumption that Philip figured he’d make his talents work for himself for once. It was risky, unfortunate freelancing, but it was also second nature. And it backfired in the worst possible way. Not only does Elizabeth coolly announce, “We will never do this,” but he finds himself face-to-breast with one of his real/fake wife’s trinkets as a passionate Martha tries to hump away years of bottled-up frustrations. It was here that Philip the actor finally started to slip; Clark’s detached pillow talk sounded like the minutes of a particularly dull CPA convention. Poor guy. He told Elizabeth he wants to “start over.” But you can only ever start once. Successful couples either deal with that honestly or are doomed to repeat their first mistakes over and over again.

Actually, everything last night was spinning around in similar circles. Gaad gives Beeman the keys to a state-sanctioned fuckpad to keep Nina sweet but, most likely, also to keep an impatient Beeman sweeter. She’s got to be playing him, right? “You cannot lie to everyone,” she whispers. “Too dangerous.” But as the Jenningses have demonstrated, you can lie to an awful lot of people. It was a telling and suspicious cutaway in the scene between Nina and Arkady. Was he really promoting her? Or busting her for the same stereo cash grab that got her entangled in Beeman’s net to begin with? Or was the previous Rezident’s dramatic exit all staged for her benefit, as many of you suggested in the comments? Either way, more and more it’s Beeman who appears to be stuck. He wants Nina to be safe, but if she’s exfiltrated away from the Reds, I can think of a part of him that’s going to be left uncomfortably blue. Noah Emmerich, so good at being still, proved even better when roiled by emotions. Did you note the look of helpless lust mixed with self-loathing that flashed across his face when he realized he could never really know if Nina was caressing him out of affection or obligation? And that maybe he didn’t care? It’s like she told him weeks ago: Americans are so black and white. Sorry, Stan. In Communist Russia, asset kisses you.

Gaad may be a frustrating boss, but at least he’s consistent. That can’t be said about the Russians who seem to have outsourced their spy apparatus to Time Warner Cable. “The German hitman will arrive sometime between 5 a.m. and April. Please make sure there’s a high-ranking nuclear scientist over the age of 18 at home to answer the door.” This was a fun case of the week, especially amid all the heavier stuff going on all around it; I liked the shotgun-wielding tyke, mainly because she established that Philip and Elizabeth actually could be worse parents if they tried. And the assassin himself, once our heroes finally tracked him down enjoying a room service meal and some light C-4, was an amusingly terrifying creation. He looked like an ill-shaped hunk of weisswurst, but at least he was well-mannered. I actually had visions of him joining the show’s rogue’s gallery in future seasons before his own bomb shredded him like so much sauerkraut. His rough end — and his posthumous explosion of at least one scientist and three G-men — was a neat, if gross, metaphor for what happens when the rigid Elizabeth starts to let her emotions get messy.

In the end, Philip attempts his aggressive racquetball strategy on his wife instead of on Stan Beeman: If she’s so committed to ending their commitment, then maybe she should just leave. “It’s a very modern country,” he says. “People get separated all the time.” He’s probably right that their fictional union has outlived its usefulness to everyone except each other and to the two kids who Elizabeth immediately goes to check on. I understand why she’s feeling betrayed, but there’s something screwy in her logic. “We didn’t take a vow to be unhappy,” she says, which is 100 percent true: They actually took a vow to infiltrate and destroy the American way of life! And what could be more American, particularly in 1981, the year the divorce rate hit an all-time high, than splitting up? (1981 was also the year before the Cure’s Pornography was released, but who cares with a music cue that great.) The problem with Philip’s seemingly simple solution is the same one that appears to be returning to bite Martha in the ass: Even when it’s over, it’s never truly over. Amador can’t let go because as soon as he does, there’s nothing holding the two of them together. Even if Martha’s mad at him, he still has some claim to her feelings. And around and around they all go.

With Will Ferrell's Help, Kristen Wiig Gets a Cable Access Show

Katy Perry and John Mayer Call It Quits ... and Other Horror Stories From This Week's Tabloids