The Americans Season 1, Episode 7: Only ‘Duty and Honor’ Are Real 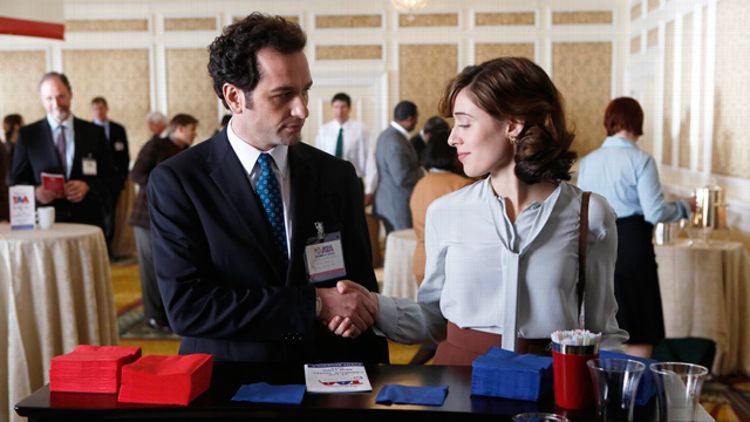 Nothing brings a couple closer together than distance. We’ve all been there, right? Last night’s fight still lingering in the air on the way to the train/bus/space station. The sour inevitability of the parting made even more bitter by a few final recriminations. Anything to fill the silence, or at least keep it at bay until the car door closes. Anger can be as effective as love when it comes to chaining two people together.

We saw it in full force last night on The Americans, too. In the moments before Philip walked to his train, he and Elizabeth sparred so convincingly you’d never know their original meet-cute was directed by a five-star Stalinist, not Nora Ephron. “It’s a mission, not a getaway,” Philip snaps. “Oh, you’re soooo sorry to go,” Elizabeth sneers. But as soon as he’s riding the rails, she’s mooning about their house like a housewife in a vintage laundry commercial, sniffing Philip’s shirts and making googly eyes at the phone. (The shirts, by the way, probably smell like a musky cocktail of witch hazel and caviar.) It helped — or hurt, depending — that said mission involved collaborating with Irina, the true believer Philip left behind on the other side of the Iron Curtain. That was her face on the photo he nervously tore up back in the pilot, just before his first, awkward tea time with Elizabeth. And it was her face, again, that loomed large over all of Elizabeth’s pining. There were years — entire decades — when she barely thought of Philip at all, when she preferred playing dress up with Gregory to playing house with her husband. But losing Philip to Irina now would be a defection worse than the one he rashly suggested back when Elizabeth’s rapist was still hog-tied in the trunk. Lovers and antagonists are nothing without their other halves.

Another thing that brings a couple closer together — other than being kidnapped, threatened, and tortured on a random, sunny Sunday — is seeing another couple struggling. I believe it was TMZ Tolstoy who once said: All happy families are alike in that they secretly get off on seeing unhappy families squirm. Compared to the fractured Beeman household, the Jenningses are the Waltons. (Don’t get the reference? Ask Agent Gaad.) I’m really enjoying Susan Misner as Sandra Beeman and was glad to see she’s been upped to a regular for Season 2. The anguish in her eyes nicely undercuts her Barbie-like appearance, as does the ease with which she reaches for the era-appropriate wine tumbler every time the phone rings. Or, for that matter, anytime her pissed-off son opens his mouth. (“Are you sure he still even lives here, Mom?” What do you think young Matthew is blasting on that Walkman of his? He’s about two months away from seeking refuge in this.) Sandra sounds more like her husband than she realizes when she says she can “judge a cover by its cover.” But her dissolving partnership only makes Elizabeth feel stronger in her own.

One thing “Duty and Honor” proved was that it’s not just an ability to work together that connects Philip and Elizabeth. There really is a heartbeat beneath all that makeup and latex. Still, the episode was a bit creakier than the nailbiting triumphs of the past few weeks. I found the tawdry destruction of the Polish dissident leader a little wifty and uncompelling — for a guy who worked with Soviets half of his life, he sure was an easy mark — though any opportunity to see Charles, the claret-swilling Commie puffball who combines the best attributes of Christopher Hitchens with the worst of Charlie Rose, is for the better. But it was good for us and educational for Philip to get a glimpse of what life could have been like with another partner. As Irina, Marina Squerciati had a charismatic, chilly sadness, though that could maybe be attributed to the long Quebec winters. She arrived to the travel convention unblemished, but the arranged beating she received from Philip seemed a fairly apt metaphor for her treatment these past 20 years. (Sidenote: Were all Russian spies undercover travel agents? If so, where, exactly, did all those commission fees go? Extra embalming liquid for Lenin’s tomb? I actually wanted a little more of Philip’s boisterous new buddy from Boston. But 42 minutes doesn’t leave too much room for many Cedar Rapids–like digressions.)

And I loved the possibility that there’s a mini-Misha frog-marching around Moscow somewhere; it suggests all sorts of possibilities for future seasons, when the Russian-born American is forced to confront his fully militarized, Russian-born son. But I loved it even more when Joshua Brand’s script suggested Irina was merely using the idea of a secret baby the same way Philip used that gray hooded sweatshirt: an easily discarded prop to get the job done. “Only duty and honor are real, Misha,” she says, before vanishing into the bowels of Grand Central. Was her offer of defection another trap set by the Politburo? Was that really Polish she was speaking? Is this a secure line? It’s probably a sign The Americans is doing everything right that I’m now more paranoid than the characters.

Elizabeth’s plaintive late-night phone call wasn’t the only reaching out and touching on her docket this week — although that, too, seemed almost uncomfortably real, the desire to say something important only when the long distance companies are charging you by the minute. While Philip was being himself, more or less, in the Big Apple, Elizabeth debuted a new leather look and claimed the protégé of the dead Dorwin as her own agent. The only problem is that Sanford Prince is a “degenerate” gambler. To get him indebted only to her, Elizabeth grabs a goombah’s bathing suit area like it was the arm of a slot machine and yanks until his eyes come up lucky sevens. Whatever aggression isn’t burned up by that little encounter spills over on a park bench rendezvous with the equally battered Claudia. There’s no small talk between these two; every word is a kidney punch. Granny references Anna Karenina and drops Elizabeth’s real name as if she were tugging on a leash. Still, at least she apologizes. “I’m sorry I didn’t kill you. That’s my apology,” Elizabeth fumes in return. (Keri Russell is so surprisingly good at being a badass. Has her voice always been this deep?) Alex Chapple films this scene wonderfully, highlighting the extreme difference in physicality between these two. Interestingly, it’s bearish Claudia whom the lithe Elizabeth terms “a snake,” suggesting Round 2 will be even dirtier than what we saw last week.

As we move into the second half of the season, The Americans is doing a wonderful job toying with the same commentary that’s run like a river (or, I guess, a corporate flowchart) through many of the great cable dramas. Be it the decaying city of Baltimore, the graying New Jersey mafia, or the Cold War–era KGB and FBI, again and again institutions betray and disappoint the individuals that serve them. Ideology falls away quickly; all that you’ve got left is what’s in front of your face. Perhaps that’s why Philip’s absence made Elizabeth’s heart grow fond for the first time; why she’s now so willing to try to transform their relationship into something “real.” It’s also why Beeman, estranged from his family, seeks solace in Nina, his personal Russian nesting doll. She talks a good game about seeing things in shades of gray — unlike those bull-headed Americans — but as far as I can tell she sees everything only in terms of survival. Stan will do anything to help her now that she’s “had [him] for breakfast,” (I suppose she had previously devoured the Rezident as more of a midnight snack) including possibly risking his own life since Gaad has made it absolutely clear his priorities don’t involve saving the beautiful neck of one of his sources.

It’s a central, oxymoronic part of being an American, this idea that we’re all rugged individuals but simultaneously somehow bound up together into something greater. It’s a nice sentiment in textbooks and songs, something we can tell ourselves during the Olympics or the finals of The Voice. But so far on this show it’s only the hive-minded communists who have a realistic grip on where things actually stand: There is no “us,” it’s always only “them.” Even adrift in the overwhelming murk of companies, countries, and causes, it’s still every man for himself. Is that what Philip is thinking when, at episode’s end, he draws Elizabeth closer to him with the kindness of a lie? It’s telling that in that moment, only his eyes are fully open.

Veronica Mars Made Its $2 Million Goal in One Day; How Was YOUR Wednesday?

Prince Harry Is Crushin' on Jennifer Lawrence ... and Other Absurdities From This Week's Tabloids