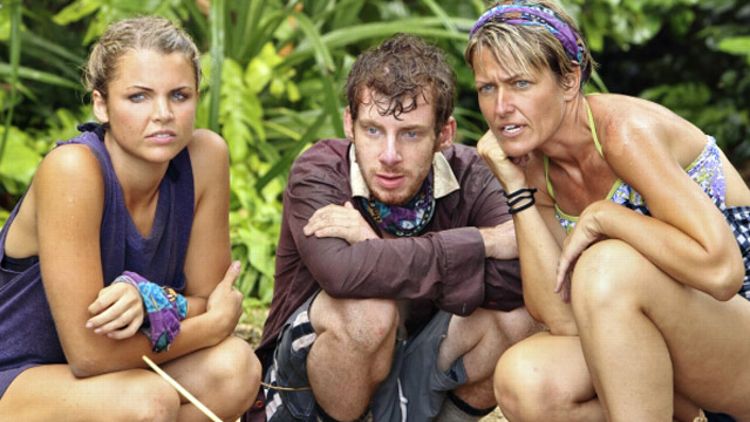 This season of Survivor is so Mean Girls.

Over at Gota beach, the fans return from tribal council minus Hot Hope, their nerves frayed. Eddie and Reynold are all that remain of the popular alliance, and they can’t wrap their brains around Hot Hope’s sexy torch having been snuffed because she was just too threateningly attractive. “Didn’t you say you wanted the strongest team possible?” Eddie asks Sherri, of the Big Hairy Wildebeest People alliance, because Weak Laura is still kicking around, shivering on a log trying to extract physical strength from the moisture particles in the air. “YES, I SAID THAT! YES, I SAID THAT!” Sherri growls defensively, maybe to overcompensate for always defending Shamar even as he snoozes at camp more than a hibernating teenager. Reynold tells the group that he has “absolutely no respect” for any of them, which he’s allowed to say because he’s got the immunity idol, which also doubles as a jerk trophy.

Meanwhile, at Bikal, an eagle (either bald or shaggy, impossible to tell from so far away) coasts through the air and lands on a tree; obviously this is a metaphor for Special Agent Phillip Sheppard, who has recognized the need to “contain the threat” of paranoid Lil’ Hantz by including him in the very welcoming Stealth R Us alliance, “with all the rights and privileges” contained therein, and dubbing him “The Conqueror.” Unfortunately, Hantz was burned by his initial exclusion, and after “nine days of kissing butt” he’s not so sure he wants to be an elite member of Sheppard’s ragtag crew. He fakes that he’s down to join the alliance but then secretly chuckles to camera that though “Phillip is supposed to be able to discern who’s lying to him,” he’s bought into Lil’ Hantz’s fib. Andrea, meanwhile, is becoming jealous that Phillip is doling out names to everyone — “So, what, are we supposed to give Brenda a name?” Quick cut and the answer is yes, Brenda is now also known as Serenity.

Thank you, island gods, for giving us two separate challenges in this episode. The reward in the first challenge is a day with your own personal bushman, Tata. Tata is 4 feet tall, 60 pounds, has a chicken and some produce, and likes to mingle with the Survivor women. To win this sociable small man who will improve “every aspect of your lives,” the castaways must transport the members of their tribe on a series of platforms to a final platform propped on a post; they must all then pile their emaciated bodies on the final platform and stand there until the count of three. You remember this challenge because it’s fun and very awkward, and you curl your digits inward because all you can think about is seven people standing on your pinkie toes and crushing your joints beneath their collective weight.

Cochran sits out for the favorites, so it’s even more noticeable when Laura splashes around in the water and exhibits some trepidation when trying to hop from platform to platform — these tribes are pretty strong, so the weak ones are increasingly hard to miss. Still, it’s a close one. Shamar makes the interesting decision to become one with the platform and instruct the girls to “get on top of” him, which, along with Laura’s pokiness, may have been the factor that leads the fans to lose the challenge. Unfortunately, when Jeff calls it, Shamar doesn’t quite understand what’s going on and cheers “That’s what I’m talkin’ about!” until Phillip and Probst gently inform him that the favorites are the victors. No Tata for you, Shamar. Not this time.

Bikal seem to enjoy Tata’s services as an entertainer more than they do his ability to teach them how to steam rice in the hollow cylinder of bamboo. That’s a nice party trick, but they’ve got a pot. He “got his bump and grind on” with the women of Bikal, Cochran observed, and seemed to sort of dither around with the tethers of the shelter; he brought some food, sure. But what Tata really did was to make everyone feel like a winner. Andrea noticed that a Day of Tata was something that Gota “probably really could use,” morale-wise, after a few weeks in the loser’s seat. At this point, Bikal has the fishing gear, the comfort items, and the numbers while Gota has … sleepy Shamar and a man with a beard in which you could hide a litter of puppies.

Shamar’s morale is at an all-time low, and he decides that the only way he’s not going to quit is if his tribe members start bringing him rice scoop room service. This, understandably, alienates everyone — even Sherri, who reluctantly brings Shamar his food while griping that she “[doesn’t] even wait on [her] husband.” Laura’s even more peeved, calling Shamar a big baby, but that could be because she knows she’s in trouble if he doesn’t bear the big pariah’s X on his back this week. Incredibly, Shamar manages to sustain an eyeball injury while lolling about in his sleep-cave, and while everyone else is getting eaten alive by rats and scraped up by brittle hurricane winds, Shamar’s face is becoming this e___x. In the morning, Shamar is rocking back and forth — Michael speculates that “he’s meditating” and trying to find an elusive “happy place” — and soon the medics are summoned to inspect the offending eye. Shamar’s head is now nowhere near in the game, he’s completely preoccupied with “want[ing his] eye fixed a little bit.” I think he’s relieved to hear that the eye is unfixable on the island and needs mainland care to repair a divot in his cornea. I understand that this is a pretty serious injury because eyes are like peeled grapes and vision is very precious, but yawwwwn. It’s the most anticlimactic injury to ever take out a Survivor in the history of the show. Shamar cries, probably mostly from embarrassment, and everyone bids him good-bye as Reynold admits that he assumed Shamar was faking and though this has been disproven, Shamar was still “disrespectful and lazy.”

Shamar’s absence is noted by kindly Dawn at the immunity challenge, further cementing her as a person I am very concerned about when Lil’ Hantz becomes a human tornado of insanity next week and throws rice everywhere as seen in the preview. The immunity challenge involves the castaways taking turns climbing to the top of a platform, jumping off while breaking a tile to release a key, then swimming back to shore. Once they’ve gotten all five keys, they can unlock a chest to grab sandbags that they then hurl at blocks until they knock them all down. The first tribe to demolish all of its blocks wins immunity. Corinne and Dawn sit this one out for the favorites. Erik and Sherri square off in the first round, but because Sherri only nicks her tile, she puts the fans at a huge disadvantage because she has to climb back up and try again. Eddie hustles like nobody’s business and makes up some time, but the favorites already have one lock open by the time Michael returns with the fans’ final key. Reynold and Laura start working on the locks for the fans, and while Sheppard houses those locks like the Lock Specialist he is, poor Laura struggles. Again. Reynold and Phillip toss their sandbags against the clock but Phillip is the victor, and I think I may have caught Reynold crying a little bit at the loss. Maybe it was sweat, but I would like to think it was tears, so that’s how I’m writing it and that’s how it will stay.

The scramble begins at Gota with a little sadfest over losing two people in one day after Shamar quit. Matt is particularly bummed, and approaches his fellow floater Michael about getting rid of Laura because of her crap performance in both challenges. Michael expresses concern about weakening their alliance, but Matt’s unstoppable. He tells Reynold to play his idol and that he’ll be voting for Laura; Reynold doesn’t want to waste the idol and struggles with his decision as an image of a monkey contemplating the meaning of life on a giant rock in the ocean floats by to remind us that the universe is complex. Matt goes a-courting to Sherri, the unofficial Wildebeest Alliance leader, and attempts to convince her to oust Laura. Sherri is hesitant because she, too, sucked at the immunity challenge. She ponders whether this culling of the weak will mean that the men pit themselves against the women. Of course, this would be a smart move for Matt and Michael because the women currently have the numbers, and if they start getting gender-paranoid, they’re going to flip and come after the two least loyal among them.

At tribal council, Jeff asks the group about the landscape of life post-Shamar. Sherri confesses, after a pause, that she “miss[es] him as part of the alliance,” so I guess she didn’t really like him as much as she tried to convince herself she did. Laura muses that this vote will make it clear whether people are prioritizing loyalty over strength or vice versa. Obviously, she makes a case for the value of loyalty, but Reynold disagrees: “We’re losing, losing, losing.” Jeff mentions that Reynold almost brought them back from behind in the challenge, but Sherri points out that they’re at tribal, so who really cares if he was the MVP of the losers? Eddie, who has been on the outs for being cocky since day one, casts aside diplomacy once more to peg Laura and Sherri as the weakest members of the team (he doesn’t rag on Forgotten Julia, but that could be because he’s still not sure who she is, and neither are we). Laura optimistically points to “twists in the game” that make it impossible to “predict the future,” but a green snake tongues the air nearby as if to say, “Shhhhhhut up, Laura. I’m the ccccccccynical ssssssnake.” Before the votes are read, Reynold plays his idol, but the group unanimously votes off Laura.

Laura exits with little fanfare, just the traditional Survivor-is-hard, “you don’t feel the hunger, you don’t feel the thirst in your mouth” song and dance that everyone is contractually obligated to perform unless they decide to go rogue like Jeff Kent.

Next week! A shot of a cobra lets us know that, for real, this is the episode where the shit hits the fan and the rice hits the ground. Probst’s voice-over intones, “Every season, there is one moment that no one will ever forget.” How do you know it’s this upcoming episode? I’ll tell you: Lil’ Hantz booming “I AM THE AUTHOR OF MY FATE, BUDDY” and flipping chairs because he is LOCO. Hantz is so Freddy Quell. Who will step in and become his Lancaster Dodd? Is Probst Dodd? Is Dodd dead? Is God dead? Is everyone going to have to pick the sand out of the rice and eat it anyway? Time will tell, and if you don’t watch, time will tell me and then I’ll tell you and it will be a game of Time Telephone.