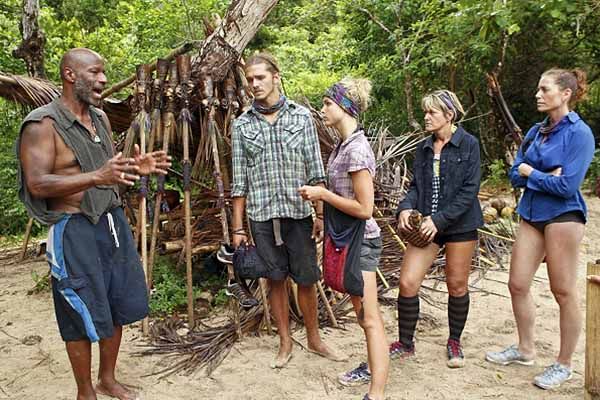 Last week’s Survivor was a little bit too crazy, so this week’s episode was all about getting everyone’s minds back in the game and off the Loco Hantz meltdown and sand-sullied rice. Life with Brandon was so hard that the favorites didn’t have time to strategize — everyone was just focused on staying alive and blending in with the sand like chameleons so as not to get struck in the head with some lil’ fists from Lil’ Hantz. Returning from the forfeited immunity challenge, the members of Bikal are relieved to be rid of the “traitor” whose behavior Corinne calls “right up there with Mel Gibson and every other crazy person,” but Brandon’s exit outburst also tipped Gota off to the discord on the favorites’ team. Special Agent Phillip Sheppard seems like he’s still got the jazzy adrenaline pumping through his body from battling with Brandon, and he hatches the bright idea to get rid of Corinne as soon as he gets the opportunity.

The fans are glad just to have avoided another tribal council, and Reynold decides to focus his energy on trying to hang on until “something shifts in the game” because he and Eddie are next on the chopping block unless the tribes get shuffled or merged. They only have one idol between them, after all. Of course, that kind of sentiment just makes it clearer that a shake-up is necessary to prevent this predictable outcome from occurring, so Probst instructs everyone to drop their buffs and grab the old painty eggs to determine new Gota and Bikal tribes. The new Bikal is now Longbeard Matt, Cochran, Corinne, Forgotten Julia, Dawn, Sheppard, and Michael, leaving Gota with a physically superior team composed of Sherri, Andrea, Eddie, Malcolm, Brenda, Erik, and Reynold. The favorites have the advantage on both sides, but at least we’re not going to see the same group of people get pummeled every single challenge. As Cochran says, “The game has started anew.”

Reynold is pumped, obviously, to be on the same team as Bro Eddie, and everyone has new rice and flints. Eddie, always modest, is thrilled that their team is good-looking (bless him), but that superficial looxist mentality leads him to join Reynold in stupidly dissing Sherri to the rest of their new tribe. You’re supposed to save that for later, when you learn whom to trust, ya dang heels! Erik, wiser than he was the last time he was on Survivor, tells the cameraperson that this immediate smack-talking raises red flags for him; Sherri, meanwhile, confides in Brenda and Andrea that she’s gunning for Eddie, which raises the same red flags for Andrea. A panting mammal interstitial helps you digest this information: It’s still fans versus favorites, because the fans haven’t yet learned when to keep their mouths shut. Andrea and Malcolm meet up in the woods to dish about the divide between Sherri and the bros, and Andrea mentions that she had a dream that Malcolm has the immunity idol. He does, but fibs convincingly (“I’m an accomplished liar when it comes to women”) even though the magical totem is sending thought-piercing rays into Andrea’s head from two inches away. I think Malcolm has a distinct advantage in the fact that he’s played the game before, but nobody knows who he is (his season hadn’t aired when Caramoan was taped, as you might recall). He has the experience without the stigma.

Over on new Bikal, Corinne is struggling to contain her excitement over having a gay man in her midst. She has a “special place in [her] heart” for gays and desperately wants to touch and talk to this incredible being, but she’s afraid that it would alienate her alliance. What? Really? Becoming obsessed with someone because of their sexual preference and using that as the sole basis of your Survivor game? Why would that be weird or make anyone uncomfortable? Sheppard is still in overdrive, and he’s cornering Forgotten Julia to try to get her to flip on her fellow fans. He thinks she’s smart (though “not college-educated, like myself”) and ignores the fact that the favorites are already the majority, so working her over is a needless gamble. Corinne objects to this and privately calls Sheppard “the worst federal agent I’ve ever met” who may be responsible for “our country [being] such a mess.” She tells Dawn that Sheppard needs “a warm glass of shut the hell up,” which is stupid because shut the hell up is always served ice cold. Dawn reacts with a strong jaw and assorted withering looks and decides they can’t leave Phillip alone or he’ll keep running his turbomouth until he inevitably screws things up for all of them. A spider eats a stick bug, and two monkeys examine each other’s bodies. A sting ray has a face.

It’s immunity time, and this one is simple: Two members from each team square off in a race into the ocean to retrieve crates until they’ve got six back at shore. Then the crates have to be puzzled ’n’ stacked into a formation so their faces read FANS VS. FAVORITES. Sheppard and Forgotten Julia are up against Eddie and Erik, who cream them. The slaughter continues mercilessly as Bikal sends Sheppard into the sea three times (Probst calls it “a strange strategy,” which it certainly is), taking 11 years off his life and further sabotaging what was clearly a lost cause from the beginning. Gota has no trouble stacking their crates with Malcolm in charge (he’s great at puzzles), but Forgotten Julia can’t boss people around efficiently and Sheppard and Corinne become antsy with her and each other. When the win is called for Bikal, Sheppard agrees with Probst that they had a pathetic performance, and Dawn cries (again) as Longbeard Matt lets the sorrow wash over him from his slumped perch on a crate.

When they get back to camp, Phillip attempts to rally spirits with a misguided speech: Sometimes the better team wins (not helpful to the losing, lesser team), everyone gave 110 percent, and on and on and on and on and on. Babies are born, grow up, graduate from college, etc. Corinne’s infinite patience is wearing pretty thin, and she now places Sheppard beyond “the baby on the plane [with] diarrhea” on the annoyance spectrum. After the pause where he felt the appreciative applause should have happened, Sheppard zooms over to Michael and Longbeard to try to give them future vouchers into Stealth R Us: It’s easy. If someone in Sheppard’s alliance tells Longbeard or Michael to do something, they just need to do it. Unless Sheppard vetoes the action. Submit to the Stealth! Then they can redeem their nicknames and become part of the least exclusive clique on the island. Longbeard manages to “keep a straight face,” though nobody would know it if he didn’t because his whole face looks like a braid woven by Laura Ingalls Wilder to protect all of humanity from the cold prairie winter. Forgotten Julia also approaches the two rogue floaters and suggests that they send Dawn home. DAWN? Leave Dawn alone, whatsyourface. Longbeard and Michael pretend to agree, but then they’re courted by Cochran and Corinne. Longbeard tells them that he doesn’t have the idol, just … in case they were wondering, which sets off Cochran’s desperation meter. Because they’re suddenly so popular, Longbeard and Michael have become a feared “power couple,” and Cochran starts to think that it might be a wise move to send one of them packing and break the force field of friendship. He brings this idea to Sheppard, Corinne, and Dawn, but Sheppard and Corinne are still stuck on the idea of pushing Forgotten Julia out of the narrative because she doesn’t bring anything to the table other than a “nasally voice.” Corinne is glad that “[her] gay got saved,” but Cochran makes a good point. Boring, Forgotten Julia is no threat to anybody as long as they don’t feature her as a star player in challenges. A duo is much more dangerous.

At tribal, Longbeard says that he’s “stoked” with his new team, because he was a fan of the favorites he’s now competing with. Way to butter them up, Longbeard! He, Michael, and Forgotten Julia know that it’s one of them who’s going home, and Longbeard isn’t too proud to try to appeal to the vanity of teammates like Sheppard, for whom that kind of thing goes a long way. Cochran calls the opposition “the bold and the beautiful group” and maintains that he could never penetrate their muscular, blond bond. Corinne is freaking out about the immunity idol and trying not to let any pertinent information out into the dangerous, ambient, intimate lighting of tribal council; Sheppard is wary, too, and advises anybody with an idol to play it. Despite two votes for Forgotten Julia and one for Dawn, Longbeard is snuffed out of the game. It’s too bad because I liked Longbeard, and I think he and Michael could’ve gone pretty far together if they’d bothered to conceal their allegiance. Probst’s parting words to the tribe are that they have to start winning immunity challenges (groundbreaking!) or Michael and Julia are toast. Longbeard leaves with his dignity intact, having not been judged for being “too gnarly” due to his facial hair and tattoos, and with no regrets.

NEXT WEEK: Malcolm “take[s] control of the game,” and Sheppard blows some smoke up the boom mic about his impressive upper-body strength while contradictory evidence from a challenge is presented at the same time. Sheppard is so Shakespearean: kind of like Malvolio in the yellow stockings and cross garters. If I were an evil mastermind on Bikal, I’d be playing Phillip like a fiddle. He just seems so easy to manipulate (in all likelihood because he’s probably a straightforward, honest person), plus he’s a very effective mouthpiece: Tell Phillip a planted secret, and just sit back while he disseminates the information exactly where you tell him not to. I hope that someone takes advantage of this soon, but they’d have to be smooth because Phillip is easy to send into paranoid mode. Maybe Sherri will be up to the challenge if they both make it to the merge; she’s good at figuring people out. Let’s hope that the strategic, whispery, double-talking part of this season of Survivor has arrived. Either way, nobody’s sleeping with one eye open waiting to catch Hantz peeing in the bean bag, and that’s a good thing. Exposed eyeballs don’t hold up well in these kinds of conditions (miss you, Shamar).

Katy Perry and John Mayer Call It Quits ... and Other Horror Stories From This Week's Tabloids