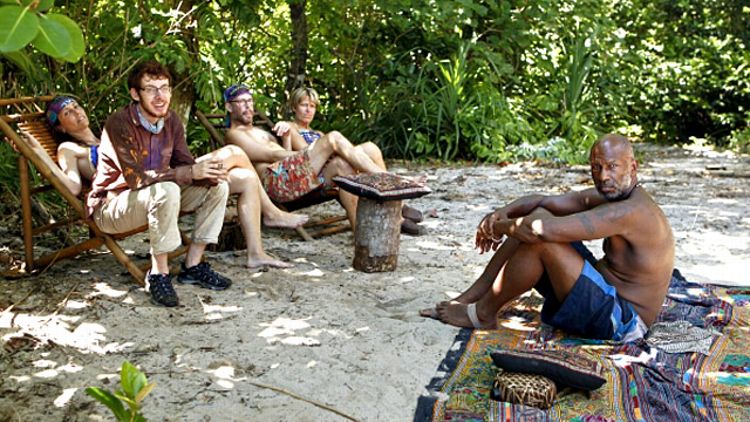 After writing about the Koh-Lanta deaths and then talking about the assorted perils of reality shows on the Girls in Hoodies podcast, I was feeling kind of mixed on the whole Survivor thing this week. It isn’t that I don’t still love Survivor, but I felt like taking a little bit of a break from reality TV for a bit to just cleanse my soul, watch Room 237 a thousand more times, and think about The Running Man. But I’m devoted; conflicted, but devoted. I still feel better about watching Survivor than I do about The Real Housewives of Beverly Hills two-part reunion (which I also watched). It’s tempting to say I kept up with these shows in the wake of events that maybe should have deterred me because I write or talk about them for my job, but I think I would have watched them anyway. What does it mean? What does it all mean??! It doesn’t matter. Room 237 cost me seven dollars. Watching people throw up insect larvae is free.

Remember Julia? Of course not. Anyway, she’s gone now. It’s Night 19 at Bikal, and everyone is glad Michael’s still kicking around, Corinne most of all. She “made sure [she] got the gay — it was beautiful.” Who really feels like laying into Corinne week after week as she continues to make these stupid comments about this man as if he’s a cute vintage ashtray she bought at a thrift store and is designing her living room around? Not me.

Moving on: Special Agent Phillip Sheppard huddles up with Corinne and Dawn to inform them that he threw the last immunity challenge, which both ladies know is a bunch of B.S. Corinne informs him that he could have told them — “it would have been OK” — but Sheppard says that he knew they would want him to go ahead and do it. Corinne has never been a Sheppard fan and this kind of talk does nothing to change her opinion — she wants him out. Meanwhile, Dawn takes a solo stroll to weep by the well because she’s got six kids and really needs the million bucks. Wouldn’t it be great if Dawn won this thing? I have no reason to believe she will, but wouldn’t it be kind of nice, like a warm fuzzy from Mark Burnett? She’s reached the critical point in the game where she needs to become a “decision-maker,” a lesson she learned in her last season when Cochran flipped on her and her “game went to heck.”

A boat approaches the Gota beach, alerting dippy-seeming Erik that “something awesome is about to happen.” The boat brought a note that tells everyone to pack up their belongings and gave them the key to their new home. Andrea knows what’s up: “It’s merge time, baby!” Everyone is excited to test out their old, pre-shake-up alliances and to have more people around to dilute the fact they’re getting pretty sick of each other. The new tribe opens a picnic basket containing green buffs, food, and wine. “Dawn goes into mom mode,” quips Michael, “cutting the cheese … literally cutting the cheese.” Come on, man. That’s not what moms are about. #Respectformoms.

The tribe needs a name, rejecting “Stanley” in favor of Malcolm’s suggestion of Enil Edam, which they think means “new beginning” but is actually Malcolm’s mom’s name spelled backward. Corinne tells the camera it’s the dumbest name ever and has “too many syllables,” and while both of those things are true, she doesn’t bother to rock the boat by pressing the issue publicly. Sheppard pulls Andrea aside to suggest they reconfigure their alliance so that it consists of the two of them plus Dawn and Cochran. He advises her to “pretend [she’s] Boston Rob” when she strategizes herself to sleep and warns her about the “powerful men” (Malcolm, Erik, Reynold, and Eddie — who is currently rocking a Bradley Cooper–esque perm thing) who need to get weeded out. Andrea feels secure in her alliance-within-an-alliance, but she senses the scramble-vibes that hover in the air like gnats after a merge and knows anything is still possible. Corinne and Malcolm get together to conspire about forming their own alliance with Reynold, Eddie, Erik, and Michael. This makes a “fragile” six-person crew, and in order to get through the first vote and gain some security, they decide to try to ditch Sherri first. Corinne’s hungry for a blindside, and for whatever reason Sherri seems to have started to rub the rest of the group the wrong way.

Enil Edam has a pretty boss flag, by the way. Michael’s name is painted over the water, all lonely and separate from everyone else’s names, and it has an exclamation point after it: Michael! Five bucks says that’s Corinne’s handiwork. There’s also a picture of a helicopter and a nice sunset, which is pretty ambitious.

Cochran retrieves a foreshadowing tree-mail that makes it pretty clear the immunity challenge will involve eating things. At first some of the tribe members seem psyched — food! — but then they start to think about it, and they realize they’re going to be eating things that are sort of food, but not really food. Eating bugs and guts is Reynold’s “one weakness” and he’s afraid he’ll tank, but Eddie is more concerned with the effects of revealing having eaten “a cow’s dick or something” to future dates. Cochran is much more open-minded romantically, and he thinks a cow’s dick dinner may “make [him] seem more dangerous” and improve his romantic prospects.

When everyone arrives on their little green carpet for the immunity challenge, the idol statue is replaced by a necklace and Jeff Probst tells everyone that in this challenge (“a Survivor classic”), they’ll be eating items the locals eat “every day.” On another planet, a group of aliens is huddled over TLC’s My Strange Addiction and planning their Survivor: Earth barf challenge. “Oh, look that that,” says Alien Producer no. 1 to Alien Producer no. 2. “On earth they’re eating cat hair and other people’s blood and nails and rocks and spiders every day. This is the native cuisine of Hollywood, Los Angeles, Earth!” All of the tribe members look appalled: Reynold is completely gray.

The first round is Andrea, Sherri, Corinne, Erik, Eddie, and Malcolm and the cloche is lifted to reveal a couple of big, fat, active insect larvae for each. Probst reminisces that this kind of thing takes him back to Season 1. Ah, memories. Andrea is a total champ and swallows her grubs in no time, followed by Malcolm and Eddie, who beats Sherri by a hair. Sherri and Corinne vomit, but not gratuitously, while Erik doesn’t seem to totally absorb the fact he doesn’t actually have to finish what’s in his mouth. The second round’s contestants — Reynold, Brenda, Sheppard, Michael, Cochran, and Dawn — have a much harder task ahead of them than the first group, because they’ve just watched a bunch of people gagging and hurling into the sand. Dawn is raring to go and doesn’t want to wait for her cue. Probst has to gently talk her down from stuffing her mouth full of crawling things and roaring like a human volcano. When the dinner bell chimes, she works those bugs so hard it kills me to see Cochran, Sheppard, and Michael best her.

The third round’s cuisine is shipworms — they’re in the clam fam, but all you need to know is they look like sea-creature shoelaces coated in a lot of spit — and, disgustingly, they can be slurped up like spaghetti. Malcolm and Eddie finish within nanoseconds of each other, with Cochran swallowing next. Andrea puts in a great effort with her worms and wears the badge of a “shipworm mustache,” which will go into Urban Dictionary as soon as I’m done writing this recap with another meaning assigned to it.

Next, Eddie, Cochran, and Malcolm attack the infamous balut (bird embryos so close to hatch-status they’d probably look cute after five minutes under a hair dryer) and looky here: Cochran snarfs that thing. Eddie spews, trying to hold the rejected contents of his mouth in with his fingers, but Malcolm soldiers forth and faces off against Cochran in the final (Malcolm calls Cochran “a ginger Kobayashi,” but I think his coloring is more strawberry lemonade). The final course knocks at the door. Hey, what’s up, pig brains? Cochran proclaims it bacon and wolfs it down, no problem. He celebrates, as he should. And so, unsurprisingly, Cochran has won with his brains.

After they return to camp, Cochran parades around, indulging in his “obnoxious victory” celebration because everyone knows this is his one brief moment in the sun. Malcolm confirms this by telling the camera he’s happy for Cochran, who can now “check one off the bucket list,” but he’s not planning to keep him around for very long. Sheppard and Corinne get together to figure out whom to ax next, getting into a debate because Sheppard wants to split the vote between Eddie and Reynold (the “most prudent thing to do”), and Corinne’s still hanging onto the hope that she can get rid of Sherri, suggesting they split the following vote instead. Sheppard steamrollers her, which gets Corinne hot over his “utter disregard” for other people’s opinions. She continues her anti-Sherri campaign to Andrea, Dawn, and Cochran, slipping in a few casual disses in Sheppard’s direction too (she’s more direct when she approaches Reynold and Eddie, telling them she wants to “throat punch him every day”). Not thuper thmart, I think, because now Cochran’s alarm buzzers are going off that Corinne could disrupt their alliance; however, it’s not as dumb as Corinne’s next move, which is to tell Dawn about her plans to disobey the Special Agent’s vote commands.

Dawn spreads the word among her alliance, which Cochran describes as “a sobering situation … because she doesn’t have a strategic bone in her body.” No more Mr. Nice Dawn. By the time this information reaches Sheppard, everyone in their alliance agrees the best idea is to blindside Corinne. Sheppard is relieved his ragtag gang of nicknamed misfits rallied around him (“How dare her try to get me out of the game!”) and tells Sherri to vote for Corinne at tribal in order to “change her fate.” Sherri doesn’t like Sheppard, but I think she has a sense her popularity meter is dipping into the red. They need one more vote, so “Erik the ice-cream scooper” is recruited, which he thinks is “so cool” even if he has no clue what he’s going to do. And I wish I knew what to do with the shot of a red zillipede that precedes tribal. Maybe frame it. And maybe burn it after I frame it.

The first tribal council postmerge covers the erstwhile helpless plight of the fans, which still seems grim but for the fact there are now “four more chess pieces to play with.” Corinne considers the fact that “everybody’s got a plan until you get punched in the face,” but Reynold responds to Probst’s questions with claims that shocking tribal moments are “on the way” but still bubbling to the surface like shipworms in a haunted graveyard (I added that). Oh? Is that so? We got Sherri on lock? REALLY? Because though Corinne smugly votes for Sherri with a comment about how she didn’t come on Survivor because she was taking “friend applications,” as the votes are read and Corinne starts racking up paper scraps, it certainly seems like someone is shocked. Corinne starts gasping when she ties with Sherri, then morphs into a rare Giant Island Frownybear as she is sent marching off to her getaway boat. No jury for Corinne. Her exit interview is a disappointing 2/10 on the bitterness scale, because although she didn’t like anybody other than Malcolm and Magical Gay Michael, she will always have the memories of blah blah blah awesome paradise.