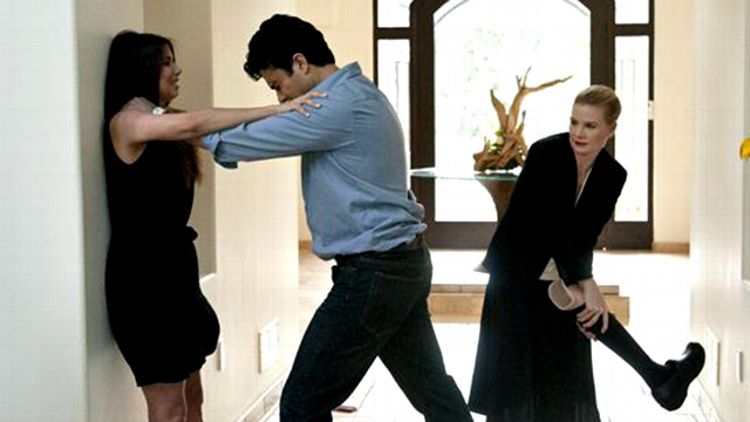 My dad was in town last weekend. We watched Episode 4 together. His commentary never extended beyond him shouting mean things in Spanish at the television. Still, I enjoyed the time together. I called my mom on the Thursday after the show and she mentioned to me that he’d mentioned the show to her. I was excited because I’d been trying to ask her how the show’s larger meaning made her feel as a Latina, or if she thought the show even had a larger meaning. She said she didn’t know, but that my dad told her someone should make a movie about a tornado that throws a bunch of maids who eat people around Los Angeles, and that they should call it Maidnado. She said he kept combining stuff with tornadoes for movies (Hamburgernado, CSInado, Beernado, Motorcyclenado). My dad and I also watched Sharknado together. Dads are so clutch.

Marisol kept searching for Flora’s killer so she could get her son out of jail. Rosie and the Rich White Man she works for kissed. Carmen still hadn’t become a pop star. Zoila denied herself Rich White D from her past, and daughter Valentina wasn’t given any lines because the Rich White D that she’s been chasing was off at college.

Marisol: Marisol is still trying to figure out who killed Flora so that she can unjail her son, who, we learn, is adopted because Marisol’s ovaries never worked. My guess: A white woman stole them and used them to make earrings that she only wore once to a brunch with people she didn’t even really like all that much in the first place. Oooohhhh those evil whites.

Rosie: Rosie is almost all the way into her affair with the Rich White Man she works for, but she won’t ask him for the $17 she needs to bring her son to America because Latinas have a little something called morals, yo.

Carmen: Turns out that Carmen’s married (to an abusive man, because all Latinos are abusive — in fact, I’ve only just now paused from beating my wife and children to write this column, which my editor will have to run through Google Translate so he can understand it). Her husband comes to take her back to Latinotopia with him; she says no; he starts choking her; then the one-legged Russian house manager (OLRHM) hobbles in, tries to stop him, is tossed aside, then pops up and busts him over the back of his head with her prosthetic leg. Now she and Carmen are best friends, which means the OLRHM is going to have to stop training a bird to bite Carmen when Carmen changes its cage because that’s how the episode starts because I don’t even fucking know anymore.

Zoila: DNP — Coach’s Decision. Like, for real, she just wasn’t in the episode at all. Not one single time. Every time there was a part in the show where Zoila needed to be around to say something or do something to advance the plot, they’d just quick cut to this:

After the clip, they’d cut back and Carmen or Marisol or whomever would be all, “Ay, mamasita, you’re right! Gracias, Zoila!” and then the show would roll right along.

Oh, also, she spends the whole episode quarreling with a girl, Rich White V, who’s also after Rich White D (maybe it’s, like, diamond-studded or it vibrates or whatever, which is why they’re all after it?). Valentina and the Rich White V get into a fistfight later in the episode, an event that preceded Valentina telling Rich White D that she loved him despite them having never been on a date, an explanation that preceded her aggressively making him kiss her because, again, Valentina: Rich White D hunter.

(World War D is going to be a goddamn hit. The plot: All the zombies are girls and they’re all just feverishly chasing after the D. That’s it. That’s every scene. Brad Pitt can still be in it if he wants. Cut the check. That’s a winner.)