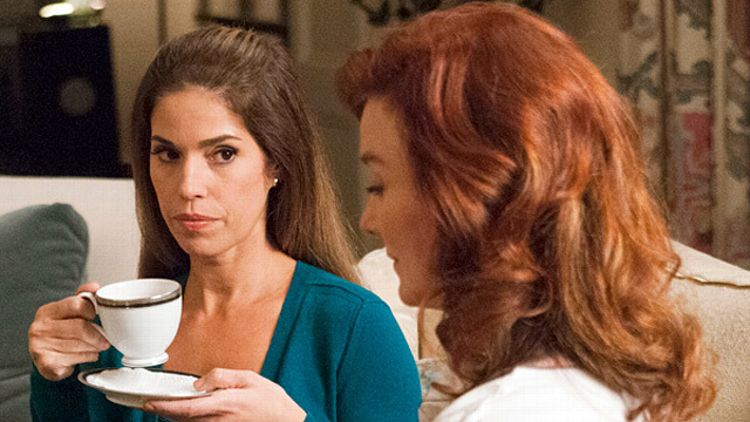 The message that I’ve received most since we started these show recaps: “Do I need to watch this show, or can I just read what’s written Monday morning?”

Answer: No, please, do not watch this show.

If you feel like you need to, just do this: Go to the store, buy a sombrero, put it on, walk around, then every time someone makes a bad joke, grab the top of it, pretend to make direct eye contact with a camera that isn’t there, open your eyes super big, then shout, “AY CARAMBA!” Then set your penis or vagina on fire. Boom. Devious Maids.

All of the maids continued to clean stuff but mostly they continued chasing down their secret agendas (Marisol: find out who killed Flora; Rosie: get her son to America; Carmen: become a pop star; Zoila: stop her daughter from trying to get Rich White D; Valentina: get the Rich White D).

Marisol Duarte
Marisol is still hunting down clues that will help her get her son (accused of murdering a maid named Flora) out of jail. Her journey to justice leads her to discover that the Rich White Woman that she works for used to be a prostitute, which then leads her to discover that the Rich White Man that used to employ Flora is running an elaborate prostitution ring. (FLORA USED TO BE A PROSTITUTE AND A MAID!!!) The police weren’t able to piece any of this together, but she was able to in about eight minutes because Latinas are sooooo wily and clever, and white people can be played like maracas.

Rosie Falta
Rosie is beginning to back her way into a love affair with the Rich White Man that she works for, set in motion by him getting a mega-boner when he hugs her after handing her a check for a large amount of money to help her get her son to America. To be clear, the term “mega-boner” is not a joke. Rosie discusses the size of his dong with Marisol and Zoila in the scene following the hug. Zoila happens to have a bag full of cucumbers that vary in size. Rosie pulls out one that looks like a baby’s leg. It’s probably 11 inches long, which, statistically, is pretty incredible.

Carmen Luna
Carmen is still trying to become a pop star. She scores a meeting with a world-renowned producer (pretty easy to do, duh), who tells her that she can become a star but that if she’s going to sing in English she’ll have to ditch her accent because Americans like Latinas but they don’t like when they’re too Latina. This is only slightly less cumbersome than them writing White People Are So Superficial on a bat and then coming to your house and smashing you rightthefuck across your forehead.

Shortly after the producer explains this, he pressures her into going to his apartment and having sex. The camera zooms in super tight on her dead eyes when she agrees, because they want you to know that she doesn’t want to do it but feels like she has to. Later on they show her in her bedroom practicing her wonderfully Christian accent and crying because fuck you, you’re dumb.

Zoila Del Barrio
Zoila is still trying to keep her daughter, Valentina, from getting that Rich White D. We learn that she’s doing this because when Zoila was young she chased that Rich White D hardcore and got her heart broken. :(

During the scene where Rosie is talking to Marisol and Zoila about the mega-boner of the Rich White Guy she works for, Zoila tells her to make sure that he knows that nothing’s going to happen between them. She offers: “We’re maids. The only thing we polish … is their silver.”

Sorkinisms II: Welcome to the NFL