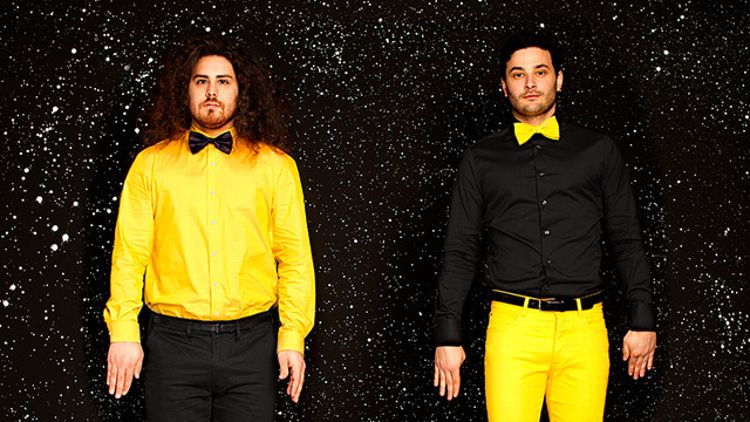 The band Dale Earnhardt Jr. Jr. has no connection to the NASCAR driver, nor to his legendary father, other than lifting the name for their own musical purposes. And they don’t necessarily write songs that call to mind cars hurtling around a track hundreds of times. Their second album, released on Tuesday, is called The Speed of Things, however, and that doesn’t necessarily solve the NASCAR confusion. We now conclude the racing-related explanations, and we highly recommend you check out the record. We’re also very pleased that DEJJ’s Joshua Epstein and Daniel Zott are taking this turn as guest editors on Songs of the Week.

Little Wings, “Look at What the Light Did”

Epstein: Little Wings is one of the most overlooked artists of the past decade. Feist ended up covering this song, which made it fairly well known … There is something that has always felt so raw and visceral about this version to me.

Zott: Conrad is only 19 years old and has a résumé of someone three times his age. I could stop there, but this also happens to be my favorite recording of one of Rachmaninoff’s best preludes.

Epstein: Drake is a pretty forward-thinking guy, and this song has me excited for a few reasons. First, it has a subtle chorus, which is a welcome relief from some of the overly aggressive choruses we are used to hearing in the pop world. Second, it has a really nu-disco groove to it, and I would welcome the chance to hear that influence more and more artists across many genres.

Zott: While traveling on our tour late at night this song came up in a mix and put me in a trance. The lyric “Let nothing stop you from being alone” felt like the soundtrack to my introversion.

Epstein: I heard this song in my car and it stood out from a lot of the other songs on whatever station I was listening to. I feel like I can’t tell whether they sound like 19-year-olds or like 40-year-olds. Maybe that’s what makes it cool?

Jimmy Ruffin, “What Becomes of the Brokenhearted”

Epstein: Motown has been the predominant melodic influence for me since I was a baby, and yet it still holds up, always the standard-bearer. This song is so well-crafted — the key changes and the chord changes are so complex and yet so fluid. I can’t stop listening to it.

Epstein: My good friend (and Detroit luminary) DJ Chuck Daniels put me on to this track recently. He plays deep house and jack house sets and yet still plays this one, proving that great music is always universal. This is collaboration at its best. A really talented artist remixing a great song. I think that Toro y Moi did a fantastic job here.

Epstein: When we were last in Detroit, I went to get a slice of pizza from Supino in the Eastern Market with our video/visual partner Ian. He played me Uproot Andy, who mixes some excellent world music and dance music, making these magical little gems.

Epstein: Our friends Christian Rich made the beat for this track, and it’s the perfect bed for what I think is a really intense and profound song. Earl Sweatshirt has some serious things to say, and it really feels like he’s brushing dirt off his psyche in front of an audience — which is endearing.

Zott: A friend of mine and one of my favorite Detroit graphic artists, “Chris Everhart,” turned me on to this songwriter. Little Kid has a Daniel Johnston quality about him that makes his songs feel like they could be lost tapes from a kid in the late ’90s.

Filed Under: Drake, Songs of the Week

Video on Demand Report: The Wolfpack Calls It a Day in The Hangover Part III