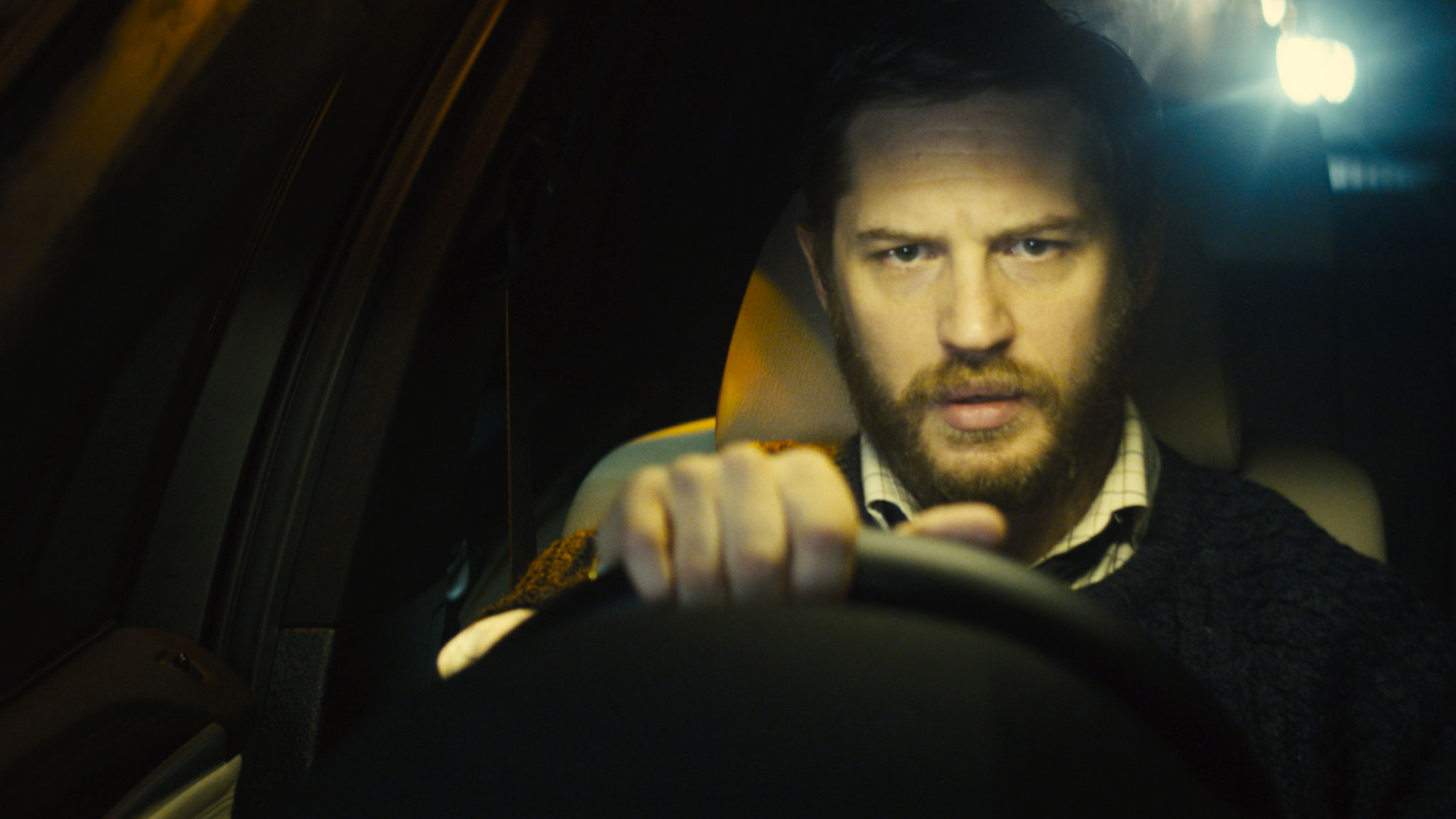 Tom Hardy subscribes to the “Fake It to Make It” method of acting. Hardy needs it in those moments when he doesn’t believe a word of what he’s saying, but knows it must work. The film is his mission. Failure is not an option. And the last thing he wants to do is drown himself in Master Thespian–style “Aaaaacting!”

“There are so many fucking wankers out there that talk about the craft and the art,” Hardy says from a New York hotel room earlier this week. “When people talk about it, nines times out of 10, they’re full of shit. Basic Lying 101 is what it comes down to. Don’t get me wrong, there is a huge amount of craft and a huge amount of passion that goes into a vocation in the arts, but it comes to the point where you go: Is it fun? Am I enjoying myself? Am I connecting?”

Perched on a leather chair, vaping from the only e-cigarette to ever qualify as “badass,” the 36-year-old Hardy explained the making of his new movie, Locke, the same way his character might: quietly, viciously, and with conviction. It’s that enigmatic and “no bullshit” personality — along with his classical training and newfound Hollywood stardom — that drew writer-director Steven Knight, who wrote the screenplay for David Cronenberg’s Eastern Promises, to the actor. Seated alongside Hardy, Knight’s a soft-spoken dramatist. But there’s a punk-rock edge, too — he needed it when shooting an experimental one-man show performed entirely in a moving car. Knight has made a career of following his own interests, cutting his teeth in spoof comedy, creating the original British edition of Who Wants to Be a Millionaire, and parlaying that success into his feature writing debut, the black-market organ harvesting drama Dirty Pretty Things. No one raised an eyebrow when Knight envisioned a luxury SUV as a West End stage on wheels, tricked out with the latest in digital cameras. For the actor playing Ivan Locke, a mild-mannered foreman whose life falls apart over the course of a 90-minute drive, the film would be like a Saw trap. Knight wanted only Hardy. Hardy was more than willing.

As movies and theater work harder than ever to distinguish their respective relationships with reality — what contemporary blockbuster isn’t aiming for “gritty and real” these days? — Knight envisioned Locke as a line-blurring endeavor, the heightened atmosphere of a play grafted onto a location shoot. The director’s production team concocted a plan to shoot the film, consisting of a series of escalating phone calls, in its entirety 16 times over eight days — like a nightly Broadway show playing across the M1 motorway between Birmingham and London. To set the “stage,” technicians outfitted a BMW X5 with lights and three video cameras to capture Hardy’s performance. “We always had one that was sensible, one that was a bit less sensible, and one that was a weird angle,” Knight says. The car was then strapped down to a low-loader, to be dragged in real time by a truck housing Knight and his camera crew.

Why not let Hardy drive? He doesn’t have a license. “[I’m] fucking hopeless,” he says. “Who cares, man, it’s movies! That’s the magic.” 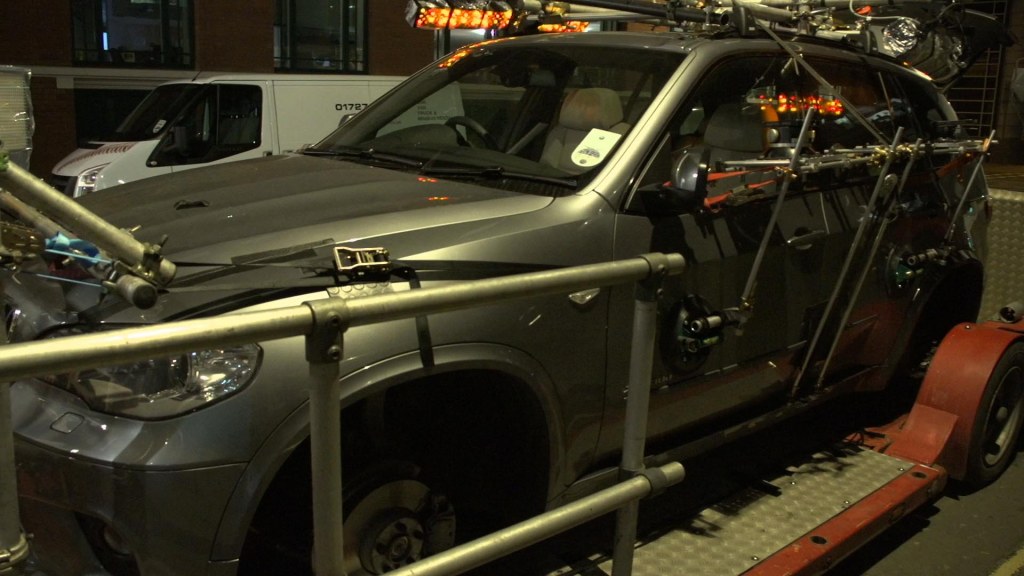 When filming was in full swing, Knight resisted directing his star in the moment. They had opportunities to communicate — pauses every 30 minutes when cameras maxed out on footage and required downloading — to theoretically huddle and strategize. But Knight saw the upside of letting Hardy fly.

“What you do is leave the cameras running and watch,” Knight says. “And because Tom is now inhabiting this space for real, you’re watching a real person. So when the emotion comes near the end, it’s been earned, because you’ve felt that all the way through.”

Hardy may shy away from thespian philosophies, but he credits formal training with making him aware — and then effortlessly unaware — of his elaborate technological surroundings. He described “the burn,” a screen-acting technique, like Ricky Jay might a magic trick.

“Regular cameras are a bit like where the sun is at, where you’re trying to get a tan, you know where it is, so then you have to just ignore it,” he says. “Or the person that you’re trying to impress in the room — you’re aware of their presence but you don’t want to let them know that you’ve acknowledged that they’re there.”

With bright lights washing out the windows, and an Autocue — a British teleprompter — delivering a continuous set of cues, Hardy was effectively lost to Locke’s psyche. “Having three or four cameras in a confined space like a car, I obviously want them to capture as much as possible,” he says. “Technically — as opposed to vanity — it was a very safe place.” 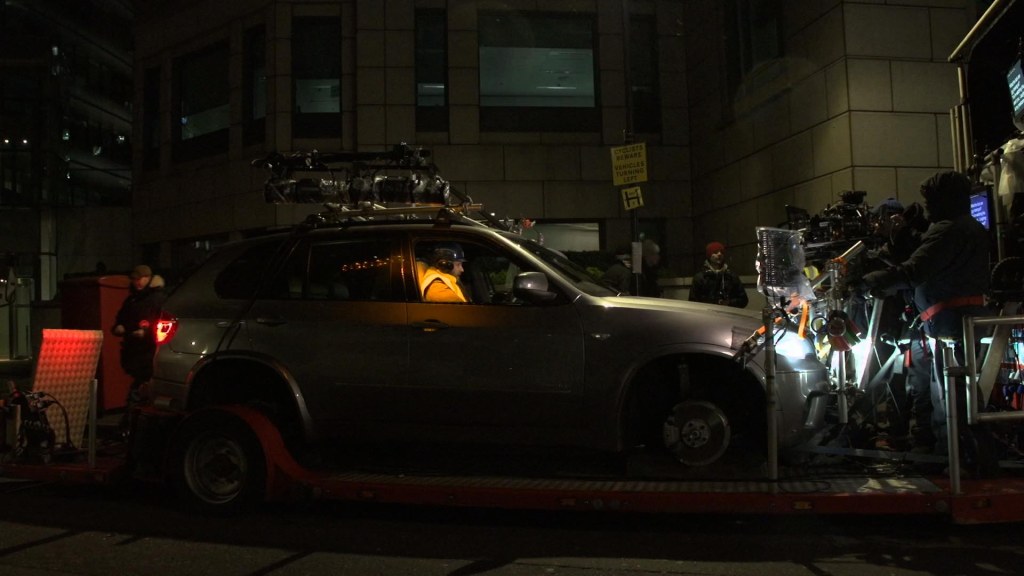 Locke’s crew had just two weeks to work with the in-demand Hardy. To maximize the ambitious style, Knight sat his cast down for a five-day roundtable rehearsal. In those sessions, actors would phone in to Hardy’s vehicle from an off-site hotel room, developing rhythms for the film’s succession of conversations. It’s also where Hardy found Locke’s distinct voice, a soothing Welsh accent inspired by Richard Burton’s recitation of Dylan Thomas’s “Under Milk Wood,” Anthony Hopkins, and the ’70s British cartoon Ivor the Engine.

With a soundproofed exterior and hidden microphones on set, Knight created a calming, almost musical conversational atmosphere he could rely on while pursuing his many camera angles.

“Ivan goes from A to B and he puts out fires and it all goes horribly wrong,” Hardy says. “He has to have a voice that is consistent, steady, and rock solid, no matter what’s going on outside of the window. His voice doesn’t waver, which is important. So taking into account a few things like that, Wales popped up as a sort of, They’re nice, that’s a kind and gentle sound.”

But the meticulously plotted shoot was practically begging for interference. Fate was happy to oblige: When filming began, Hardy arrived to set under the weather. Instead of hiding it, Hardy and Knight improvised: Ivan Locke would simply have a stuffy nose and a strong desire to down cold medicine. “I was tripping my nuts off drinking Beechams Night,” Hardy admits. “I was out of my head.”

Knight threw a few of his own curveballs, too. Each night, he would write his cast of unseen callers letters on what to do differently in the following evening’s performances, hoping to catch Hardy off guard. He would also schedule scripted phone calls later than expected, forcing Hardy to stew in his seat, waiting for the ring.

“You don’t know what person or mood or sound or cadence is going to come on the other end of the phone, or when that call is coming in,” Hardy says. “So I’d be sitting there waiting, and then the call would come, and I’d take the call, and we’d run through the lines. And every time [I] answered it’d be different. It’s like a band with a bit of music: It’s going to ebb and flow in real time, which is the benefit of straight takes, going straight through.”

Throughout, Hardy saw himself as another piece of machinery for Knight to click into the rig. He’s a performer who can “crowbar things onto text because you need it,” Knight says, even when the material drifts into Hamlet-like monologues. But he shares a goal with the wankers: a performance boiling life down to its emotional, physical, and spiritual elements.

“I think that ultimately that’s what I’m in it for, connecting those dots,” Hardy says. “Away from the industry and the money and all that, that’s fundamentally key to absolutely everything — including conversations like now. Did we actually capture the essence of what we came here to do at all? Will that go out of your dictaphone through you transmuting to the public? And ultimately, does it matter? It does, I think. Connection is everything. When you witness that, it’s a beautiful thing.”

Can Everyone Please Stop Talking About Jon Hamm's Enormous Penis? It's Bumming Him Out