Can Everyone Please Stop Talking About Jon Hamm’s Enormous Penis? It’s Bumming Him Out 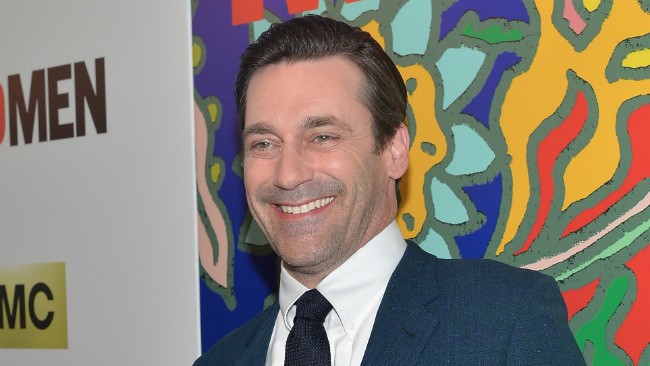 Jon Hamm is exhausted. Not from the demands of a critically adored TV show and a steadily evolving movie career, nor from the burden of being perhaps the most handsome man on earth, with a face chiseled from a hunk of interstellar movie-star granite that crashed into the backyard of his parents’ farm. No: It’s the penis thing again. It’s enormous, and nobody can shut up about it. Still. You’d think that people would get used to it, get bored of tapping the glass of the python tank in hopes of stirring it from a peaceful slumber so that they might watch it slowly coil itself around a thick tree branch. Start taking that girth for granted and move on with their lesser-genitaled lives. This has not happened. People are still obsessed. Still asking about it. Like the folks at Men’s Fitness, on whose cover Hamm appears this month, and in whose pages he offers his latest — and doomed to be ignored — plea to stop poking the angry Cyclops that’s made its home in his pants-cave. His words, via E!:

Would you want people walking up to you and pointing at your d–k? I can’t believe I’m still talking about this. But I’ve worn underwear every day of my life and the fact that I’m painted as this exhibitionist is a little annoying. It’s become a meme, I guess. Being someone who people want to photograph, you have to open yourself up to the positive and negative. It is what it is. If I get mad at it I’ll look like a douchebag. But it’s silly.

It is silly, once one wipes clean the unfortunate mental tableau of a couple of tourists looking up from their Star Cock Map, seeing Hamm in front of them, and jabbing fingers in the direction of their cornered quarry, disbelieving their incredible luck, fumbling through some incredibly awkward selfies. But it’s also probably time to start owning it. It’s time to be photographed walking the dog while wearing a novelty T-shirt with an arrow pointing crotchward, announcing “I’M WITH GIANT PENIS.” It’s time to meet the annoying and incessant questions of the prying media with a folksy, 10-minute story about the time he tumbled down a well and was hoisted out by unfurling 25 feet of penis. It’s time to lionize, mythologize. Pretty soon everyone will decide you’re embellishing, and move on to the next big penis-thing. Or back to the last big penis-thing. You have to own your penis-truth. It is what it is. And what it is is enormous.