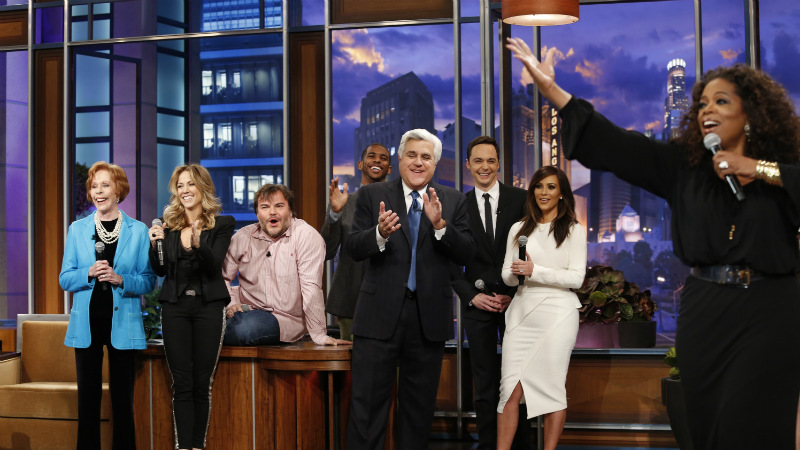 On February 6, 2014, Jay Leno hosted the final Tonight Show of his legendary 22-year run. Comedian Billy Crystal, Leno’s first guest after taking over for late-night icon Johnny Carson in 1992, returned to bring closure to Leno’s tenure. But Crystal had a huge surprise for his longtime friend: He’d planned an all-star musical send-off featuring some of Hollywood’s most celebrated names, past and present. This is the story behind the greatest musical tribute in the history of late-night television.

Billy Crystal (comedian, friend): When Jay called me up and asked me to be on his last show, yeah, of course I’m coming back. I was his first. That’s a special thing. Even if a lot of people are still sour about this not being the first ending. Second endings matter, too. It’s still an ending if he stays gone this time, which I think he will. Probably.

So immediately I started brainstorming ideas for stuff I could do that would be memorable on his last night. And the first thing I came up with was “All-Star Sound of Music sing-along.” Sometimes the first idea is the best idea. You don’t want to overthink it. Go with your gut.

Marc Shaiman (composer, piano player): Billy rang me up and said, “Sound of Music sing-along for Jay. Jay Leno.” Done. Classic. NBC just did it and it was a huge hit.

Crystal: And then I said, “Elton John?” You gotta get Elton John.

Shaiman: Elton was not available. I didn’t pry too deeply. It’s possible he didn’t get the voice mail.

Crystal: Everybody gets the voice mail, though, right? We still did pretty good with who we got. You’re not gonna sneeze at these people. They are sneeze-proof.

[A call to Elton John went to voice mail.]

Shaiman: All things consideredm this was a very solid group. It turns out Elton was in Toronto. You’re not going to stand up an entire country, even if they’d probably be polite about it.

Jack Black (actor, musician): Billy’s all, “Jables, you want in on this Leno thing?” And I’m like, “What thing?” Oh, right, he’s leaving the show again. You know I’ll be there, I tell him. He’s Billy Crystal.

Crystal: Jack Black was in right away. And you know he can sing. He’s a talented man. You forget about Elton immediately. Elton’s not a movie star. And Jack’s a big Leno guy.

Black: I’ve actually never met Jay Leno. True story. I mean, on the show, yeah. But like off the show, no. Not even in the dressing room or whatever. You don’t have to be best buds with everybody. It’s not called “show buds.”

Crystal: So right out of the gate you’ve got a guy who brings energy. He leads off and we’re cooking with gas.

Black: I found my verse a little rough. “If Fallon tanks, you’ll be back here next year.” It’s almost too real. But you sings what they tells you to sings. Do you dance and get off the stage. That’s the gig.

Crystal: And how do you follow that? You gotta bring a different look. There’s an art to this.

Shaiman: I’m still sort of mad at Elton, quite frankly. Everyone gets the voice mail.

Kim Kardashian (celebrity, businesswoman): Jay has told, like, 10,000 jokes about my butt?

Kris Jenner (manager, reality TV personality): I literally had to hold a knife to the talent booker’s throat. But we got it done. The scar is barely noticeable, she’ll be fine. This is a little overblown already. Nobody called the cops.

Crystal: After a Kim Kardashian, you have to go big. You have to show your reach into the city.

Chris Paul: The Jay Leno Show shoots right here in L.A. They send a car for you and everything. It was easy. You’d almost feel bad not going.

Crystal: Jay’s a huge Clippers fan. Not in the classical sense. He’s not unaware there’s a team besides the Lakers in town.

Sheryl Crow (musician): I was somewhat apprehensive about following Chris Paul. But I get why they put me there. He’s not your music guy. He’s an athlete. You need a professional at some point to keep this thing from spinning out of control.

Crystal: Jay really wanted a Lance joke. In the one-ball area. He knows what the people want, always has.

Crystal: No Lance Armstrong jokes. That was a promise to her and we kept it. All you have in show business is your word. We gave her the Letterman bit. It was fine.

Jim Parsons (actor, The Big Bang Theory): No, it’s not necessarily “cool” to go on Leno. But it’s not “cool” to be on CBS either. Count my Emmys. Plural. There is power in being mainstream and reaching the largest possible audience. You must respect it. You feel a kinship with other people who are in the club.

Crystal: The nerd-show kid sort of had a chip on his shoulder. Relax, guy. You wanna be that way, you get the chin joke.

Parsons: I got the chin joke. I take it as a sign of respect. It’s the one everyone was waiting for.

Roger Hansen (cue-card assistant): He asked for the cue card as a souvenir. For his trophy room. OK, you can have it.

Rickey Minor (Tonight Show bandleader/musical director): I looked at the guest list and I had concerns. It felt like we weren’t addressing history. All these young kids. That’s not really Jay’s bread and butter.

Carol Burnett: Show business is dying. I don’t think anybody over the age of 40 would argue with that. So you show up and pay your respects at the funeral, you know? A Tarzan yell by the graveside felt right. It’s defiant.

Kardashian: The yodel lady was so loud? Hurt my ears.

Paul: I am the world’s biggest Carol Burnett fan. People don’t know that about me. I do the earlobe tug at the foul line. Respect.

Crystal: We were stumped for the longest time on who would be our closer. You gotta finish strong. It’s the man’s last night. They got some pretty huge names for the “What’s Next for Jay?” package  earlier in the show. Obama. Stallone. Carvey. Marky Wahlberg. Charlie Sheen. You ask yourself, who’s left? What makes sense?

Black: My agent told me I was gonna be the anchor. Agents tell you things. But you see how it played out, you know, cool. How are you going to complain? [Whispers.] You could wind up deadsies.

Crystal: It gets even trickier because there are certain folks who have, shall we say, allegiances. So some people are off the table right away. You go to the top and ask for some help.

Robert Greenblatt (NBC president): Ask Jeff Zucker to help you, I tell them. He leaves a flaming bag of dog shit on my doorstep and you ask me to stomp it out? Get real. Put on your big-boy galoshes and do it yourself. I’m a Fallon guy.

Crystal: People were maybe a little preoccupied with the Olympics. It’s a busy time at the network.

Crystal: I don’t even remember how it came up. The next thing you know, Oprah’s in. It’s incredible. This is literally the most famous person on the planet. Bringing it home for us. For Jay. You couldn’t ask for anyone better.

Donna Garrison-Lawler (Oprah Winfrey’s first assistant): Ms. Winfrey would like any audience members in attendance last night to know that she did not actually offer to buy them a car. The idea is that the cars would come from Mr. Leno.

Parsons: Oprah gets me. We shared a wordless moment of understanding. There’s this actual crackling of electricity that occurs when two juggernauts come that close together. That’s a real thing. Read the literature.

Black: When they released the doves for her entrance, you’re like, “Every one of those doves knows Oprah Winfrey.”

Crystal: We’re all gonna look back on this as the greatest moment of our lives.

Jay Leno (outgoing Tonight Show host): My only request was that Garth Brooks play music on my last show, and he did. All this other fuss-making gets uncomfortable. I could have done without it.

Shaiman: Elton sent me the biggest flower arrangement you’ve ever seen. It literally came in a 16-wheeler. The card said “Call me when Leno dies. I’ll do ‘Candle.'” OK. He’s booked.

Songs of the Week: The Majestically Underwhelming Return of U2