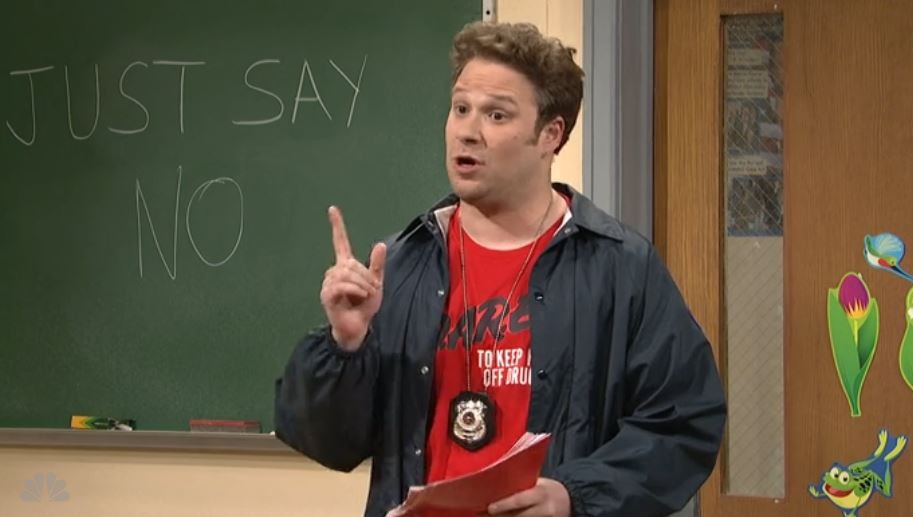 SNL’s 39th season is winding down, and despite (or maybe because of) all of the controversy, cast restructuring, and midseason “Weekend Update” musical chairs, the show’s content has suffered a moderate case of the blahs. Last weekend, host Seth Rogen took the stage for the third time, bringing along some cameo-ready friends for help. It was one of the better episodes of the year, but it looks as though the show’s overhaul will mean that this transitional season (also the name of my menopausal tea) may spill over into the next one — newbie anchor Colin Jost hasn’t quite warmed up, some of the pretaped sketches continue to stumble, and even the trustiest of setups (Seth Rogen and weed, the ultimate BFFs) are struggling to align with their punch lines. Rogen brought his signature goofy energy and played excellently off the rest of the cast, but as has been the recent trend, sometimes the material just didn’t live up to his abilities.

But why complain when there was a puppy on set? Nobody wants to piss off Peanut or his/her agent. After checking in with the trendiest Republicans at Coachella in the cold open, Rogen ushered in a triumvirate of celebrities, cued by entries in his SNL taping-week journal. Inspired by a familiar smell emanating from a writer’s room, many of Rogen’s “doodles of the Wu-Tang W” and jokes about pizza wound up on the cutting room floor. His family (Noël Wells, Bobby Moynihan, Kate McKinnon) stopped by to lend their support (and Rogen family signature heh-heh-hehs), but Rogen was less keen to accept assistance from Zooey Deschanel, Taylor Swift (“You’re getting really upset and whenever a man shows emotion … I appear”), and James Franco, who had been waiting for the host for three days at the Ace Hotel after being duped into repeating his adventures as the Humbert Humbert of Instagram. Lo-Fi: filter of my life, tag-bait of my loins.

Let’s pull the funky peanuts out of the bag first, so we’re done with them. At Rogen’s engagement party, his cousin (Cecily Strong) and her buddy (Nasim Pedrad) took a break from their shifts at Spencer’s to unsettle the bride’s buttoned-up family in attendance with a story about that one time the groom-to-be blew a sleeping man. Despite the tale featuring a mention of an “astronaut diaper,” and even more so despite Strong’s tiny shirt bearing the words “Objects Under T-Shirt Are Larger Than They Appear,” things got even creepier when the sleeping man in question (Beck Bennett) showed up, awake and innocent to the events that had transpired long ago.

Next up was “Undercover Sharpton,” a spoof of the true story of Al Sharpton’s involvement in an FBI sting operation (with the reverend played by Kenan Thompson). This should have been so good! Alas, it never quite got off the ground, and Rogen was wasted as one of two coke dealers (along with Moynihan), which was a shame.

But the biggest disappointment was the pretaped 420 skit, which — like Sharpton — made promises it just didn’t fulfill. Kyle Mooney’s mumbly stoner (SPOILER ALERT: he doesn’t smoke, he just enjoys the holiday) blowing out a mini menorah of “holy blunts” devolved into a sing-along of weedy tunes (“bing bong rollie jays dude”) before his straight-faced dealer, Scott Maher (Rogen, displeased at the use of his last name), showed up to join in. This segment’s failure to produce laughs was like having the munchies when your fridge is stocked only with day-old oatmeal and little dried-out carrot nubs. All that jelly and no toast! (Pass on this one, puff on the send-up of CNN’s newsless updates instead.)

Okay, now on to better things. Shallon (Pedrad), classroom anarchist, was up to her old sweatshirt-clad tricks again, this time defeating a D.A.R.E officer’s (Rogen) “just say no” lesson — when a substance can make flunking a spelling test feel like acing it, you better just say, “Thanks for the opportunity, shady alley drug dealer.” Rogen’s energy sustained this one, but I’ve always been a fan of Shallon anyway. I take my Pedrad any way I can get her.

Though it wasn’t perfect, “Steakhouse” did allow Rogen to paint his incapacitated girlfriend Helen’s (Aidy Bryant) face with lipstick, smear it all over with a whole steak on a fork, and unbutton Helen’s shirt to cool her down when the steak fumes overwhelmed her (leaving her “sitting here in Roanoke’s finest steak place with [her] flying saucers hanging out”). The best part was watching Rogen and Bryant try to hold it together after he deliberately misunderstood her instructions to “cut it” (the steak), issuing a resounding fart because he “just wanted [her] to suffer.” (Caring for diva invalids, man — it’s tougher than serving in “Afghanistans.”)

Rogen created similarly great chemistry with Strong during “Blue River Dog Food,” which juxtaposed a full-scale emotional breakdown over chicken byproducts with a distractingly adorable live puppy. (Hopefully, NBC will foot its therapy bills, because it just witnessed a LOT OF YELLING.) Unhinged by learning that she’s been feeding her dog subpar kibble (“It’s like they think I’m dumb!”), Strong owned this sketch, but Rogen propped her up expertly.

I know I might be in the minority here, but I was also fond of the 10-to-one “Herman & Sons,” which cast Herman (Rogen) and Sons (Thompson) as co-owners of a sperm bank announcing its clearance sale before becoming a TCBY. Every joke is an obvious one (“Get this sperm off our hands”), but I don’t mind as long as the sperm-to-yogurt crossover is kept below 9 percent. What a handy reminder to think twice before ordering the white chocolate mousse! Thanks a million!

The best sketch of the night didn’t involve Rogen, however, but Franco. One of the thinkier pretaped shorts, “Monster Pals” featured Mike O’Brien and Franco as Danny and Jimmy, pictured first in full monster regalia, just a couple of gruesome-lookin’ buddies speaking in their native (subtitled) tongue and discussing the prospect of human-resemblance surgery. The jokes are subtle and smart, and it’s a shame Rogen wasn’t given more of this kind of material to play with.

This season’s weaknesses have rarely been the fault of the host, and this week was no exception: Rogen’s warmth and enthusiasm kept the ball rolling even when the script dragged. With such a capable cast, the real question is how SNL will evolve in the remainder of this season — and during the next — to showcase its actors a little better. We don’t want to remember this as an era of dookie elevators.

NEXT TIME: After a break, Andrew Garfield hosts with consciously uncoupled Coldplay as musical guest on May 3.

"I don't know and I don't care." -- Harrison Ford might be a little tired of "Who shot first, Han or Greedo?" question