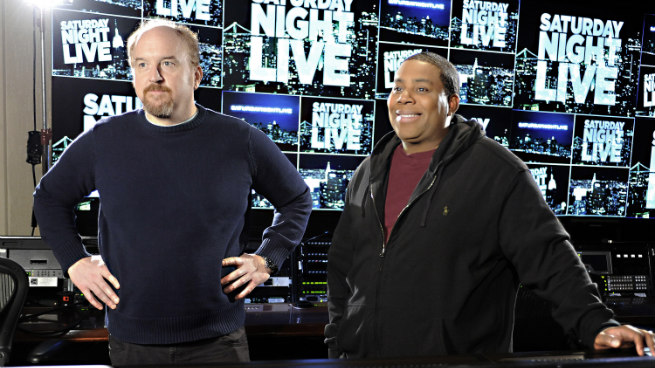 The last time Louis C.K. was on Saturday Night Live was a few days after Hurricane Sandy, in November 2012. It was a pretty incredible episode (earning C.K. an Emmy nomination for Outstanding Guest Actor in a Comedy Series) and, partially because of the natural disaster’s impact on New York, an emotional one, too. “Lincoln” and the first run of “Last Call” were standouts, but so was C.K.’s monologue, which interrupted a musical-heavy run and reminded us that cue cards are, sometimes, just a pain in the ass. The energy and authenticity the comedian brought to his first turn on the show — if you don’t count his collaboration with Robert Smigel for the “TV Funhouse” shorts — were refreshing, so much so that it made you wonder what would happen if every host took a similar approach (it probably wouldn’t be good, but it would certainly be interesting).

This weekend C.K. was back, with no widespread power outages or deadly, expensive local weather patterns to affect production. There’s no way to compare the two appearances because of the special circumstances that lent a weird meaningfulness to, say, a couple of drunk strangers settling for each other’s warm bodies in a bar after last call, but the combination of strange material (pajamas with sex holes, the epidemic of paranoid patients fearing action figures had been inserted into their anuses) and C.K.’s innate appeal made for an entertaining, if somewhat uneven, show. If the litmus test of hosting gigs is how it affects the audience’s excitement levels for the host’s product — in this case, that would implicitly be the May 5 premiere of Louie — then C.K. has done his job (but to be fair, it’s hard to be more excited for Louie’s return than I already am).

After a lukewarm cold open (a social media push for Healthcare.gov, which included Kate McKinnon’s Justin Bieber smooching Pharoah’s Obama), C.K. took the mic for another stand-up monologue. Touching on topics like religion (maybe God is a divorced father, in which case all of our complaints would be met with the reply, “I’m trying, and it’s just me up here!” — but it also invites the question: Where’s mom? Check God’s trunk), tone-deaf first-world phrases (claiming to be starving, the term “wife beater”) and the redeeming qualities of men versus women (women win overall, our oppression is due to having flicked men’s penises as they strode around naked somewhere in a period shortly following the beginning of time), you kind of got the sense that C.K. had just been allowed to do and say whatever he wanted. It’s kind of like how you wait all season for Top Chef’s restaurant wars, when all the chefs will be freed from the constraints of having 20 minutes to make canned-tuna souffles and be permitted to simply do what they do, coasting on a rule-free wave.

While there was nothing as exceptional as “Lincoln” or “Last Call,” there weren’t any obvious superclunkers last night (though “Weekend Update” seemed abbreviated and unremarkable, C.K. did not make an appearance and so I’m going to skip over this — but not without saying that I think Cecily Strong should be given interview duties at least half the time, especially while newbie Colin Jost finds his legs), though there were some really odd goods. But first, the winners:

Beck Bennett’s white-collar baby-man has reappeared on the scene, and this time his pureed liver and peas isn’t sitting well. The debut of this character was revelatory, but now that we’re used to seeing an adult waddling around in a suit batting at objects, some of the novelty has worn off. Still, the fact that C.K. is a dad influences a lot of his comedy (and earned a mention in his opening monologue), so seeing him execute a secret frat handshake minus the motor skills with his baby boss was particularly informed. It’s also always a good idea to begin a sketch by throwing cake directly into the eye of your scene partner, so that he has to spend the rest of his screen time with blue icing on his eyelashes.

The chronically underused Mike O’Brien deadpans as C.K.’s doctor, who probably thought he was done with his patient after the physical was completed — but C.K. has one last question. Just … say, perhaps, that a Darth Vader action figure maybe made its way into his rectum. Just say. Wouldn’t the doctor like to perform a check? And while we’re all here, with the examining room door open, wouldn’t the doctor like to poke around the nether regions of the janitor Reggie (Kenan Thompson) and a fellow medical professional (Beck Bennett)? And maybe while he’s at it, could he be bothered to look for a General Grievous hanging out inside the secretary (after all, she’s a lady)? It’s just better to know.

N.B.: If you prefer your stars Trekkier, please head on over to this web-exclusive sketch to see C.K. wearing a Klingon forehead and worshiping himbo posters.

OK, so maybe C.K. figured into this one only as the guy who wasn’t allowed to refer to retro buddy cops Les Dykawitz (Kate McKinnon) and Chubbina Fatzarelli (Aidy Bryant) as “Dyke and Fats” (let them own their nicknames!), but this is too great a sketch to neglect, even if my eyes are supposed to be trained firmly on the host. If anyone has ever been nasty to McKinnon for being a lesbian or Bryant for her weight (why would someone do this? Well, someone did), this sketch was a great way to address it, especially because of the closing title card that announces it was “Created by Aidy Bryant and Kate McKinnon.” That burger owes Bryant a phone call.

This wasn’t perfect, but C.K. as an African American history professor at Brigham Young trying to question the answer “Had that been me, I wouldn’t have been around those dogs in the first place” with Michael Vick and getting corrected with a phonetic bungle of “Sarah McLaughlin” was all worth it.

God forbid an episode of SNL would pass without a song, so here we have a fistful of women (Sasheer Zamata, Cecily Strong, Bryant, and McKinnon) dressed in animal prints waiting to ambush passerby C.K. with all of their pent-up boyfriend frustrations in a rendition of “Mr. Big Stuff.” Sadly, he’s “Mr. Medium Stuff, at best” with a clip-on goatee.

This leaves us with the weird. Again, they weren’t bad — just weird, and not really working their weirdness — but I wish they’d been more successful in their execution.

Elevator music, strange accents (PIE-NAPple juice), a walk-on assailant, and a question: How many holes does one detective (C.K.) have to cut in another’s (Vanessa Bayer) clothes in order to have sex with her (answer: “How many holes are you OK with?”). Did this come from the cutting-room floor of the feature Friendzone Dick? Does it take place on Earth? What the hell is going on? C.K. didn’t seem to know what to make of it either, tripping on the last line of the skit. I wish Mike O’Brien’s bugs on the street had just entered and eaten everyone.

C.K. shows up at Bryant’s house, post-spurn, to deliver a “take me back” speech set to swelling music (which doesn’t seem to be synced up correctly, or maybe that was on purpose). He’s sorry he didn’t put her feelings first … and he hopes she’ll be the first person he sees in Hell. He’s also carrying garbage bags that “smell like calamari,” can’t pronounce “man” (as in, she makes him want to be a better one), and has a great idea for a theme park that’s a cemetery. And he wants 15 grand from her. And she’s into it, after they’ve swapped a few “Shhhhhhh…ut ups!” Again: BUGS, this is your entrance cue.

What’s kind of interesting here is that C.K. caught some flak for being a poor sport in 2012’s ludicrous sketch “Mountain Pass” because of his obvious discomfort with the material, and now he’s been handed two of the more out-there sketches of the season and committed completely (even though he still can’t spin them into gold). Maybe he just really hated his cloak and horn.

All things considered, it was a solid show, though I think this season is still working out some kinks — especially when it comes to using its sizable cast and figuring out how to push its oddities to the limit.

‘The Walking Dead’ Season Finale Recap: Separating the Meat From the Gristle in ‘A’