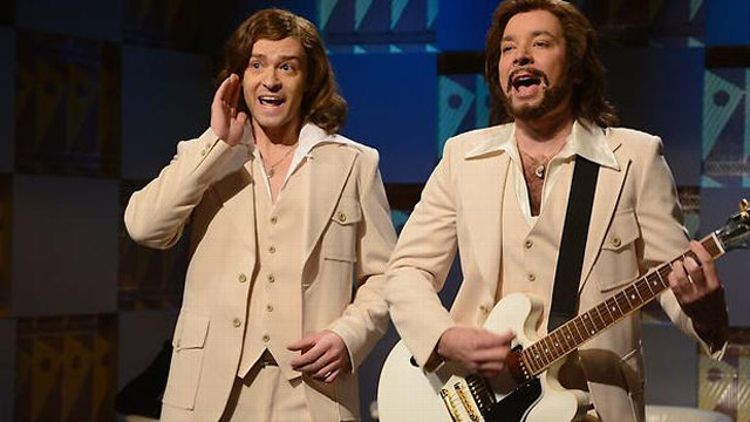 I’ll be honest: There’s no way I wasn’t going to love this Christmas episode of SNL. I’m about to go on vacation, the tree is up, I’m getting new T-shirts, and I already knew before I watched that there was going to be a “Barry Gibb Talk Show” sketch (not that it was predictable — Robin Gibb died in 2012, so the decision to reprise this skit was probably not made lightly — but because Twitter spoiled it for me in advance). There is no hate or criticism anywhere inside me — well, except maybe a little bit of flak to throw at the boring gay stereotyping going on in the Christmas Carol spoof.

Justin Timberlake pulled duty and a half this week, not in full host mode but appearing as a welcome addition in several sketches with Jimmy Fallon. Their chemistry makes you feel so cheerful; waiting for Timberlake to make Fallon break into giggles and seeing the way the two create silliness that verges on chaos generates enough energy that you almost feel like you’re their third best friend — the invisible, quiet one who doesn’t sing. Fallon’s perpetual state of giddiness got on some people’s nerves during his time as a cast member, but as a fellow giggler, I always liked it. Still, he kept the smirks under control during this episode, and when Timberlake eventually made him lose his bones, it was almost festive.

Judging by the persistently hollering audience member (“[INDECIPHERABLE]!!!”), I wasn’t the only one happy to see the return of Timberlake’s jingle-mash-up street vendor (see Liquorville, Plasticville, Omeletteville, etc.). This time, Timberlake and Fallon are a wrapping duo (Timberlake as a roll of wrapping paper, Fallon as a gift bag) inserting some healthy competition into a gift-sheathing market previously monopolized by Aidy Bryant while improvising on Ludacris, Run-D.M.C., Michael Jackson, and Gotye. The vocal fan in the studio that night forced a couple of acknowledgments (I’m still not sure if Timberlake’s “Thanks, mom” was a play on the fact that Bryant’s character was his mother or that his mom was responsible for the [INDECIPHERABLES!]), but I didn’t mind. Some people are over the -villes, but I think they kind of work like acting warm-ups, getting that blood pumping like Meisner would have wanted (the “deck sacking” joke was for extra credit).

Fallon’s monologue was, predictably, arranged in song form. After expressing gratitude for the birth of his daughter and his new gig on The Tonight Show, Fallon indicated the three empty mikes that awaited his special guests Bob Dylan, David Bowie, and Paul McCartney, who were stuck in the Lincoln Tunnel. Switching between spots, Fallon impersonates each of them until McCartney appears (he cruised over on a Citi Bike). A duet of “Have Yourself a Merry Little Christmas” follows, ending with McCartney playing a teeny, tiny harmonica (which I first mistook for a toke, because my brain was in Amsterdam with Miley).

Moving right along: Next was “Family Feud: Celebrity Edition,” hosted by Steve Harvey (inching closer to his goal of “being on mute in every waiting room in America,” and played by Kenan Thompson), featuring a battle between CBS and NBC stars. Among the celebrities in attendance were Alyson Hannigan (Noel Wells), Ashton Kutcher (Taran Killam), Ice-T (Jay Pharoah), Brooks Wheelan (as … his rarely seen self), Jim Parsons (Fallon), and Timberlake as Fallon. If you don’t like it when Fallon falls apart, well, tough gingerbread: This sketch wasn’t for you. Fallon fell to pieces pretty much immediately after being confronted with his double, and soon they both had to turn away to get their laughs out. In case you were wondering, the survey says that the sexiest thing a man can do is to “be Justin Timberlake,” but you’ll still get on the board if you answered “wear a Miyazaki T-shirt.” Bazinga.

“Let’s Do It in My Twin Bed,” a brilliant pretaped homage to getting it on in your folks’ crowded house during the holidays, was pretty much as good as it gets. The women of SNL were transformed into a Pussycat Dolls–esque gang of seductresses, equipped with monkey pajamas, X-Files tapes, and an old feline having hairballs under the bed during foreplay. Fallon had his own verse, but it was upstaged by Lil’ Baby Aidy’s (Bryant) story about her mom catching a cold from someone named Jean, and a parade of seventh-grade yearbook photos.

Because Barry Gibb made a cameo (how did it feel to see himself with chest hair, frozen in this period?), I’m assuming the Gibb family is OK with allowing Timberlake to continue to play Robin for “The Barry Gibb Talk Show” — and if they’re OK with it, so am I. Fallon’s Gibb is a bossy talk-show dictator who can only be calmed by performing safety-blanket harmonies with his brother. It’s a weird setup, but I’ve always liked it; making breaking into song seem spontaneous is the true test of a mind-meld between two performers, and let’s just say this one has always been a lot more charming than Garth and Kat. Along with Paul Ryan (Killam) and Megyn Kelly (Cecily Strong), we got to see a guest appearance by Madonna (as herself, seeming a little nervous) and her gold grill and hear a line that I will remember for at least one day: “I wasn’t born on the Isle of Boy, I was born on the Isle of Man!”

Fallon and the be-grilled Madonna introduced Timberlake’s first performance, “Only When I Walk Away,” which he seems to want you to attribute to his Yeezus period. There are copious lasers, darkness, and a projection of the singer’s head. The lasers did most of the work. “Pair of Wings,” the secret track that seems to allude to Britney Spears, was better: Timberlake sat at the front of a circle of string musicians and crooned earnestly and effectively, even if the lyrics to this song (older/colder, disappear/my dear, “I could stay right by your side and keep you so near”) are the kind you might want to stash under your twin bed next to the JTT poster.

It looks like we’ve still got Seth Meyers for a few more episodes of “Weekend Update,” which is great news even if his guests saying good-bye to him does become a slow peel of a Band-Aid. Billie Jean King (Kate McKinnon) — retired tennis pro, delegate to the Sochi Winter Olympics, and “big gay middle finger” to Putin — dropped by first, breaking out all the lesbian stereotypes (Subaru Outbacks, pit bull rescues, Melissa Etheridge), and then Fallon and Michael Bloomberg (the real one) took over. This allowed for the baton-passing between Fallon and Meyers to be addressed, as well as Bloomberg’s own professional transition (he plans to pursue his lifelong dream of “enjoying a small soda on a non-smoking beach”).

Speaking of small sodas, the second go-round of “Waking Up With Kimye” spent some time tackling the cover of the book Kim (Nasim Pedrad) is “starring in,” otherwise known as an issue of Us Weekly featuring her body (it’s back, mostly because Kanye won’t let her munch on her gingerbread night club). And though I don’t know that we need another parody of “Bound 2” after Seth Rogen and James Franco’s, I did appreciate seeing lovemaking interrupted by reindeer antlers.

If one celebrity-impression roundup wasn’t enough for you, your second came in the form of “Now That’s What I Call Christmas,” featuring Fallon as Michael Bublé, Pitbull, Harry Styles, and Alan Rickman; Bobby Moynihan as Andrea Bocelli doing “I Saw Mommy Kissing Santa Claus” (“Oh mommy, oh mommy, why would you”); and DMX (Pharoah) reminding us that this actually exists. I don’t know if McKinnon’s Lorde and Strong’s Alanis Morissette are going to win any impersonation prizes, but Wells’s Zooey Deschanel and McKinnon’s Shakira held it down.

The one real bummer of the evening was “A Christmas Carol,” which hinges on Scrooge (Killam) learning he’s gay by way of the Ghost of Christmas Past (Thompson). It wasn’t necessarily offensive as a concept, but Fallon (as the young Scrooge) waving a handkerchief in a flurry of glitter and whining that he’ll “never cuddle with a big, beefy man — ever” just seemed kind of lazy. SNL’s writers this year have shown themselves to be capable of so much more than pussy/cat jokes, so it was a shame to see that this one made it in. (Especially since Chris Rock materialized during the good-byes — did they cut a Pharoah’s Rock-on-Rock bit and replace it with this? I’m not saying they did, but if they did, they should get the Ghost of Episodes Past to correct it.)

“Baby It’s Cold Outside,” the old holiday jingle with Rick Ross undertones, was turned into something fairly tame and sweet to close the sketch portion of the show: Fallon and Strong, on the set among poinsettias, tackle the song straight until it hangs a postcoital sharp left and he tries to convince her that it’s actually warm enough for her to catch the bus and go home. She’s reluctant (especially when he hands her a bag of trash to pop in the Dumpster when she exits) and eventually wears him down. Maybe I’m a Grinch because I’d still prefer to have replaced this with a wacky 10-to-one, but it was still a pretty successful sentimental sketch. And now, if you’ll excuse me, I’m going to take it on down to vacationville. Happy holidays!