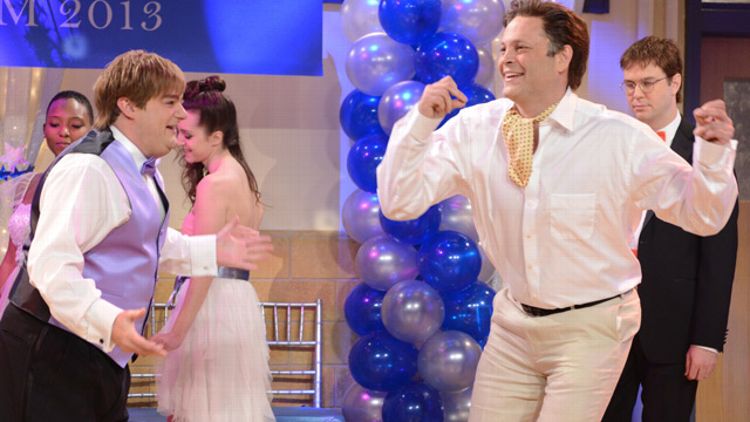 Still sickly unable to get over my disappointment at losing KDAY, a bright spot in Vince Vaughn’s Saturday Night Live this weekend was seeing Steve Jones — Sex Pistol and host of “Jonesy’s Jukebox,” first on the now-defunct Indie 103.1, then on KROQ — pop up in the best skit of the night (“History of Punk”). I have a serious affinity for Steve Jones, mostly because of “Jonesy’s Jukebox,” and I was really pleased to see him chilling at 30 Rock. Unfortunately, the sketch in which he appeared was one of the few high points in a show that had some notable clunkers (“Junior High Prom,” you pedophilic Great Gatsby alien, you). It wasn’t the worst episode in recent memory, but it was overshadowed by Melissa McCarthy’s episode last week for sure. At least the Weather Channel soap opera proved that there was something special about “The Californians.” That magic is tough to re-create.

Here I thought the cold open was going to be an official White House address about The Carters in Cuba, but I was wrong: Obama (Jay Pharoah) was taking on gun control and the Manchin-Toomey (Bill Hader-Jason Sudeikis) bipartisan compromise. As with many bipartisan compromises, this one dealt with important matters like keeping the number of guns fired at once to a limit of two per person, banning AK-47s from coin-operated vending machines, and severely limiting Papa John’s stake in arming American citizens. But what about CUBA? “Allow me to reintroduce myself; I’m the president.” Hader’s receding-hairline-cap was a joke in itself, but something about this sketch was a little lame. Vaughn’s monologue livened things up a bit by capitalizing on actual, freaked-out audience members as pivotal players. Vaughn hosted once before in 1998 (let’s see if it still plays, does kitty want to play?), and, back again to plug The Internship, he knows that the audience’s energy plays an integral role in the outcome of the show. He singles out Paige first, enjoying her face because of the “experience underneath those eyelids,” and saddles her with the responsibility of keeping the vibe up. Next is Poor Plaid Eric, whose jitters (“I’m very nervous”) is probably exacerbated by the fact that Vaughn pockets his iPhone just in case Poor Plaid Eric dared to turn it on or snap a photo at any time (“It’s OK to put the phone down and be part of the memory,” Vaughn informs him). Adrian, a distinguished gray-bearded man who has waited three years to get into SNL’s audience, is first labeled “a sailor and a gentleman” and then banished because “there’s a darkness in that man” (Bobby Moynihan is told to “give him a Drunk Uncle on the way out, make him feel good about it”). Adrian is brought back in exchange for Paige (“She’s a disease, Bobby”), but then she’s re-integrated because the plane of SNL needs fuel for takeoff. Those of us at home weren’t off the hook either, because the energy can be felt through the camera’s lens. Make ’em laugh or else. Vaughn’s excellent at improvising, and the monologue played to his strengths. He’s so charming that some people find it smarmy; I don’t happen to feel this way, but the sketch played to both camps.

Obviously I loved the “Al Pacino HBO Biopics” segment, during which my favorite Hader played Amanda Knox (petting his wig, “I’m a girl”), both Menendez brothers (making a very “strong choice” with the accent), Dr. Conrad Murray (in blackface, asking “Is this cool? Is this all right?” of a black judge, answered by a fist bump), and, if you can believe it, more. Also obvious is the fact that it was sponsored by the National Wig Alliance. I feel like I’ve been waiting for Hader to blow up to the degree that Will Ferrell has for a long time, and it looks like he’s got nine projects in various stages of development right now, so good for him.

Vaughn was absent from “Biopics,” and next popped up in the new Weather Channel soap opera, “Stormy Skies.” Maria LaRosa (Cecily Strong) and Mark Norcross (Vaughn) are getting humid on a sofa with some “heavy flirtation with a 100 percent chance of us doing it” when they’re interrupted by Tad Santos (Taran Killam), LaRosa’s husband (he feels a “strong gust of sadness” that will “work its way up before making landfall” in the valley of tears under his eye). Norcross is capable of sexual positions “in the high 60s — the highest 60,” but his wife, Janetta (Kate McKinnon), isn’t about to part with that tropical embrace, and if Norcross tries, she’s going to wear his “intestines as a necklace” (the rest of her threats were interrupted by an Emergency Broadcast test). LaRosa reconsiders and Mark is left with a three-day forecast of deep depression, maybe bouncing back a little by Tuesday. Dale (Hader) is reporting from outside in the rain, which brings with it “record levels of amnesia,” a photobombing Aidy Bryant in a slicker, and Al Roker (Kenan Thompson), who has just had sex with Janetta in Norcross’s bed (“that’s what’s happening in her neck of the woods”). The great thing about soap parodies is that they give the actors a ton to work with (and Vaughn did his part in that regard), but they just aren’t as easy to nail as one might think. “The Californians” may have gotten stale, but its specificity added to its punch. I don’t know if I felt like “The Weather Channel” tapped the mines enough, though it wasn’t for lack of trying (green-screen humor, what a niche). It was entertaining, but I thought there was more potential there.

“History of Punk” was a pre-taped short that was totally made for Fred Armisen, whose riffs on musicians (and one-man-show actors) are unrivaled. As the angry frontman of Ian Rubbish & the Bizarros, he’s the guy behind hits like “Hey Policeman” and “Living in the Gutter,” but he’s got a soft spot for Margaret Thatcher (“Hey, Maggie Thatcher, you’re all right/Thanks to you I sleep at night”). His bandmates thought he was being ironic, but according to Jonesy, “It turns out he just really liked her.” Where’s Vaughn? Not here, but that’s OK. This was a great way to handle Thatcher’s death last week. I’ll be spinning “Sweet Iron Lady” because “she wasn’t perfect, but who of us are?” Unfortunately, “Short-Term Memory-Loss Theater” didn’t live up to its great setup and premonitory Hader giggle fit: A production of the 1959 drama “Howl of the Landlord,” acted by performers with acute short-term memory loss, featured Hader as a doctor whose rehabilitation techniques come up a little short, even when he’s onstage to play the family patriarch and feed everyone their lines. Despite Vaughn and Armisen duking it out while staring at Hader for a clue as to where the plot was supposed to go, this one just didn’t land quite right.

Miguel was really great, despite the fact that Wiz Khalifa and Kendrick Lamar didn’t show up for a guest spot, and his rock-heavy renditions of “Adorn” and “How Many Drinks” were getting him even more Prince comparison notches than he already had in his leopard-print belt. Also, nice well-deserved mic-kick after “How Many Drinks.”

Weekend Update has been on a serious hot streak, so the fact that this week’s news break was a little underwhelming isn’t causing me too much concern. Special guests Brad Paisley (Sudeikis) and LL Cool J (Thompson) popped by to proclaim that they’d cured racism with “Accidental Racist,” with Cool J, the “most lowdown, hardcore cast member of NCIS,” explaining that he recorded the song because “when my man Brad called I answered the phone the way I always do: [ring!] ‘I’ll do it.'” Marina Chapman (McKinnon), the woman who was maybe raised by monkeys, also took a seat beside Meyers, but it felt like a watered-down version of Cecilia Gimenez, and the monkey hoots just weren’t cutting the mustard. Though now we all know what monkey-style sex is like. It’s not aspirational.

OK, “Junior High Prom.” Let’s sit on this bench with some air between us and talk about what just happened: Vaughn plays the wealthy benefactor of the junior high prom, whose impressive donations have piqued the interest of the faculty (Bryant, Thompson, and Hader) lurking behind the punch bowl. He shows up in Ray Bans (to hide those cue-card-hungry eyes?) and a designer jacket (“Liz Claiborne!”) and dances with the young male students, including Moynihan in a lavender vest and bow tie (seeing him jiving with Vaughn will surely cause the others to ask, “Who’s that cool boy dancing with that old rich man?”) and Killam (in order to incite jealousy in his girlfriend, Vaughn tells her mid-twirl, “You’re playing with fire”). Vaughn passes on dancing with Tim Robinson, then tromps back up the hill to his mansion. Whaaaa? I felt like there was some sort of weird message being transmitted in this sketch, but it remains elusive! It was creepy, but not in the good-creepy kind of way. What’s the hill? Who was that man? Why junior high prom?

Just after the awesome Pharrell-heavy Daft Punk Random Access Memories ad, which screened during SNL and at Coachella, we got a sketch that I can only guess was based on this YouTube clip of John Tesh introducing “Roundball Rock” with an answering-machine message. John Tesh (Sudeikis) and his brother Dave (Robinson), the family genius, arrive at the NBC office to pitch their jingle in front of various suits (Vaughn included) with the lyrics “B-b-b-b-b-basketball, g-g-g-g-give me that ball because I’m gonna dunk it.” When the execs want to hear the song without lyrics, Dave does his best to stifle his inner jockjammer but gives in after a few seconds (“it just seems incomplete” without the vocals; how will anyone know it’s about basketball?). After the executives draw a hard line, the Teshes break everything in sight with a hammer, including Vaughn’s coffee mug. This was probably the best work I’ve seen from Robinson, and not a bad sketch, but I was disappointed to see it during Vaughn’s week because it seemed like there might have been a better way to make use of him. Like with cat toys.

“Last Call,” which debuted during Louis C.K.’s guest spot, was a special sketch the first time around. It’s nothing if not a 12:50 a.m. sketch, but this reheated version was nowhere near as good as the original. Vaughn, in a toupee, takes over C.K.’s barstool across from barfly McKinnon at the end of what looks like a long night. Despite some good banter (“What’s on your birth certificate, Triscuit?” “Besides blended genitals?”), being aware of where this one will end up (imaginative spit-swapping) kind of ruins the joke that worked so well the first time around. Though it’s fun (I don’t know, I think so) to see McKinnon spit an arc of liquid into Vaughn’s mouth and then watch as she makes out with his chin and he with her nose (not as sensual as it sounds: “I think my south just seceded,” “that just gave me a derection”), I think this sketch might have been better left untouched. I do like two humans in one sweater, though. Cozy.

May 4: Third-time host Zach Galifianakis and Of Monsters and Men.