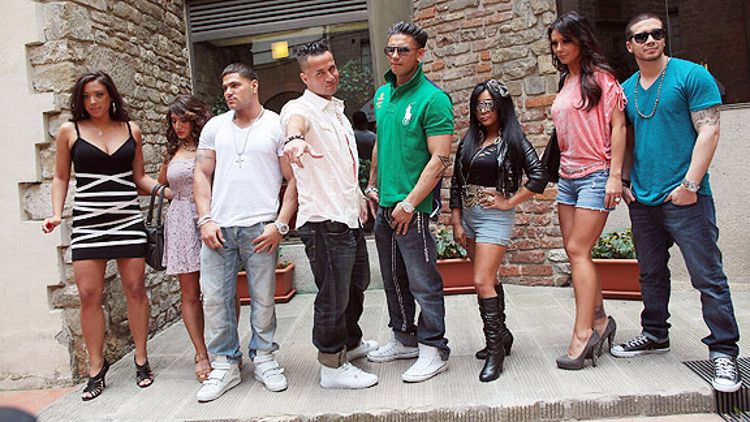 Jersey Shore needs to evolve or it will die. Sure, ratings are the highest they’ve ever been, and MTV and the cast are printing money, but to turn this short con into a long con, adjustments must be made. Ask Paris Hilton, Lindsay Lohan, or UGG boots — when the flashbulbs are firing the brightest, the praise is the loudest, and the money is coming in the money-coming-iniest, you’re in the most danger. You get complacent and believe in your own inflated value so much that you don’t anticipate the inevitable cultural recoil that will soon send you into irrelevancy, bankruptcy, or worse, Celebrity Apprentice. But don’t get bummed out, MTV Suits, Jersey Shore fans, or Snooki and the rest of the guido gang. We have six suggestions that will extend your stay in the zeitgeist and all the way at the bottom and in the bottom-right quadrant of the New York magazine Approval Matrix. OK, maybe the bottom-left quadrant. But New York readers aren’t paying your bills anyway. The people paying your bills aren’t exactly “readers.”

On the occasion of tonight’s Season 4 finale, here are our six suggestions for how to fix the show, listed in order from “OK, I could see that” to “man, they must do a lot of peyote at the Grantland office.”

1. Jersey Shore: Freshman Class
(Name-drop alert.) Scoop Jackson told me this insightful story about Gregg Popovich that I reference at least once a month and I encourage you to plagiarize. Popovich told Scoop that he acquired Nick Van Exel in part because he thought Nick was a good fit for the team but mostly because he knew that with Nick on the bench, Tony Parker would feel threatened and be more productive. MTV is Popovich, the Jersey Shore cast is Parker and Jersey Shore: Freshman Class is Van Exel … but way better looking.

The concept is simple: have a brand-new crazier, drunker, and sexier cast live in a separate house on the Jersey Shore and film their show simultaneously with the next season of the current show. It would be like Jersey Shore on steroi … wait, wrong phrase. This way MTV gets to maintain their current show (and ratings) on Thursday nights and keep the brand fresh without taking on the risk of revamping the current cast. Imagine how Snooki, Deena, J-WOWW, and Sammi would react when they found out that a younger, hotter, and guido-ier group of girls was filming an alternate Jersey Shore right on the same block? They would absolutely lose their minds. They would see Nick Van Exel waiting at the scorer’s table, panic, and start binge-drinking, fistfighting, and promiscuising their way up and down the boardwalk, and we would all just sit back and reap the guilty-pleasure benefits. The new cast of girls would be that Russian exchange student that came to your high school junior year. You know the one who wore her skirts just a little higher and laughed just a little louder than the girls that you knew since seventh grade? The men would go crazy for them and the women would do everything in their power to stop their hearts from pumping blood.

The tension between the old group and new group of men would be no different. They would start off bro-ish and cordial, pretending there wasn’t a Parker/Van Exel undercurrent to their relationship, but all it would take is one scuffed Air Jordan from a drunken stumble to turn Karma into the fight scene from Anchorman. When one of the newer guys with bigger muscles and iller-advised tattoos looked at Sammi for more than 15 frames, we’d finally see the long-awaited return of the One Shot Kid. I miss the One Shot Kid.

There is no chance that this concept doesn’t inject new life into the franchise, diversify the brand, increase ratings, double content time, and somehow lead to the deaths of at least three of the cast members. It’s foolproof. SallyAnn Salsano, get at me. I would love to be a PA on the first season of Jersey Shore: Freshman Class … and get a six-figure “consultant’s fee.”

2. Embrace the cast’s celebrity.
Stop trying to hide the fact that these people are uberfamous gazillionaires that have to sell T-shirts on a boardwalk to keep food on the table and booze in their breakfast. Own it. Let me see the hordes of gawkers, haters, and stalkers that follow them around like seagulls do a fishing boat. Let me see them in the green room at Letterman. Let me in the room where marketing execs pitch them on why they should be the faces of 63-Hour Energy. Let me meet their handlers, their security, and their friends that mooch off keep them grounded. The jig is up, MTV. We know what their lives are like, we see the thousands of people in the background, and we know what’s onscreen is far from the reality. Stop lying to us, MTV! Sorry, I got a little fired up there. My bad. Just stop pretending they still carry their luggage in trash bags and show us the Louis Vuitton suitcases with bedazzling that reads “Situation Nation.”

3. Give the show a new look.
Every show has to do something graphically to set itself apart. OK, not really, every producer has to do something that only other producers notice that they feel sets their show apart but really the audience could care less, they just want to see Snooki get drunk and fall down. The audience could care less if you used the same seagull shot from Episode 2 in Episode 4. When Jersey Shore launched, producers used fluttering segment titles and a grainy film look over montages. The segment-title thing worked and the film-look thing was whatever, but at this point it’s tired and what does old-timey film have to do with Deena Jersey Turnpiking everyone in a nightclub? They need to revamp the graphic package (they can afford it) and tie it back to the content. Put the segment titles on an open condom wrapper or a box of wine, or draw them into that lonely, pale, un-spray-tanned patch of skin where Deena’s butt cheek meets her thigh. As far as the grainy film look goes, just lose it. No one notices it except other TV nerds, and here’s a graphic effects ground rule in television production that we all should follow: “If a 7-year-old can execute it on an iPad, you shouldn’t use it on national television.”

4. Escape the Shore.
The cast is too comfortable on the shore. They should be going on weekend excursions. I would love to see them with their guido brothers in Long Beach, Long Island. They would go to Paddy McGee’s and learn that there is a meaner, darker, and just-as-performance-enhanced tribe of guidos just east of Manhattan (but close enough to Brooklyn and Queens that you have to be careful you don’t fist-pump too aggressively next to the wrong guy). Even better, I would love to see them in Manhattan outside of the Electric Room explaining to the doormen that they have table reservations and they know the owners while models that would only sleep with them as a goof receive air-kisses and entry with ease. The Florence experiment didn’t work because there was no intermingling with the natives. The fish were too far out of the water.

5. Smush Count
I want a running tally at the top of the screen that updates me on all the action that we didn’t see on-camera. We’re missing out on tons of cutting-room coitus. The first time you see a character (that’s what they are at this point, let’s be real here), there should be a freeze-frame that gives us their “stats.” It would look like the back of a baseball card. For example, when we see Snooki fixing herself a morning mimosa, action would stop and we’d see this:

Nicole “Snooki” Polizzi, Season 5
Hookups: 64
Actual Coitus: 14
Arrests: 1
Vomits: 3 (only one alcohol-induced; the other two were from a lack of alcohol)
Endorsement deals: 103 (just signed to Valtrex)

OK, you’re right. This isn’t a great idea. But it would really help score the GRTFL.

6. I asked Grantland editor and X Factor expert Jay Caspian Kang to come up with a fix for Jersey Shore and he went joyously left:

“I’d make Sammi gain 30 more pounds and change the requisite Sammi-Ronnie drama into the sad, sad mental degradation of a proud man who slowly realizes that now that the love of his life is a manatee with a weave, there just isn’t any reason to stick around. Then I’d make Ronnie knock up Snooki and make everyone still live in the same house. This would have two benefits. First, Snooki would have to stop drinking, which, on face value, might seem like a bad thing. But watching her try to figure out what to do with her time now that alcohol is no longer an option would be even better than watching her waddle around nightclubs. Second, Snooki v. Sammi would have rounds 2, 3, 4 and 5.”

A sober Snooki is genius. It would be like seeing if Bobcat Goldthwait were funny with a normal voice.

Filed Under: TV, How We'D Fix It, Jersey Shore, Mtv