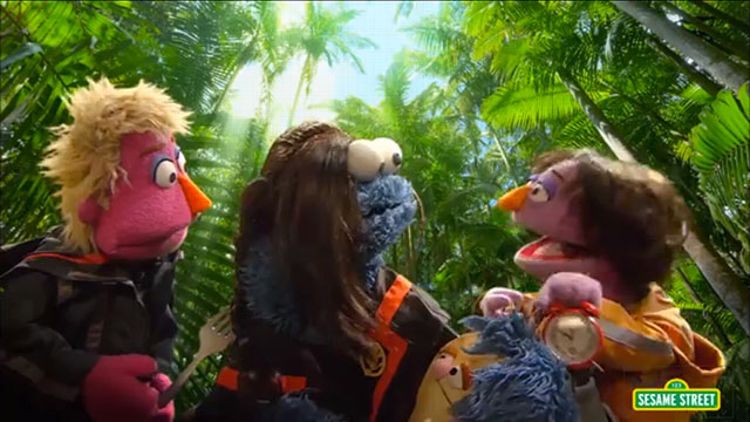 Every morning for the past three months I have watched The Best of Elmo. It’s only 30 minutes long, so I usually watch it two or three times in a row. I watch it again after dinner. After 300 viewings, I now can’t hear a tapping sound without humming “Happy Tapping With Elmo,” and whenever I see a face, I identify the parts of it in Ernie’s voice. I drink my coffee while Whoopi Goldberg explains to Elmo that she can’t pull off her skin and hair and trade it for his fur, and eat my bagels to the trippy tune of “In Your Imagination.” I have seen it more than any other film, television show, or commercial in my life; I have never wanted to see something 300 times, and if I did, I would not choose to watch Elmo. But I have no choice.

I see movies alone. I am happy to do so. Getting a babysitter and staring at your silent phone, waiting for it to light up in an emergency, is distracting. I have had to cut down on my movie theater quota and replace that time with the never-ending Elmo feature. I don’t know what makes Elmo so seductive to people under the age of 3, but it’s such a universal parent experience that you can identify your familiars at the grocery store (even when they’re without their children) because they’re picking up carrots and whispering “This is the song, la la la la, Elmo’s Song,” like they have been body-snatched and sent on a vegan zombie mission. But I forgive Elmo (and let’s not confuse Elmo with Kevin Clash, the third puppeteer to provide his voice to the puppet, who faced charges of sexual abuse a year ago) for taking such a giant piece of my brain and using it to reteach me what a nose is and what a person can do if it rains and they don’t have a driver’s license or the ability to read and drink wine. I like Elmo (and the rest of the Sesame Street clan) because he acknowledges the adults who are in a media hostage situation. You see:

Oh, yes. The Hunger Games. You’ve heard of it, right, parents? Did you manage to sneak out to see it when it was released? Did you go out with your significant other or a friend and share a buttery popcorn while you tried to convince yourself that the person to whom you had entrusted your child was capable of saving them from all of the hazards lurking in your home (3 inches of bathwater, finger-crushing baby gates, tiny marbles, a loose aspirin from under the bed, unlocked doors)? Or did you wait for the DVD release, crying on your crayon-stained sofa because children killing each other made your tender little heart warp like it had been microwaved for an hour? Maybe you pretended that you’d seen it, gleaning what you could from SNL parodies and press coverage, so that you’d seem like you still had a clue as to what was going on in the world. Sesame Street sees you like an Avatar Na’vi sees you. It’s winking at you. Like a kindly grandfather, it’s suggesting that you get out and have a date night for Catching Fire. It’s trying to fill you in.

Sesame Street has been spoofing for longer than I have had reason to care. A two-disc collection was released in 2011, but you wouldn’t know it if you weren’t already kicking it with Big Bird four days out of the week. Relating to your young child or toddler is easier than you’d think when it comes to experiences like cars, pumpkins, pineapple, and toys — the important stuff. I won’t waste your time by saying how lovely it is to see a kid make the connection between the color of the clouds at sunset and a camellia blossom, because what these spoofs seek to alleviate is the gaping hole of not being able to listen to “Stan” when it comes on the radio or having to rewind Eastbound & Down four times to [FINALE SPOILER!] understand what Sacha Baron Cohen is saying about his exposed penis on an airplane because you don’t want your sleeping child to wake up from a nightmare and bust in just as he offers to put his dick back in the “crib.” You were 3 inches from the television, palms sweating, Legos bearing witness from their heap on the floor.

Some children’s programming leaves you stranded on a desert island. The sand has been replaced with sickeningly sweet icing, and instead of palm trees, you get overbearing purple dinosaurs dotted across the alien landscape. It doesn’t acknowledge your presence in the audience, despite the fact that you aren’t likely to leave your toddler alone with your MacBook or the DVR remote. It’s rarer than you’d think to see a show that includes you in its demographic along with your kid, and maybe one of the repercussions of that mind-set is that what your child watches and what you watch cease to overlap. Are we meant to unglue ourselves from the screen and go play in the sunshine? Yeah, grandma, we know. But sometimes you and your short stack converge with conveniently matched needs: You want to watch Mad Men, and little Billy needs to learn about emotions:

The Street‘s parodies have placed the show on adults’ radar and enjoyed viral success in the past few years despite a limited PBS budget that prohibited them from creating an Adam Levine puppet for a parody of The Voice (they got the SVU “dun dun,” however, and the Dick Wolf seal of approval). Taking on everything from Homeland to Sons of Anarchy, the show sought to encourage parents and kids to view it together, but wound up amassing an even broader audience than expected; as it turns out, Usher’s crabby crawl has universal appeal. “Hey kid,” you say, “wait until you’re old enough to hear Usher talk about how lost he was without his boo. Maybe zoomin’ is how he coped.”

The celebrity cameos on Sesame Street predated its digital parodies, but they, too, had the effect of creating inclusiveness for parents. When James Gandolfini died, I rewatched his guest spot, in which he talked to Zoe about the three things that scared him: the dark, haircuts, and giant talking vegetables. Gandolfini was a parent to two, and the fact that he was on Sesame Street said something good about the kind of parent he was: You just knew that he had memorized the tune of “Elmo’s Song.” Somewhere between Tony Soprano fearing evil carrots and that beefy grown-up stranger shrinking from the same is a humor that you can share with a person who barely speaks your language.

It will be years before you can watch Hannah and Her Sisters or The Godfather together. You’ll never sit through an episode of Girls or The Sopranos in the same room, and your progeny are going to taunt you mercilessly for having Animal Collective and Broken Social Scene playlists. But you watched the Gandolfini clip somberly together, and you didn’t hesitate before you played another go-round of “Homelamb.” It’s a shared moment, the difference between just turning something on and watching a program together. And it’s why Elmo’s accomplice on Elmo’s World wasn’t pulled from the non-union pool, and was instead played first by Obie and Tony Award winner Bill Irwin and then by another esteemed character actor, Michael Jeter: This is a show created, sympathetically, for the people who haven’t seen a film on its opening day since their previous lives.

As a parent, you want to learn how to teach. You don’t know why Elmo became such a central figure in your kid’s life; he saw an animatronic Elmo doll once and became hooked immediately, then learned the difference between heavy and light from him. You followed suit by becoming enthusiastic. It was the least you could do, really, because what interests your child is inherently interesting to you, at least upon first viewing. The element that sometimes remains elusive is making those experiences accessible to anyone else. Suddenly, the things you care about feel insular in the parent zone: circles, noses, how and if to open doors. What a relief it is to know that you weren’t the only person to see the crabby crawl. It really was well executed.