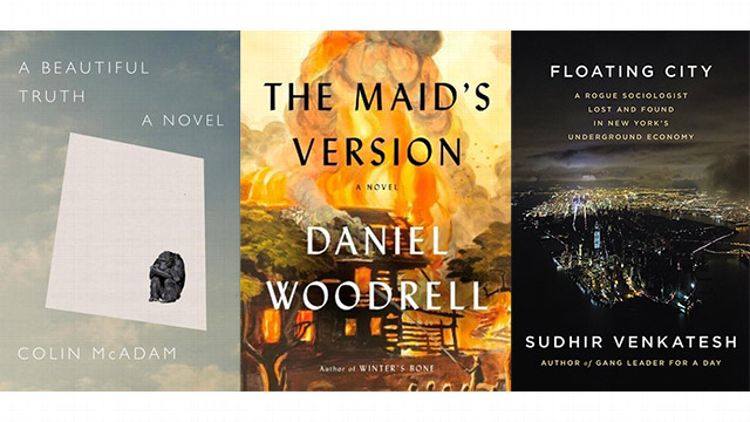 A Beautiful Truth by Colin McAdam

I recently watched a great documentary called Project Nim, about an Upper West Side family of academic hippies who adopt a chimpanzee in the early ’70s. Their goal is to condition the young ape to communicate with humans by raising him as a normal human child. The controversial experiment ended when Nim attacked one of his caretakers, the chimp portrayed as a tragic victim caught between two worlds. Colin McAdam’s third book is based heavily on the real-life Project Nim, novelized to push the philosophical lessons of Nim in a way only fiction can do. In A Beautiful Truth, a Vermont couple named Walt and Judy decide to adopt a young chimpanzee after Judy is unable to conceive a child. Young Looee arrives in a crate from Sierra Leone, and the two — in Nim-ian fashion — raise him as the son they never had.

Structurally, the story splits its time between the perspective of Walt and Judy (and later, other humans), and the chimps in a Floridian research institute, where Looee ends up after his violent episode. One might expect the chimp point of view to be distracting, but it speaks to McAdam’s talents that they become the most compelling parts of A Beautiful Truth. Looee’s chapters — short but lyrical — are often the most affecting.

The central tragedy of the novel is how Looee has been raised as a human, convinced so much that his consciousness believes that he is human. And yet it is this misunderstanding, the humans’ unwillingness to ever treat him as anything more than a chimp while forcing human values on poor Looee, that is most troubling. It’s David, a researcher at the biomedical lab in Florida, who performs the cruelest tests on Looee and yet seems to understand his simian subjects the best:

David believed that there was value in trying to communicate with other apes, but that more could be gained by trying not to fit them into human culture. Seeing how they communicated among themselves seemed a less narcissistic sort of inquiry than trying to make them communicate with us.

It’s a dark lesson in family, parenting, and community — the way we impose our ideals on others seems to be the beautiful and horrible truth of human nature.

A few years back, sociologist Sudhir Venkatesh published Gang Leader for a Day, in which he explored the inner workings of gangs in Chicago. I’m familiar with Venkatesh’s work from his column on the Freakonomics blog “What Do Real Thugs Think of The Wire?” in which he watched Season 5 live with older gangsters and let them verify the authenticity of the show and make predictions about what would happen (from the very first episode they call Prop Joe getting whacked). Venkatesh is an outsider, an academic at heart, and yet he has a gift for striking a rapport with people who happen to work in illicit industries.

In Floating City, he’s exploring New York’s informal economies, focused mostly on the city’s sex trade. Disturbingly, and not surprisingly, the same capitalistic forces that create class issues are prevalent throughout illegal markets too. A drug dealer named Shine, who is Venkatesh’s main entry point into the underground, struggles to get into the high-end cocaine business because all of his connections are in the lower class. On the other hand, Venkatesh reveals that not everyone who becomes a prostitute is necessarily poor. Two of the most interesting people he talks to are Analise and Brittany, who become sex workers as a means of not having to depend on their family fortune.

But what is the common thread throughout New York’s informal economy? It seems that it’s not necessarily the need for money, but the way people spend it. Venkatesh watches Shine and two Hispanic prostitutes pop open bottle after bottle of an expensive champagne they can’t afford. He writes, “Was this the dark secret at the heart of the American dream? A Roman level of thirst and self-loathing?” The struggle to survive is often what drives people into the sex trade but it’s a longing for more that keeps them trapped there; at the same time, the entitled cravings of the upper class create the demand for these black markets.

For me, the most compelling part of the book is at the end when Venkatesh interviews several regulars at a brothel. Almost all of them are interested in talking about their experience with prostitutes as a way of creating a community around their lust and to rationalize that what they’re doing isn’t harmful. Here’s Venkatesh talking to a businessman named Nate:

Nate goes on to justify his craving for “lithe women” by talking about how difficult his marriage is, how his need for comfort outweighs any harm he is doing by frequenting the brothel.

It’s amazing how we can just look the other way when we’re getting the things we want. In fact, the people and places of Floating City represent a system wherein everyone is looking the other way.

TL;DR: To invoke The Wire again, “the game is the game”

The Maid’s Version by Daniel Woodrell

Even with the 2010 film adaptation of his novel Winter’s Bone, Daniel Woodrell remains one of America’s most underrated authors. He writes with economy, building sturdy sentences and supporting them with subtle hints of lyricism. But Woodrell’s strength is knowing how to use individual moments to tell a story. The Maid’s Version is Woodrell’s first novel since Winter’s Bone, but it has more in common with his last book, an excellent short story collection called The Outlaw Album that features a dozen gritty vignettes of Ozark violence. The Maid’s Version takes a Faulknerian distance to frame its narrative, cobbled together from the memories of Alma DeGeer Dunahew, who is addressing her 12-year-old grandson Alek.

Like Winter’s Bone (and most of his work), The Maid’s Version is a robust piece of Southern gothic lit. As with all noir, there’s a crime at the center of everything. In the town of West Table, Missouri, an explosion at the Arbor Dance Hall (based on a real tragedy in West Plains in the 1920s) kills 42 people, including the narrator’s sister. The official investigation never turned up any conclusive evidence of what caused the fire. Alma’s recollections move across several generations of townsfolk and family in an attempt to piece together the culprit, and she reveals decades of family secrets and a wealth of sinister motives for what might’ve transpired at the dance hall.

As much as Alma’s memories piece together the mystery behind the explosion, The Maid’s Version becomes much more about a town coping with tragedy. Suspicions contaminate the minds of West Table’s survivors, and Alma witnesses a community whose pain turns to anger.

All of this happens in 164 pages. The Maid’s Version is one of America’s best writers at the top of his game.