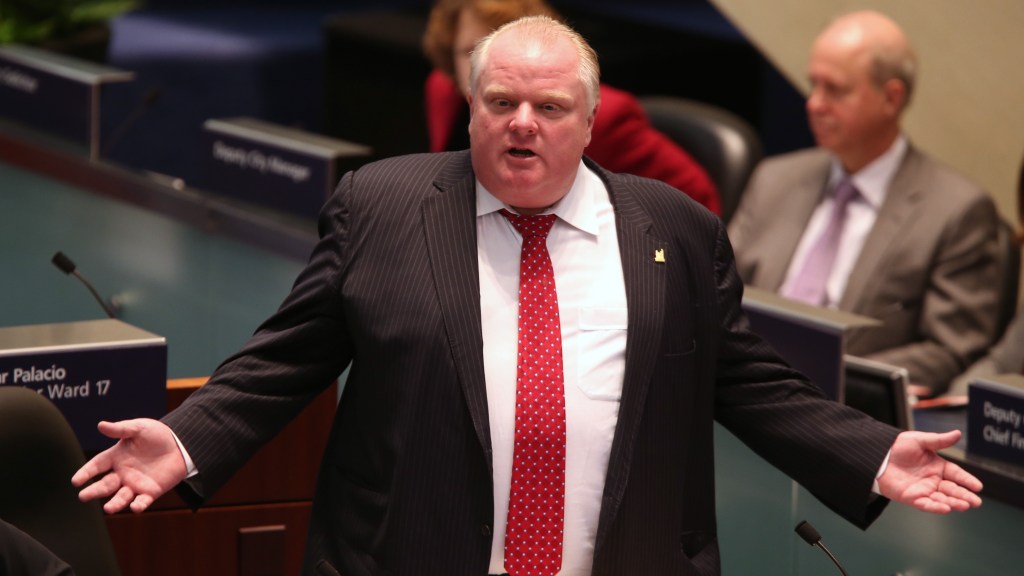 Rob Ford is Toronto’s troubled ruler, the one who found himself the target of allegations of crack cocaine usage in early 2013, which he denied for months before copping to in November. And Jimmy Kimmel, of course, is the very last man you want to publicly converse with when you find yourself in such a precarious position. But there Ford was on Monday night, beet-red and ready for a hearty 15 minutes with the man who twerk-pranked the world. Let’s rank the most awkward moments. 6. Kimmel attempting to get an explanation of Ford’s greatest hits, including Ford’s pro-wrestler-ish beatdown threat and his questionable Jamaican patois. “There’s no secret, I have a lot of Jamaican friends, and that’s how we speak in a private setting,” Ford says. “Someone wants to tape me, they can tape me.” (1:30 in the above video)

5. Kimmel reading about 30 straight seconds of vicious complaints and allegations about Ford, stuff like, “I hope you remember that clown you’re about to trot out is a very sick, very bad man.” (2:10 in the video below.)
https://www.youtube.com/watch?v=Nzbq7iBvoJs

4. Kimmel, right after that, asking Ford if he is indeed homophobic. Ford chuckles merrily, denies, and counters with, “Are you?” Mature. 2. Ford appearing uncertain about the governmental delineation between Canada and the United States of America, referring repeatedly to his Kimmel appearance as a service to “the taxpayers here.” (Later, expressing frustration about Toronto police following him around, Ford tells Kimmel: “It’s your money, Jimmy.” Well, it’s … not?)

1. The part where Kimmel gets real and tells Ford, “If you are an alcoholic [Ford chuckles] — if you’re drinking enough that you can try crack in your forties and you don’t remember it, maybe that’s something that you might want to think about, like, talking to somebody about.” Ford’s response: “I wasn’t elected to be perfect, Jimmy. I was elected to clean up the mess that I inherited, and that’s exactly what I’ve done.”
https://www.youtube.com/watch?v=BfhmjPRpsTg