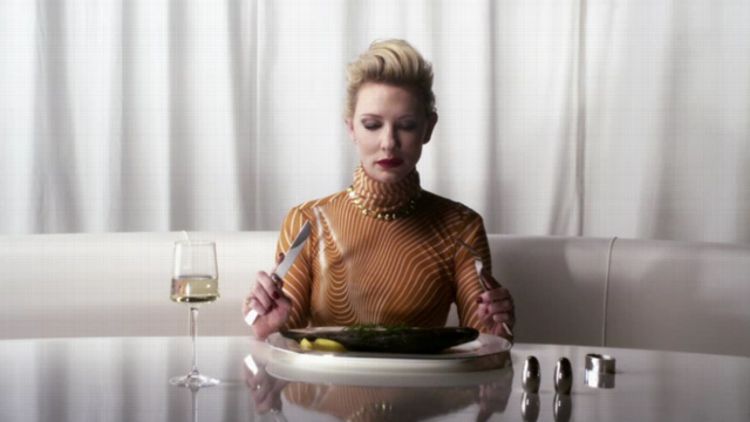 While others mark the holidays by traditional, picturesque heralds like the changing leaves or first snowfall, in Tinseltown they track the shifting seasons with Oscar campaigns. And where the natural world has the winter solstice, Hollywood has something just as portentous, and far more baffling: The New York Times Magazine’s annual bizarre video shorts in which Oscar hopefuls dance like HD monkeys in abstract video cages. Every year, I watch these videos because they pop up on the Times homepage. Every year, I think C’mon, they’re a minute each, where’s the harm? And every year I realize how precious a minute of my time can be. Are these inscrutable curios art, intellectual parody, or just a joke no one really gets? I still haven’t figured it out.

This time around, master cinematographer Janusz Kaminski was chosen to dress up one-line non sequitur scripts by the likes of Spike Jonze, J.C. Chandor, and Nicole Holofcener in lens flares and color-coordinated chiaroscuro. But if they’re going to insist on continuing to put these precious, A-list-packed little baubles of absurdity out into the world, then I shall don my amateur critic hat and be as high-falutingly obnoxious about them as possible. Let the reviews commence!

Logline: Cate Blanchett orders the fish.
Inspiration: “Show me where the bed is, put a blanket over me, and don’t ever let me see you again,” by Andrew Bujalski

You can justifiably claim that Cate Blanchett’s so luminous you’d watch her read a Yelp review and weep. Unfortunately, that does not extend to pseudo-absurdist mash-ups of a Gordon’s fish sticks commercial and an Elizabeth Taylor perfume ad. I’m guessing the goal here was to create the most incongruous conjunction ever by juxtaposing faux-Buñuelian irony with the mumble-core rhythm of Andrew Bujalski’s line. The fish symbolizes quality!

Logline: Bradley Cooper splashes a big puddle.
Inspiration: “I’m broke. I mean it. Don’t laugh. It’s all gone. Seriously, I got nothing left. But I still got this. What’s it worth to you?” by J.C. Chandor

Lost outtake from a Michael Jackson video? Rejected Stomp ad? No, I’d say this is more a hybrid Singing in the Rain–2001: A Space Odyssey tribute. You have to admire Bradley Cooper’s commitment to direction that must have been along the lines of “You know that fountain statue down in the lobby? Do that!” And he really connects with his delivery of “I’ve got nothing left here.” I’m guessing that was a candid venting of frustration after a day spent in waterlogged tuxedo pants.

Ah. Redford. Is there anyone else who could sell, by sheer force of cragginess, slicing a loaf of bread as if it were the chariot races from Ben-Hur? And if we get Seth Rogen and Evan Goldberg to write the line, then it will be, by definition, funny! Seth and Evan probably knew they’d have no quality control over this and banked on the inherent humor of the word “tofu” to power through. You can almost see the tears on Sundance’s face as this experience drives him to carb-bingeing.

Logline: Oprah Winfrey spouts nonsense into a microphone.
Inspiration: “So you died while I was out. How convenient. I thought it would be easier if you were dead. But actually, it’s just irritating,” by Sarah Polley

Fabulous Baker Boys meets Dream Girls has at some point actually been pitched to multiple studios, I’m sure. Now thanks to Oprah and the Times, there’s a demo reel to go with it. The overly self-aware irony is missing in this one, replaced by a lazier hard-boiled ennui. Though I suddenly have a burning desire to watch late-era Judy Garland. But it’s amazing how one minute can feel so much longer than all of A Star Is Born.

Logline: Greta Gerwig gets really scared by taxidermy.
Inspiration: “You look like you want to say something. But don’t. That look on your face is so different now,” by Julie Delpy, Ethan Hawke, and Richard Linklater

Now I can cross seeing the Before trilogy as reimagined by Stanley Kubrick from my bucket list. Is Greta Gerwig channeling her inner Shelley Duvall, or is that look of horror because she mistook the red wallpaper for a high-priced brunch spot, only to stumble unaware into this video shoot? And did Ethan Hawke, Julie Delpy, and Richard Linklater really all reunite to come up with that one line?

Logline: Forest Whitaker writes a fantasy.
Inspiration: “People are always telling me, ‘It’s so messed up what she did to you.’ Whatever. It’s all in the past,” by Greta Gerwig

Boy, Forest Whitaker lucked out with this one: It has some semblance of sense. Then again, it just goes to show how interchangeably bland watching writers type onscreen really is. (Though in real life, there’s a lot more two-day-old coffee cups and Trader Joe’s olive oil popcorn.) But it’s a testament to Whitaker’s powers of emotional authenticity that he not only made this semi-coherent, he made writing look sexy and romantic! Jesus, that guy can act.

Ah, the Art Deco femme fatale. It’s not surprising how easily Julia Louis-Dreyfus pulls off that look. It’s just disheartening that somehow they managed to totally bury her infinitely expressive face for an entire minute. I didn’t think it was possible to suppress her caustic wit so fully with an empty conceit. There’s a post-structuralist sign-signifier comment in here somewhere.

Logline: Michael B. Jordan does a Western.
Inspiration: “Well, recently I found out that I am alive. And I guess it’s a lot to take in. I didn’t realize exactly what it all entailed. And I really didn’t know it was going to be so incredibly sad,” by Spike Jonze

Kanye wants his green screen back. And so do Seth Rogen and James Franco.

Logline: Oscar Isaac was murdered by a Razr.
Inspiration: “I hope this is a joke,” by Lake Bell

Lake, you took the words right out of my mouth.

Logline: Chiwetel Ejiofor wakes up.
Inspiration: “How long have you been waiting there?” by Jeff Nichols

Now this is just lazy, Times Magazine. You get your hands on a luminary like Chiwetel Ejiofor, and all you can think to do is have him wake up in a bed? No symbolic fish, or soaring eagle b-roll; hell, even the Art Moderne furnishings feel poached from a garage sale. What happened: Did you fall asleep watching deleted scenes from L.A. Confidential? Honestly, you’re not even trying anymore.

Logline: Adèle Exarchopoulous jumps and pouts at the same time!
Inspiration: “They call me sexy, smart and sociopathic. But not necessarily in that order,” by Danny Strong

Ever wonder what an episode of The Man Show as directed by an obscure French New Wave director would look like? Today’s your lucky day: This is the most sensuous girls-on-trampolines segment possible. It’s funny how the French subtitles and sultry looks make me buy this random, pointless video as a unified conceit. It makes you really want to reexamine the French New Wave.