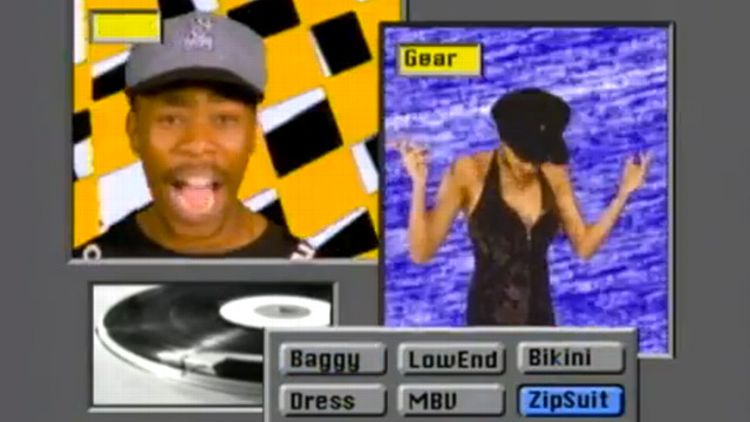 Welcome to our new series, Rembert Explains the ’90s. Unlike the source material for our previous, ’80s-themed series, these videos have been seen countless times, with the result being an unparalleled, almost embarrassing level of expertise. Rembert will write down his thoughts as he’s watching the video, then we’ll post those thoughts here. This week’s installment was selected by Grantland editor Mark Lisanti: “Scenario” by A Tribe Called Quest (1992). If you have an idea for a future episode of Rembert Explains the ’90s, e-mail us at hollywood@grantland.com.

0:03 This is one of my earliest meta-technological memories.

Watching a television that was showing some sort of future-computer music video game program. I couldn’t handle that. Barely can now.

This shot was most certainly my introduction into browser tabs. Also: hello there, Busta.

0:28 Unrelated to the video, but few songs start stronger than:

This video was the inspiration for GarageBand, Photoshop, and Minority Report. So important.

It’s easy to become mesmerized by the rapidly changing faces, but every now and then a quick pause shows a familiar face. Like this guy:

And he still hasn’t made the old-school Taco Bell reference yet. 1:03 “HEAD FOR THE BORDER, GO GET A TACO.” – PHIFE DAWG

1:14 I can’t stress enough how much the centerpiece of this video is the organization, minimization, and prioritization of computer windows. Case in point:

1:31 There’s just so much going on. Look at all those knobs and letters and numbers and acronyms.

I’m trying to think of a more technologically complex rap video, but I can’t think of one, because there isn’t one.

Also, it’s worth admitting during this scene, for a third time I forgot this was a music video and attempted to click on one of the tabs (“Comp”) in hopes that it would take me to another screen. But that’s just not how it works.

Studying and attempting to re-create the “Scenario” video should be a prerequisite at every art school in America.

1:51 In addition to being the legendary posse cut, it’s also a classic video in the genre, “20-plus people in the background, just kicking it.”

One of our best genres.

2:01 In case you were wondering if Dinco D said “rates more than four,” thankfully we have the video to provide us with inarguable proof of the lyrics:

Four fingers and a vertical rating scale of four with “more” above it. So yes, that’s exactly what Dinco D said.

2:32 In case you forgot, “Scenario” is brought to you by Leader Quest.

This is a reference to A Tribe Called Quest and Leaders of the New School, and later, an organization dedicated to IT training and management solutions.

2:34 They really should have made “Auto Ali” action figures.

I would have thrown away all those Power Rangers in a heartbeat.

2:49 Legends, before they were legends.

2:55 Three tabs are now open, with priority, appropriately, going to the Earth.

It’s startling how much of my current laptop activity mirrors a music video that came out 21 years ago.

3:00 What happens for the next few seconds, during “TipSync,” with the “flow” and “track” bars and them being aligned until Tip stops rapping but the track continues, and the error red dot — it’s simply one of the more genius, seemingly throwaway additions to a music video I’ve ever seen.

In a video full of clever, smart inclusions, that’s perhaps the best one.

One of the best rap verses. Ever.

3:15 Ignore that previous posse scene, this is the ultimate:

3:17 Busta has to be disappointed that 20 years have gone by, and we still haven’t figured out how to make movable text, stone, and checked long-sleeve shirts.

3:41 I was always a little bummed, once we made it to the Busta “Place” level.

I love urbania, suburbia, and outer space as much as the next guy, but we never got to see Busta in Serbia. It just seems like a missed opportunity. For Serbia.

4:02 There’s no better way to close it out, than with a little censored profanity.

Whenever rappers are about to curse, they should just maximize their censor-autotune window and bring it up to the middle of the screen and then when they’re done swearing, just simply minimize it. How hard is that, Tyga?

This video will hold up. Forever.