Rembert Explains the ’80s: Murray Head, ‘One Night in Bangkok’ 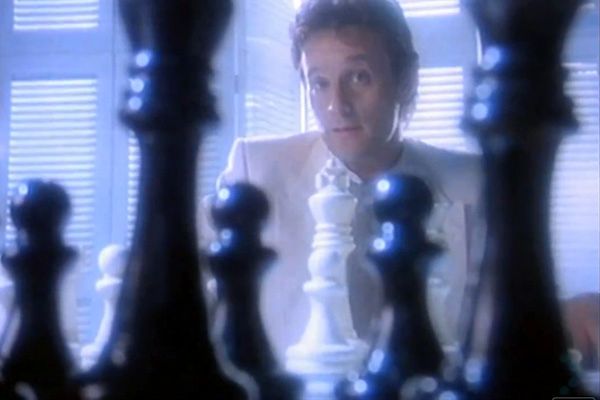 Welcome back to our series Rembert Explains the ’80s. Every so often, we’ll e-mail 25-year-old Rembert Browne a video from the 1980s that he hasn’t seen. Rembert will write down his thoughts as he’s watching it, then we’ll post those thoughts here. This week’s installment was selected by Hollywood Prospectus editor Mark Lisanti: Murray Head’s “One Night in Bangkok.” If you have an idea for a future episode of Rembert Explains the ’80s, e-mail us at hollywood@grantland.com.

0:15 Please say this entire video is about squares. Weirdly, that would make my life so happy.

0:18 I was so distracted by the artistic nonsense in the video that I failed to realize a song was playing.

0:25 The music sounds like the soundtrack to a movie battle scene, and, simultaneously, a Michael Flatley routine. This is awkward, because I have a feeling a love story is about to develop.

0:30 A man has entered the arena, dressed in his finest Tom Wolfe threads.

0:36 Yes, we are 36 seconds in (15.3 percent of video) and not a single word has been spoken by our characters, nor have any lyrics accompanied the fugue that’s loudly playing in the background. Interesting.

0:48 So these are Murray Head/One Night in Bangkok’s first four bars (he’s rapping, by the way):

Bangkok, Oriental setting
And the city don’t know what the city is getting
The crème de la crème of the chess world
In a show with everything but Yul Brynner

0:54 In his next four bars, he mentions something about “chess boys.” And then this happened:

1:01 I think this whole video is about him spitting game at her:

By way of chess-related metaphors. Is this his idea of a first date, or is this his version of “Ignition”? Maybe this song is super sexy and I JUST DON’T GET IT.

1:16 Oh, and there’s my racial insensitivity. Right on time.

I’ve been waiting on you, too.

1:34 This guy, Murray Head, kind of reminds me of Prince, in the sense that he has a Revolution behind him. You know, these guys:

And we couldn’t forget The Mamas and The Papas:

I’m suddenly more interested in the supporting cast than in the star of the show. It’s like Happy Endings, but with poorer video quality.

1:39 Ugh, that was such a tease. Stupid Murray Head is back, sans Revolution, doing that rapping thing again.

1:45 So these Bangkokian “scenes” they’re showing are starting to get ridiculous. I mean, call me old-fashioned, but this seems a bit much.

Get Thai’d, you’re talking to a tourist
Whose every move’s among the purest
I get my kicks above the waistline, sunshine

SHOW US HOW YOU REALLY FEEL, MURRAY:

So, this guy is the worst. Not only did he go with “Get Thai’d,” but he coupled it with this image. You know what, Murray Head, you can’t get away with this kind of stuff when you’re that bad of a rapper. You can’t ride the beat to save your life. No disrespect, but you make Silkk the Shocker sound like Bun B.

Hopefully you’ve gotten it out of your system now.

I’m tapping out for about 20 seconds. One can only take so much on a Thursday afternoon.

2:25 So here’s the thing: I’m still mad, but there’s this flute playing that is just dominating.

2:27 Oh yes, this just became a flute solo. This is magical. Does it make up for the lack of tact when it comes to mocking other people’s cultures? No. But I’d be remiss if I didn’t give a shout-out to the flautist behind that impeccable solo.

2:50 I won’t even lie, I’ve put this song on mute. This flute has me listening to “Big Pimpin'” and it’s great. Sorry, Murray Head, but you’re just no match for SHAWN CARTER ON A YACHT.

3:09 Feeling guilty for some reason, I turned back to Murray Head. I figured I’d give him one last chance, maybe he turns it around at the end. What say you, Murray?

So you better go back to your bars, your temples
Your massage parlors.