Rembert Explains America: Putting It All on the Line on Pre's Trail 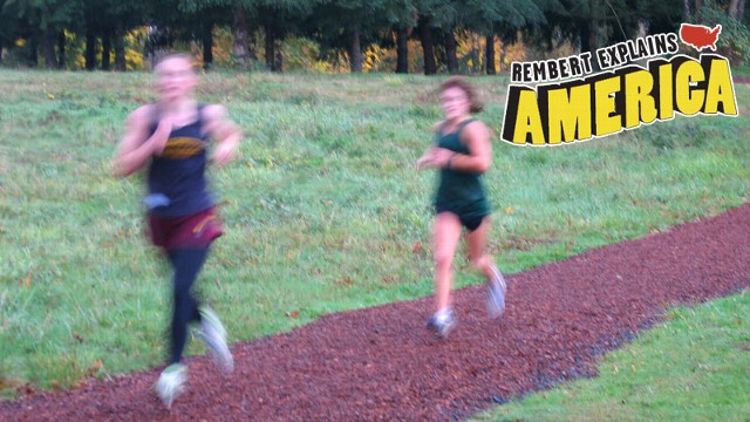 Setting sail on this trip in early June, I had a plan. In addition to writing and scavenging, I would use this time on the road as an opportunity to finally get back in shape. And in order to do this properly, I was going to develop a schedule, one revolving around fitness. Stretching in the morning, playing some sport every day, post-work runs — they were all part of the plan. I was even set on purchasing a fold-up bike to have in the trunk as a nice way to see places while getting a workout.

Operation Spring Break ’05 Bod was also bleeding into my editorial plans. One of my ideas was to accomplish the annual bike ride across Iowa, RAGBRAI, and if that didn’t work out, to perhaps do a Tough Mudder and write about it.

These plans were all I could think about as my friend Owen and I arrived at the University of Oregon’s Autzen Stadium in Eugene.

The past 10 weeks were supposed to be about the return of treating my body like a temple. Unfortunately, somewhere along the line (the place where a line begins), that holy structure became a sanctuary for fried food, car sitting, and Big Gulps.

So many Big Gulps.

A supercut of every meal I’d had raced through my mind as we parked the car and began to get changed.

Here I was, a young man, having daymares about America’s biggest hamburger and the South’s best ribs. Thinking back on all the food suggestions I’d gotten and how not a single one centered around vegetables. Having flashbacks to Lafayette Coney Island and Slows Bar BQ and Acme Oyster House and Off-Site Kitchen.

I regretted everything, from every single meal in Texas to the previous night’s debacle in Grants Pass, Oregon. Was it imperative that I order fried oysters and a clam chowder bread bowl? Was it?

Dressed like athletes, we abandoned the car and walked into the woods. I felt as if I were walking the plank. How’d I let myself get to this point?

All I could think about was coming home for Christmas 2012, walking around shirtless, my standard state of affairs in my home since I was zero, and leaning against the wall and having my mother point at my slight belly, saying, “Well, that’s a new development.”

I should have nipped it in the bud right there. I should have immediately walked outside and run from Atlanta to Birmingham. But I didn’t. I simply gave her the “Mommmmmm” look, walked into the kitchen, and heated up some leftover pot roast.

And now, eight months later, here I was staring at the place of my demise, a woodchip path in Alton Baker Park. It was Pre’s Trail, a three-loop path with interlocking segments named after famed runner Steve Prefontaine. We were in Eugene for the sole reason of running this historic 4.07-mile trail.

My friend Owen also hates running, but he exercises frequently. This wasn’t going to be hard for him. But he wanted me to do it, because he knew I needed to do it.

Because that’s what friends are for.

Also, because friends are cruel, he wanted to see me suffer. Half confidant, half drill sergeant.

So without much warning, Owen started running. And, fearing the worst, I followed.

The first few minutes were surprisingly splendid, less because of what was happening to my body and more because of the scenery alongside this trail.

Pre’s Trail was beautiful. A perfect place to lose yourself in a run.

But then it started to hurt.

After a long period of time without distance running, you really lose sense of a mile. Time begins to have no real meaning. And eventually, it feels like 15 seconds pass between each step, and after 20 of those steps, you think you’ve traveled a mile.

After weaving through fields, passing by houses on the river under a clear sky, we took a pit stop. I was winded, but thankfully I could tell we were almost done. There were five very real moments where I wanted to stop, but I pushed through and kept going. Maybe I wasn’t in such horrible shape, I thought. Yes, I wasn’t feeling great, but if I could still knock out four miles without breaks, things weren’t so bad.

“How much do we have left?” I asked Owen, as he stood upright while I crouched over, searching for air I was hoping I’d find around my knees.

All I could think about was the chili-cheese dog I’d eaten at Northern California tourist trap Confusion Hill. That and a root beer float. Why not just get a root beer? Or, I don’t know, a cup of water and a chicken breast?

NO ONE WAS POINTING A GUN TO YOUR HEAD, FORCING YOUR CHILI CHEESE DOG AND ROOT BEER FLOAT HAND.

“Just three more of those,” Owen said, as we started again.

Just. I hated him.

I wanted to be mad at the world, but occasionally I was distracted from my own demise by the beauty of Pre’s Trail. I knew I’d be crying if I were on a track instead.

After what seemed like another 45 minutes, we stopped again. My lower back was gone, my arms had turned to linguini, and there was a fire ablaze in one of my calf muscles.

“Two miles, we’re halfway done,” Owen said. I wasn’t looking at him, because my head was against a tree in the shade. I was embarrassed that this was taking such a toll on my body.

I’m not 19 anymore. No longer could I eat an entire General Tso’s chicken to-go order and then walk out on a tennis court and play three sets. That was no longer my reality.

Instead, my reality had become simply eating General Tso’s. And then falling asleep.

Deliriously laughing at my own pain, I looked over at Owen.

Push-ups. You had to be kidding me.

Once he was done being Shaun T, we started running again.

I don’t remember much from this final leg. Owen, sensing I was in a dark place, began striking up conversations that only old friends could have, desperately trying to get my mind off the horror that was Pre’s Trail and jogging as a form of cruel and unusual punishment.

• He said something about Drake and all I remember mumbling was “Aubr.”

• He said something about getting food and all I remember mumbling was “Sandwi.”

• And he said something about breaking into the Nike complex in Beaverton and all I remember saying was “Heist.”

My soul had left my body. I was nothing more than a husk, struggling to make it back to our starting point.

Eventually, an unknown amount of time later, we did it. We made it back home.

Somehow, we missed part of a loop and only ran a total of three and a half miles — 3.49, to be exact. There were a lot of emotions upon crossing our finish line, most centering around the fact that I never wanted to feel like this again.

But despite all the pain, it felt good that Pre’s Trail was the beginning. It’s a special place and, even though I articulated some of my most vile thoughts while making my way through the loops, ultimately I was thrilled that the return of a healthy lifestyle began in a place with some meaning.

It incentivized the possibility of a Day 2.

Update: Today is Day 2. I haven’t put a single unhealthy thing into my body. Because I can’t move.