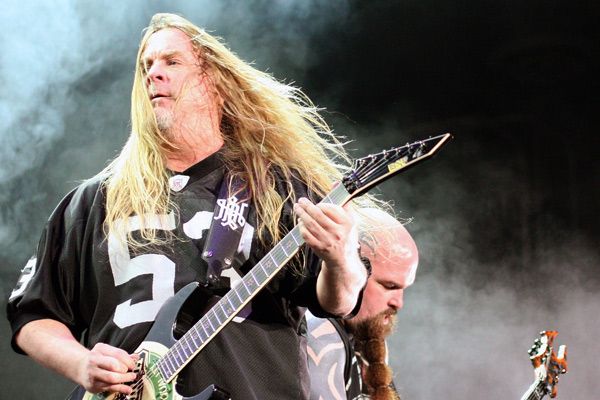 A founding member, guitarist, and songwriter for Slayer — arguably the most important thrash metal band ever after Metallica, and among the most influential groups of any genre from the last 30 years — Jeff Hanneman died Thursday of liver failure in a hospital near his Southern California home. He was 49.

Before his death, health problems had kept Hanneman off the road and out of the studio for two years. In 2011, Hanneman contracted necrotizing fasciitis, a rare “skin-eating” disease that wears away skin and tissue at an accelerated rate. This rare, horrific condition — which Hanneman most likely caught from a spider bite, no less — prompted numerous jokes online about Slayer’s guitarist suffering from a very Slayer-like ailment. But Hanneman was truly in a bad way; he almost lost an arm, and lapsed into a medically induced coma for a short period. And yet he appeared to be on the mend, and his bandmates (as late as last month) thought he might still be able to launch a comeback. It’s unclear whether his death was related to his disease.

A true band in the sense that each member made important creative contributions, Slayer won’t ever be the same without Hanneman, who wrote the music and lyrics for many of Slayer’s most famous songs, including “Angel of Death,” “Raining Blood,” and “South of Heaven.” Like his bandmates, Hanneman was influenced by metal and punk, and at its best, Slayer played faster than any punk band and harder than any metal band. As a player, Hanneman worked in tandem with Kerry King as a co-lead guitarist. Sometimes they would play together on a song like this:

Other times, Hanneman would rip out blood-splatter solos that made your skull feel as if electrified chicken wire were being yanked back and forth through your ears, like on this song (starting at 1:45):

In “Angel of Death,” Hanneman wrote about Josef Mengele without a clearly defined moral point of view, which convinced some people that he was sympathetic with the infamous Nazi doctor. (For the record, he wasn’t, though he was interested in the Nazis and wrote about them often.) What really turned Hanneman on was evil in all its forms: hatred, murder, war, deceit. His music was about exploring the limits of what the human race can’t help dreading, or propagating. Now Jeff Hanneman has himself experienced what most of us fear the most. Reign in peace, wherever you are.