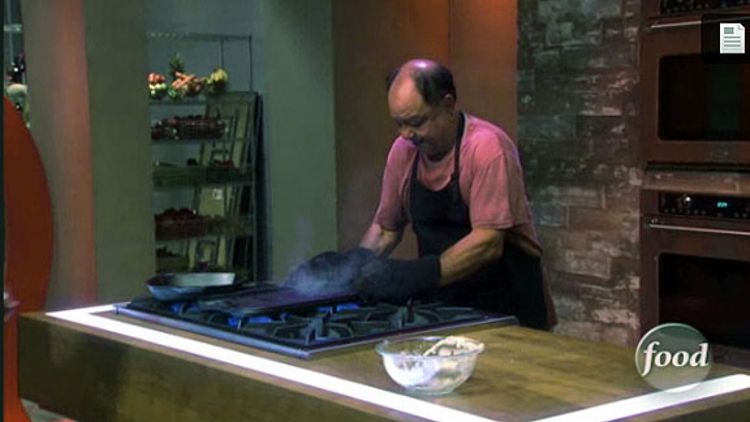 It’s hard to imagine Rachael Vs. Guy: Celebrity Cook-Off teaching anybody anything useful, save perhaps when to say no to class A drugs and elective surgeries, but most reality competition shows could learn a thing or two from the Cook-Off’s six-episode season. Six is plenty of episodes for this sort of horseshit. “On episode sixteen of America’s Next Master Cook, it’s Battle: Turkey Salami.” Enough. The third week of Rachael Vs. Guy may have sagged a bit, and how could it not have, what with the crushing losses of Big A Carter and Miss USA, but it’s all propped up by the fact that we are nearly halfway done. There are only three episodes left and then everyone on the show will be handed shovels and told to start digging and they will be all, “Why are we digging? Why does the hole have to be so big and deep?” and Food Network is just like, “It doesn’t need to be that deep, just big, but maybe you could get more leverage if you actually got inside the hole.” And then everyone goes to sleep for a while.

Both Team Rachael and Team Guy have three celebrities remaining, and this week the celebrities will be cooking mano-a-mano, which is not Spanish for “head to head.” Pitting the two teams against one another other leaves Rachael and Guy unable to judge the dishes fairly, and as this show is obviously all about fairness and precision and facts (weird how it’s not on the Science Channel), impartial judging is needed. Rachael introduces Scott Conant, Alex Guarnaschelli, and Marcus Samuelsson, three renowned chefs and frequent judges on Chopped, another reality cooking show where cooks from the suburbs have to ruin regular foods by adding licorice or cotton candy to them, and then one of the Queer Eyes says, “I’m sorry, you’ve been Name-of-Show’ed.” Lou Diamond Phillips is so starstruck that even his Kangol hat takes off its Kangol hat, out of respect. He watches Chopped “religiously,” which presumably means he uses the show to justify outdated attitudes toward women and gays.

The three Chopped judges each challenge the celebrities to cook their favorite dish. Up first is Samuelsson and his signature fried chicken. That is indeed a “famous” dish at the recently opened Red Rooster in Harlem, but it would be much more interesting if he made the chefs cook something Swedish, like he used to make at Aquavit.  “Dear Olympic swimmer and the ugly one from N’Sync, please give me your take on löjrom, a Swedish delicacy. It’s whitefish roe with an onion salad. Have fun with it! Use the space.”

Lou Diamond Phillips and Coolio face off in what I am calling the battle of the hats. They both have hats, which makes the two of them similar, but they have very different hats, which sets them apart. It is truly a study in contradictions.  For each challenge, Guy and Rachael mentor their celebrity. Guy’s advice consists of him saying, “You got this, bro?” Rachael just screams the name of her team member over and over in her hoarse cigarette-voice. It must be tough to edit this show what with Rachael Ray taking breaks every 8 minutes to lung like three Marlboro Reds and then gargle a party-size bag of salt & vinegar potato chips. It’s so intense how often she yells,“LDP!” It honestly started to lose all meaning for me. “Hell Deep Ee! El Teepee! Held Eepey!” In general, there is a lot of teammate cheering going on. “Cook that food! Chop those ingredients!” Let’s all settle down and stop faking energy. You’re all distracting Coolio, who almost forgot to add Sriracha to his homemade hot sauce. Hot sauce is definitely one of my favorite ingredients to add when I’m making hot sauce. It just makes it so much MORE hot sauce-ey, you know? Another good trick is to brew coffee with coffee instead of water. Your guests will really taste the coffee.

Speaking of cheering, someone who knew nothing about pop culture watching this show might think all these people were famous for being the worst at high fives. This show is filled with intensely uncomfortable near-missed high fives. Can you imagine a worse energy than the two seconds after Joey Fatone and Guy Fieri go to high five and instead just graze pinkies and then stop laughing and look at the ground? You can’t, because there is no such thing. If we could somehow harness the awkwardness of that moment, we’d have the power to send people back in time. Though if we could send people back in time, I’d surely make it so Guy Fieri’s parents never met, and then we’d never have that awkward moment responsible for the invention of time travel in the first place, and so on and so forth. It is truly the world’s greatest paradox.

The two remaining chefs are Cheech Marin and Summer Sanders, and they must make Alex porterhouse on the bone. Alex says, “My father used to burn down the house making this dish, literally.” Oh that’s so sad, that her father literally burned her childhood home to the ground while cooking and Alex had to live in a tent until they got a new house and then her father would set it on fire and destroy it all over again. What a horrible story! You have to ask yourself: is steak worth it? You have to ask yourself that.

While all three of Chopped judges’ favorite dishes can certainly be screwed up, and boy are they ever, it is funny how simple they all skewed. The judges were tossing the celebrities meatballs, as they say, though I wouldn’t trust these celebrities to make meatballs. “You all have to cook me my favorite dish, which is three pieces of white bread that are the same size, plus a side of an unpeeled banana.” Also their criticism is hilariously different from the sort of things they’d say on Chopped. “I like that this dish has crunch, and that all the ingredients fit on the plate.”

The winners are announced, and they are all upsets. Coolio, despite blasphemously putting cornstarch into his hot sauce, bests Lou Diamond Phillips’ friend chicken. Fatone may be Italian, but he made a marinara, not a tomato-basil sauce, and Dayne’s simple sauce wins. Cheech’s butter was boring, and Summer wins the steak-off. Everybody acts very shocked. There are probably tears.

Lou, Cheech, and Joey must compete in a ten-minute blind tasting to decide who goes home. Once again the blind tasting, given the short time limit and the celebrities’ limited mental capacity, is dumb as shit. They must all make grilled cheeses. That’s when you put cheese between bread and get it warm so it is toasted and melted. Maybe you’ve seen a literal child make one of these before in a Kraft Singles commercial? These guys have apparently not seen that commercial. Maybe Joey has. Like a correct person, he puts American cheese between buttered white bread and grills it. It is gooey and it is good. He puts a smiley face of tomato and pickles on it but who cares about that. He wins. LDP and Cheech, though, neither toast their bread nor melt their cheese. Did they not listen to Coolio’s advice, “Make those flavors coagulate”? I guess not. Cheech gets sent home and the Hispanic Scholarship Fund gets nothing. It is sad, and Rachael praises his “intuition.” What? I don’t think she’s ready to use that word. Maybe next week.

Max Silvestri is a comedian and a writer based in New York. Follow him on Twitter, where he mostly talks about food.