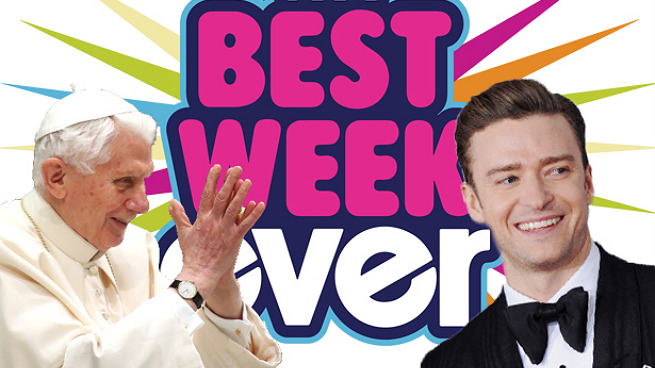 Well, at least those New York–based VH1 employees who were recently fired can agree with the network on one thing: We are not having the Best Week Ever. For the second time in its 10-year history, the program that celebrated the media of the week while putting beer money in the hands of thirsty comedians has been canceled. We may never take our panties off again.

BWE’s first cancellation was formally an extended hiatus from 2009 to 2013. Just before it was shooed away to its vacation, the show had been retooled to focus more on a single host, comedian Paul F. Tompkins, than a rotating multi-comedian panel (alumni include Nick Kroll, Patton Oswalt, Frangela, Paul Scheer, Jenny Slate, and Pete Holmes). It was renamed Best Week Ever With Paul F. Tompkins in a move to better position it to compete with E!’s The Soup. Depending on whom you ask, this was a critical mistake; after the show’s lengthy hiatus was announced, Tompkins blamed a lack of promotion and expenses (his own salary, the unionization of staffed writers) for the shelving, telling the A.V. Club that VH1’s decision was “kind of passive-aggressive. It’s a little disingenuous to say, ‘Hey, we’re going to bring Best Week Ever back, but in 2010.’ It’s like, well, ‘Fuck you, you’re not bringing us back, clearly.'” The return to the old format added insult to injury: “It hurts my feelings, because it’s sort of like saying that never happened. ‘That thing that we did? That never happened. We can all agree that never happened.'” And now it’s happening again.

At its best, Best Week Ever was like Mystery Science Theater 3000, with the B movies replaced with buzzy TV clips and the robots replaced by stand-up comics. At its worst, it was just layers of faces, boinging sound effects, and neon, but even when it reached the apex of cheesiness, it was still the best you could do if you, for some reason, had gone a week without the Internet and needed a highlight reel. It lent signal boosts to notable and meme-able moments like the “Best Cry Ever” from Intervention, and where else can we find Michael K. Williams’s Storybook Collection, which featured classics like “The Stumbly Wumbly Whore”?

When Best Week Ever began in 2004, we were still within what New York called “the first decade of the Internet,” when it took more than 12 minutes to download a single song. You checked your Friendster account. It was more expedient to get your highlights on Best Week Ever than wait for Oh No They Didn’t! to load on your crusty BlackBerry. While its forebears I Love the ’80s and I Love the ’90s were nostalgic event programming, when it comes to this week’s events, it’s now simply easier to stay up to date with your online pop culture outlet of choice (or Twitter).

Pop culture commentary programming isn’t extinct — it’s just evolving. The spinoff of the British hit series Gogglebox, Bravo’s The People’s Couch, premiered this year; the show features eight households, taped by robotic cameras as they react to the television they watch. Anthologizing responses to pop culture events is often a worthy pursuit (see: the Game of Thrones Red Wedding reactions), and given more than a tweet’s worth of time, something magical can happen. The problem is that usually by the time the week is over, we already knew who had the best week ever. Our attention spans have adapted to a very different schedule.

It seems fitting that BWE’s departure will be assuaged by Mystery Science Theater 3000’s return as a web series: In a time when we can take in content faster than it can happen, it makes sense to dig back into more than a week’s worth of past. There’s nothing better than the Internet when it comes to finding out what’s just happened, but discovering what to care about — whether measured in popularity ripples or personal interest — is a trickier system to hack. You can cater to a niche, like MST3K, or leverage a single passionate viewpoint to sell new content to people who might have otherwise ignored it. You create new content from the pre-web archives of the past. You can summarize and visualize social media’s reaction to last night’s Game of Thrones, but if you want to build a series around it, you better cast some robots. They come from the future, from next week, and by the time we watch it, so do we. May it be the best ever.

A Very Serious Conversation With Kip Winger About Being Taken Seriously, Prog-Rock, and Metallica's Scorn