Q&A: Olympus Has Fallen Director Antoine Fuqua on Blowing Up the White House, Morgan Freeman’s Singing Voice, and His Next Project With Denzel Washington 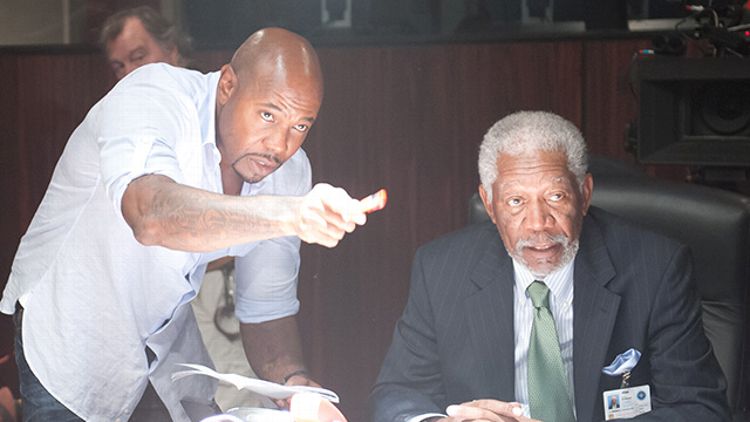 Ever since his bad-police magnum opus Training Day, director Antoine Fuqua has specialized in taking totally implausible, big-budget action movies and making them plausible: an Arthurian myth grounded in Roman history; an elite gunman who avenges a Cheney-esque government oil conspiracy; Richard Gere as a cop. For his latest film, Olympus Has Fallen, Fuqua takes on the holy mountain of action-movie clichés: the White House under siege by terrorists. Sure, it’s an over-the-top premise that demands an extra dose of salt and butter to swallow, but Fuqua takes it seriously. This is, after all, the guy who helped Denzel Washington combat the Academy’s antediluvian white-male tendencies and win a history-making second Oscar. So when we got a chance to talk to the guy behind the first of the two Die Hard–in-the–White House movies, we took it. Read on as Fuqua discusses beating the bejesus out of Melissa Leo, Morgan Freeman’s lovely singing voice, and why big-time Hollywood directors should be part of the national security debate. [Note: There are some SPOILERS ahead.]

Pretty much the main reason I’m excited to talk to you is because you blew up the White House and I always want to talk about that.

Yeah, huh? Well, the North Koreans are trying to do it, but their technology doesn’t look as good.

That’s for sure. It has to be fun figuring out how to take down the White House. What’s the first step in the science of White House explodology?

Click here for all of our interviews with fascinating people from the worlds of sports and pop culture.
Well, first I had to build it. I shot it in Shreveport, Louisiana, and there was nothing there. Literally, on the location scout, I got out and there was an empty cow field. That was the first thing we had to do, figure out how much we had to build, which turned out to be the whole North Lawn, all the rooftop stuff, all the stuff on the side where the cars pull up, the portico, and all the interior stuff. After that, I got together with some ex–Secret Service–type guys and SEALs and all those dudes. We met in a big room with a map and I said, “OK. Here’s my White House, how do I take it down?”

Who knew it was so easy? So what did they say?

They said, first of all, they would use everything that belongs to us. We kind of started with this conversation that Gerard [Butler] and I always used to have: What if 9/11 was a diversion? What if those planes were a diversion and they had another ground attack? So that’s how we laid it out: They would use our garbage trucks, they would use C-130s to get rid of the snipers on the rooftop. And they would need somebody on the inside. And that’s how I started to lay it out.

Well, any movie where you blow up the White House is almost by definition preposterous, but as I watched I did ask: Wait, could that really happen?

Hey, our brains our rewired after 9/11. Now we’re looking at it going, “Yeah, it could happen.” Before I’m not sure you could sell it. I mean, it’s fun and people enjoy it as entertainment of course, but as far as the reality, that gut feeling you get: It’s different.

For sure, we watch movies in a different way. I admit, what you did to the Washington Monument sent a slight shiver down my spine.

Yeah, it’s difficult to make those movies. I read someone had said some crowds might be divided, but it’s patriotic, too. One thing that happened on 9/11 in that tragedy is that people really came together, and that’s what I was really trying to create as well, the idea of let’s stay together, let’s keep our guard up. You know what I mean? You have to pay attention, just like that guy in Times Square, the vendor who saw that guy. He could have done some serious damage. The whole point is to stay alert, ’cause you get punched in your face when you don’t.

So this is actually just a multimillion-dollar public-service ad. Do you hope the Secret Service might screen Olympus Has Fallen to see if there’s anything they’ve missed — just in case?

I think they will. I mean, I’m pretty sure they will. Because the one thing the 9/11 Commission said was we were able to be hit because we lacked imagination. You know, in movies, we can make a fictional version of one scenario that could happen.

OK, there is a part of me, and it’s probably the anarchic artist part, that says it’s better to think about these things than not. Because once you’ve put it out there, you can maybe figure out what’s going on and what to do.

That’s the idea, to be thought-provoking and make movies that are at least good conversations to have as you walk to your car. You can say, “That was fun. It had some strong actors, but you think that can happen?” Then, boom, you’ve sparked a conversation. And I’m sure they do. At the White House, the guys I spoke to, they have think tanks that sit around and discuss all these things. I was told they do that, and I only hope they do.

Yet another way Hollywood and Washington are the same: Somewhere someone’s paid good money to sit around and think of all the possible ways to blow up the White House.

Exactly. Or any other horrible thing.

Maybe there could be a Patriotic Directors Commission; say you, Michael Bay, and Steven Spielberg could offer “How Would We Blow This Shit Up” seminars.

Well, they did those things right after 9/11! They had meetings, and they came to Hollywood to talk to some people. They didn’t talk directly to me, but they talked to some other people. They should’ve talked to me because I have a different perspective on it. But they should do stuff like that, just to kick it around. It couldn’t hurt.

So then, what’s the most surprising thing you learned making this movie?

I learned a lot of things, some I can’t talk about. What I did learn is we’re well prepared. These guys got some things! I would really tell a terrorist to not think about doing that. We’ve got some serious shit; 9/11 woke up a monster.

I was hoping you’d accidentally give away the secret to actually destroying the White House. Well, what about a hilarious fun fact about the Secret Service?

Nothing funny, but I know they’re do-or-die. They stay with these guys to the end. Ronald Reagan’s people were with him at the grave. They go all the way, man. [Thinking.] Well, the thing we learned about them is that they’re really human. And they like hookers!

Ha, do they ever. I do appreciate that in your movie the Secret Service agents crack a joke or two. In pretty much every other movie, they act like they’re at Buckingham Palace.

They’re just regular guys, man. They crack jokes, they got that gallows humor. They’re fun guys. Unfortunately, they can’t publicly have fun, i.e., they can’t go to Colombia and have fun.

Nice. Well, I bet anything they’re cracking some nasty jokes over those earpieces.

For sure, and they’ve got some crazy nicknames. They come up with all kinds of nicknames. Because you get to pick your own nickname and it can be based on whatever you want, so they got some funny shit.

Appropriately badass. Mine would probably be Irritated Llama.

Well, we got a website, you can go on there and put your name in and it will come up.

Perfect. You gave me something to link to.

You just don’t want it to be like Tequila Surprise. Make something good up. Even if it comes up with like, Bubba Gump or something, you got to come back and say it was “Gunner.”

Let’s talk about the impressive cast you had, i.e., Morgan Freeman. I bet he even snores presidentially. Do you really have to give him any direction?

Yeah, he’s just Morgan. It’s hard to say “Be presidential” because he’s kind of that way anyway. The thing I learned about Morgan is that he’s really fun. I didn’t realize how funny he was. And he likes to sing. The guy can sing, like Peggy Lee songs. In between takes, he’d just bust out in song. He had the whole room cracking up — all of a sudden he’d start snapping his fingers and jamming.

Melissa Leo’s scenes were brutal. She can sure take a punch.

How do you pitch that to an actress? “So here, I’m thinking you get the crap kicked out you.”

Something like that! With Melissa I would say, look, we’re dealing with terrorists and they’re not kind. Everything about them is brutality and humiliation. They want to break your spirit, and some people they kill just to make a point, to control the room. They’ll [beat] a female just to let you know how far they’ll go to get what they want. And she got it. She said, I understand. That’s terrorism, that’s the idea.

So I have to ask this: Every so often Hollywood decides to make two version of the same film back-to-back: Dante’s Peak and Volcano; Deep Impact and Armageddon; Mirror Mirror and Snow White and the Huntsman. Now, after yours will come Roland Emmerich’s White House Down. What it’s like as a director working under those circumstances?

You know, I didn’t really put a lot of thought into Roland’s ’cause we’re so different. Our visions as directors are so different. In a way, I’m looking forward to seeing his; I’m curious how they approached it. The good thing on their end is, they get to see mine and get to adjust. They can outdo it if they can — they got the money, it’s Sony! But Jamie [Foxx] is a good friend. Channing Tatum is a movie star and it’s Sony and Roland Emmerich. So, it should be fun because now I can see see how they destroyed their White House, and I can see how much fucking money they had!

Well, Roland does have previous White House–exploding experience on his résumé. But I bet we won’t see the secretary of State get the crap kicked out of her in his.

Seriously. I’m sure it will be funny as hell with Jamie, you know? Him playing the president, you got to laugh just thinking about that, you know what I mean? It’s fun, man. It’s all good.

I read just before you called that you’re circling The Equalizer movie at Sony. Can you talk about that?

What did you read?

You’re doing a movie version of the cult TV series The Equalizer with Denzel Washington.

Wow. That’s out there already?

This stuff moves at the speed of tweet these days.

I love it, man. Listen, with him the best of me comes out for sure. I think I get things out of him that other people can’t. He’s the best and I’m so excited to get back on the field with him.

Does he sing in between takes?

Not at all. But you better be ready.